Are these two groups of trees the same in the Chronicles of Narnia?

In at least two books of C. S. Lewis's Chronicles of Narnia, a group of "four trees" is mentioned.

Shortly after Digory has planted the tree to protect Narnia in The Magician's Nephew, his Uncle Andrew is brought forth to be shown to Aslan. Andrew Ketterley is put in a cage made of trees.

"Digory now saw that where four trees grew close together their branches had all been laced together or tied together with switches so as to make a sort of cage."

Then, when Peter, Susan, Edmund, and Lucy Pevensie are wandering about Narnia in The Lion, The Witch, and The Wardrobe, Mr. Beaver brings them into a spot to talk to them.

"Only when it had led them into a dark spot where four trees grew so close together that their boughs met and the brown earth and pine needles could be seen underfoot because no snow had been able to fall there, did it talk to them."

The Lion, The Witch, and The Wardrobe

My question is, are these two sets of trees the same? Both passages reference them being "four trees" and growing close together. The wording is also very similar.

Are they the same? Is it meant to connect the books? Or did Lewis just unintentionally use a similar landmark and similar descriptive language in two books that were years apart?

Nice find! I'd never noticed this.

Surely they can't be the same trees ...

There's sooo many years between the two books (around 1000 years!) that the original trees would be either long dead or far too massive to stand between. Note that in The Magician's Nephew they're so close together that their branches can be used as a prison to contain a grown man, and that's when they're still young trees. In a thousand years of growth, their trunks would expand so much that they'd be basically one tree instead of four, and certainly there wouldn't be enough space enough between them that beavers and children could easily get into what had been a valid prison a millennium earlier.

For reference, here's a real tree which is thought to be 800-1000 years old, with humans for scale: 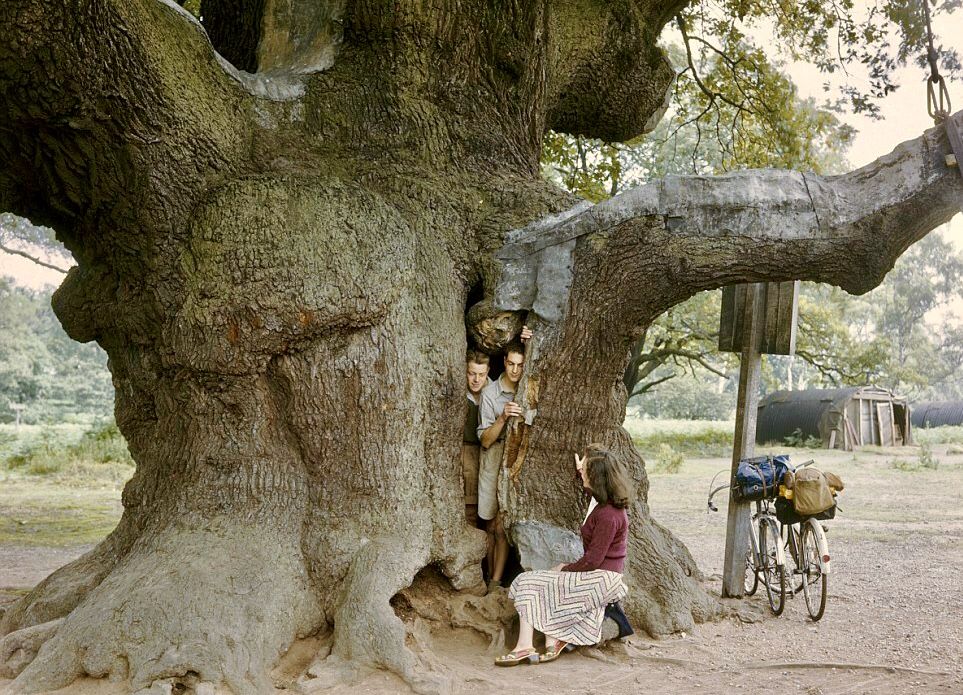 ... but it's definitely interesting that the same description is used.

Lewis made a lot of intentional parallels between The Magician's Nephew and The Lion, the Witch, and the Wardrobe, especially in descriptions of places - the lamppost being the most obvious example. The similarity you've noticed is so close that it seems like it must have some significance, but I don't know what it could be since the trees can't be literally the same ones within the story. Maybe there's some kind of Christian symbolism in four trees close together??

Not the answer you're looking for? Browse other questions tagged the-chronicles-of-narnia cs-lewis or ask your own question.

10
Which Narnia book corresponds to which planet?
9
What happened to Father Christmas' gifts to the Pevensies?
8
What happened to the humans in Narnia between the reigns of King Frank and Queen Helen, and that of Jadis?
9
Where did Mrs. Beaver get a sewing machine?
11
At what point did C. S. Lewis decide that humans were a normal part of Narnia's world?
12
What's C. S. Lewis's obsession with clean, dry swords?
11
What became of the rings buried in the Magician's Nephew?
42
How did Jadis, The White Witch, obtain the right to kill a traitor in Narnia?
14
Is the repetition of "faster than you can say Jack Robinson" deliberate in C.S. Lewis' books?
4
Is this scene in "The Triumph of the Witch" a deliberate allusion to the Bible?