Many modern fan sites covering the Mobile Armored Strike Kommand (MASK) franchise say that Matt Tracker and Miles Mayhem were originally partners, but that they split up to form MASK and Venom respectively after Mayhem killed Tracker's brother.

Is there a canonical source from either the 1980s toyline, animated series, or comic that covers this (and if so, where may I find it)? Or was this introduced later the later IDW comic series or is fanon?

Yes. This is sourced in Kenner’s promo mini-comic #1, Flaming Beginnings, published by DC Comics and released in 1985 with first generation of toys. These comics were packaged with the first vehicles released. 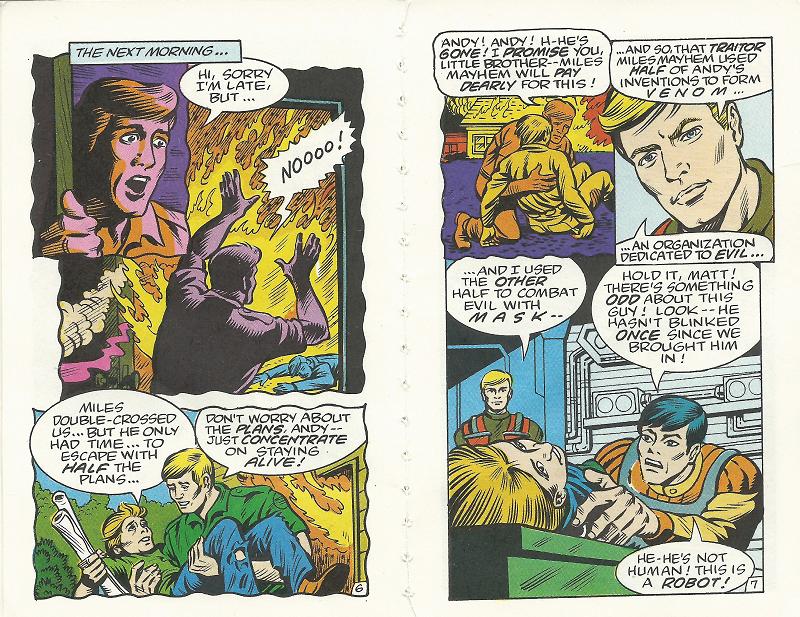 As a promotional advertisement branded by Kenner, the implication is the story was intended to apply to the toys, which predated the cartoon and cartoon story which was developed from the toys.

3
Spider-Woman (616) sticks to walls with an adhesive fluid excreted from her pores. Is there a comic-source for this?
3
Is Agent Alpha from the MiB cartoon canon?
2
Do we know anything about DareDevil's (Matt Murdock's) Mother from the comics continuity?
8
Which source DC comics does this page (featuring the Batcave Frank Springer 1968 white/red-shaded version Repost for Batcave Batman #203) come from?
3
Is there anything in Marvel canon comparing the power levels/abilities between Johnny Storm (The Human Torch) and Jim Hammond (the original Torch)?