What did Kirk mean by "Wheels"?

In the Original Series Star Trek episode A Piece of the Action, when Kirk and Spock have commandeered an automobile, Kirk says, "Wheels, Mr. Spock!" Are wheels obsolete, or at least very rare, by the 23rd century so that Spock might be unfamiliar with them, or was he just using a slang term for a car, as in "We got ourselves a set of wheels!"?

"Wheels" was a slang term for cars back in the 1960s and 1970s. Maybe earlier and later as well, but certainly during those decades.

Kirk isn't surprised at seeing wheels (the round things on the car.)

Kirk is making use of his knowledge of outdated slang. Outdated in his time, at least. Viewers in the 1960s understood him perfectly well.

In a way, both Kirk and Spock flubbed it.

Kirk used an expression that was from a few decades later - he used old slang, but not old enough.

Spock corrected him to a more era appropriate term - "flivver."

Flivver belonged more to the era of the 1920s Chicago gangster, but would have usually referred to a Ford Model T rather than the newer, bigger car they drove off with.

Kirk got the wrong era.

Spock got the right era, but the wrong vehicle.

From the transcript available online, Kirk’s statement is not exclamatory, but declarative with a “period.” I don’t take that as authoritative, and Shatner always makes discerning between declarative vs. exclamatory statements nearly impossible.

But taken in context of their immediately following discussion where both appear familiar with workings of an internal combustion engine automobile, but not skilled in operation, I take its usage to be slang.

The episode spawned a licenced fotonovel. As you can see from the cover, Kirk and Spocko are using their limited supply of urban slang (in Kirk's case, gleaned from his own knowledge of 1920s American slang and the info he got from his copy of 'Chicago Mobs of the Twenties') to express their desires.

In this instance it's a set of wheels he's after, along with a heater and a flivver. 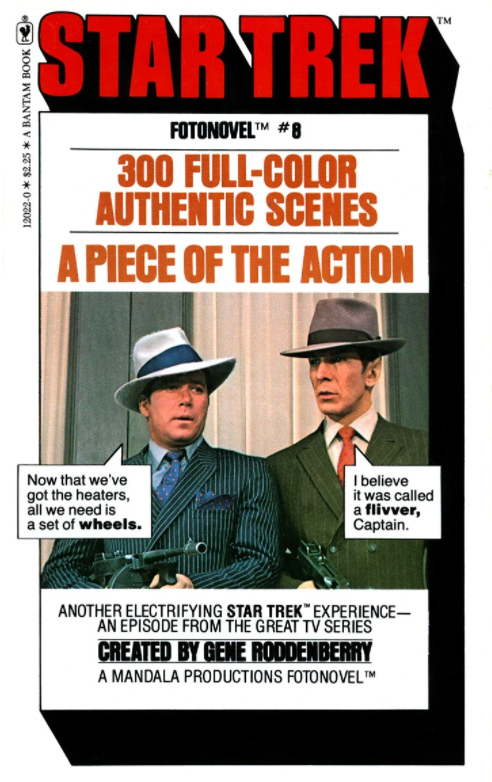 24
How did Kirk get the whales out?
54
When Did Vulcans Change from No Emotions to Buried Emotions?
39
How did humans and vulcans communicate in Star Trek: First Contact?
15
Is there anything more to the way others mistreat Spock?
16
Why are Star Trek ships (mostly) built by hand?
48
What's the deal with "marshmelons"?
5
Were there any named, blue beverages in the original Star Trek series?
9
Changing mores: Were there any viewer complaints when Dr. McCoy called Mr. Spock a "half-caste" in TOS or did the context make the term excusable?
3
What is the correct process for Landru to absorb an Archon?
15
What's the earliest point in human civilisation that anyone has time-travelled back to, in Star Trek?