Basically, what the above says; there's this book that I remember reading a long time ago in a library that I did read a few times and remember most of the plot to, but I can't remember the darn title or the names of some of the characters. For context here, I would've been reading it sometime around the age of 13-14, back in around 2007.

The book itself is, again, a young-adult book about time travel with that tagline on the cover. As for the main theme, it stars a boy who is friends with a professor who basically invents a time machine that resembles a calculator. No, it isn't Strange Attractors - rather than it being a story about someone trying to steal the time machine and the like, the book is more of a collection of short-stories revolving around the boy and some parts of his life, not necessarily all about time travel but not necessarily in chronological order either.

Main highlights of the story that I can remember:

That's all I can remember about the book. Which sucks because I do remember reading it a lot, but I can't even find any hints about what the book could be. Hopefully someone here has an idea? 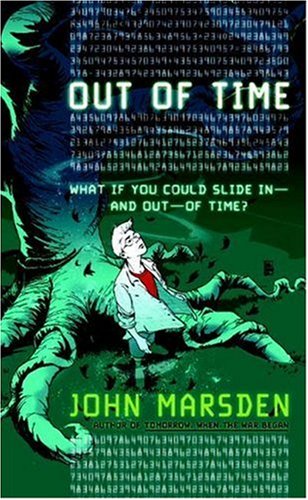 The cover shows the tag "What if you could slide in - and out - of time?"

He thought at first that he was looking at nothing more than a mathematical calculator. Mr. Woodforde had assembled all the pieces into a black case that resembled either a calculator or a remote control for a television. There were four panels of buttons, two aerials and a screen, but they were all on a small enough scale to be fitted into a hand-sized case.

He prised open the cover of the little battery compartment and pulled out the battery. Bright, bright silver, it was like no other power source he had ever seen. It was tiny; the size of a gambling die. And the shape of one. But it was surprisingly heavy, weighing more than all the rest of the machine.

It has a lot of power, and can't be recharged:

"I'll be," he muttered. "Talkative little fellow aren't you? Look," he said, "you don't recharge them. They're not like a battery. But on the other hand, you can't run them out either. Well, not that anyone's been able to so far. If you've been running your torch off it, then I guarantee you a few millennia of bright light yet. Matter of fact, you could keep this base lit up for way past your lifetime, just on one of these little beauties."

Not the answer you're looking for? Browse other questions tagged story-identification books time-travel young-adult or ask your own question.

15
Looking for young adult book, possible from the last 10-15 years
6
Boy travels through time using a calculator
10
Book Identification: young adult sci-fi, I think it was published in the 60s or 70s
28
Young adult short story book with one story where a woman finds a walrus suit and becomes a walrus
10
Book/book series set in the future about an elite academy, a great inventor, a time-travel machine, and a brother and sister
3
Book about a boy who is given a time travel device by his much older self from the future
4
Time travel book series with a shark sky pirate and a group who call themselves emperors
14
Children's novel about a boy and girl who slip back in time to the Roman days in England