I found this novel in English at my local library in the mid-1990's, but the book itself looked like it was from the 1950's or 60's. If I remember correctly, it had a picture of an astronaut in a space suit on the cover.

In the story, an American astronaut travels to an already-established Lunar colony and gets involved there in investigations into unexplained phenomena. The phenomena turn out to be aliens, and the protagonist is abducted while on an away mission and whisked away to an alien zoo. There, he discovers that the aliens have time travel and have been abducting humans from many different time periods to fill their zoo. He ends up working together with an ancient Roman soldier to escape.

Some particular specifics of the story that I remember:

The author goes into detail on space suit mechanics and configuration. Early in the story, the protagonist has a pharmacist install a narcotics dispensing system into his helmet, and this is portrayed as a normal practice and not at all shady or illicit.

The scene in which the protagonist meets the Roman soldier takes care to explore the language barrier. The protagonist's attempts to speak English to the soldier are rebuffed as barbarian talk. The protagonist then remembers that he speaks Spanish, which is a descendant of Latin, so he tries greeting the soldier in Spanish. This turns out to be close enough to the soldier's dialect for mutual intelligibility (and for the soldier to recognize the astronaut as a civilized person), and they are then able to make a plan to escape the alien zoo.

At some point in the story, the protagonist receives a major upgrade to his space suit (or perhaps a brand-new suit) that has improved visibility and flexibility.

This is Have Space Suit, Will Travel, a young adult novel by Robert A. Heinlein. Some of your memories are not precise.

The "astronaut" is a young man, Clifford "Kip" Russell, who wins a surplus space suit, initially not in working condition, in a contest. He could trade it in and receive a money prize instead, but chooses to repair it into working condition. He has been working the soda counter at a pharmacy, and persuades his physician to write prescriptions for the drugs to install in the standard medical dispenser inside the helmet. While testing the suit in his back yard, he and two other beings are abducted by human agents of aliens and taken to the Moon. He and the other prisoners try to escape, but are recaptured and taken to Pluto by the actual aliens (which Kip nicknames "wormfaces") where there is a secret advance base from which the aliens intend to take over the Earth. They are not in a zoo; they are imprisoned so they can't alert Earth governments to the invasion. While signaling for help, Kip gets severe frostbite. However, benevolent aliens from a planet around Vega take the escapees to their world; this is where Kip's suit gets the upgrade.

The galactic government decides to investigate the wormfaces and incidentally the humans. The government reaches into Earth's past and brings in a Neandertal and a Roman soldier as samples to judge how quickly humans are evolving. You remember the language scene very well; the Roman soldier claims that he will fight their captors, but before any attempt can be made, they are taken to the inquest.

P.S. I wanted to add the dust jacket you probably saw according to your description. 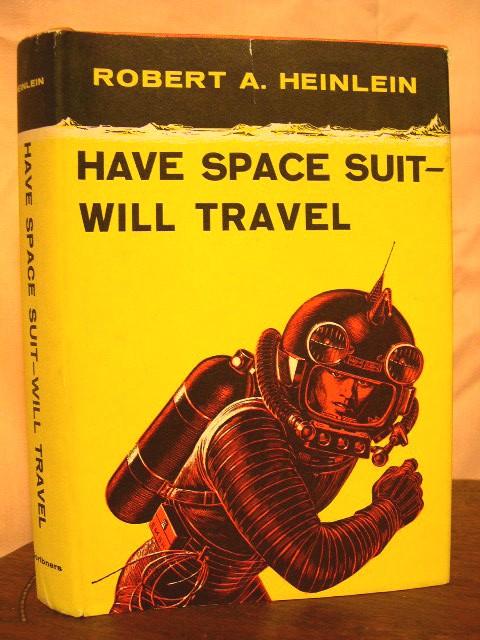 There are enough elements here to make me think of R.A. Heinlein's "Have Spacesuit, Will Travel".

There is also significantly more happening, including aliens who believe Earth is uninhabited by anything intelligent, and can therefore be cleansed before being occupied, and another race who act as "guardians" of less developed species.

That's about all I can recall at this time, though.

9
Trying to recall a story involving two observers in space stations who kill an alien, conspiring via music
21
Short sci-fi book: astronaut boards ship, becomes indoctrinated and traps future astronauts
7
Old short story about a man who literally sells the knowledge he gains and is a fan of Don Quixote
11
Short story where astronaut crash lands on Jovian(?) moon, builds "sail wagon" to try to reach help?
25
Old sci-fi story about shadowy aliens who surround Earth to protect it from solar flare, tragic misunderstanding by humans?
5
What is this '90s–'00s sf movie with a Guyver-like, Max Steel-like bio suit?
8
Novel with space suits made of strange material, disruptor knives that melt people, and nonhuman characters
8
short story involving symbiotic space suit and a war against aliens
8
Book series about teens who work for a time travel agency and meet a Roman soldier