Were Vi and Jinx hinted to be siblings in the games?

Obviously, in the series Arcane, Vi and Jinx are shown as siblings from the beginning, back when the latter still went by Powder. The games, however, appear to be in a different continuity, and a glance through various wikis suggests that the backstory given on the show was not presented in any game canon source.

As such, were they ever hinted to be siblings in the games or associated lore before the release of the series?

For long time, the community has theorized they were siblings1, but RIOT never confirmed it, until Arcane.

When Jinx was first announced ( during September 2013, which was after both Caitlyn2 and Vi were released on January 2011 and December 2012 respectively) this came with a message in the Vi's champion description on the league of legends website, wich was "vandalized" by Jinx. It is called "X WUZ HERE". There, Jinx insults Vi in various way, making fun of her voicelines in the game.

Shortly before Jinx release, another post came on RIOT forums, this time it was Vi addressing Jinx and swearing to stop her - with a punch in the face, as usual. The post is called "Mayhem Everywhere You Look".

When Jinx was finally released, we had a look to her splash art, which resembled the Vi's one, but destroyed. This has been further confirmed by RIOT itself - this message popped up when they introduced the messages in the loading screen. 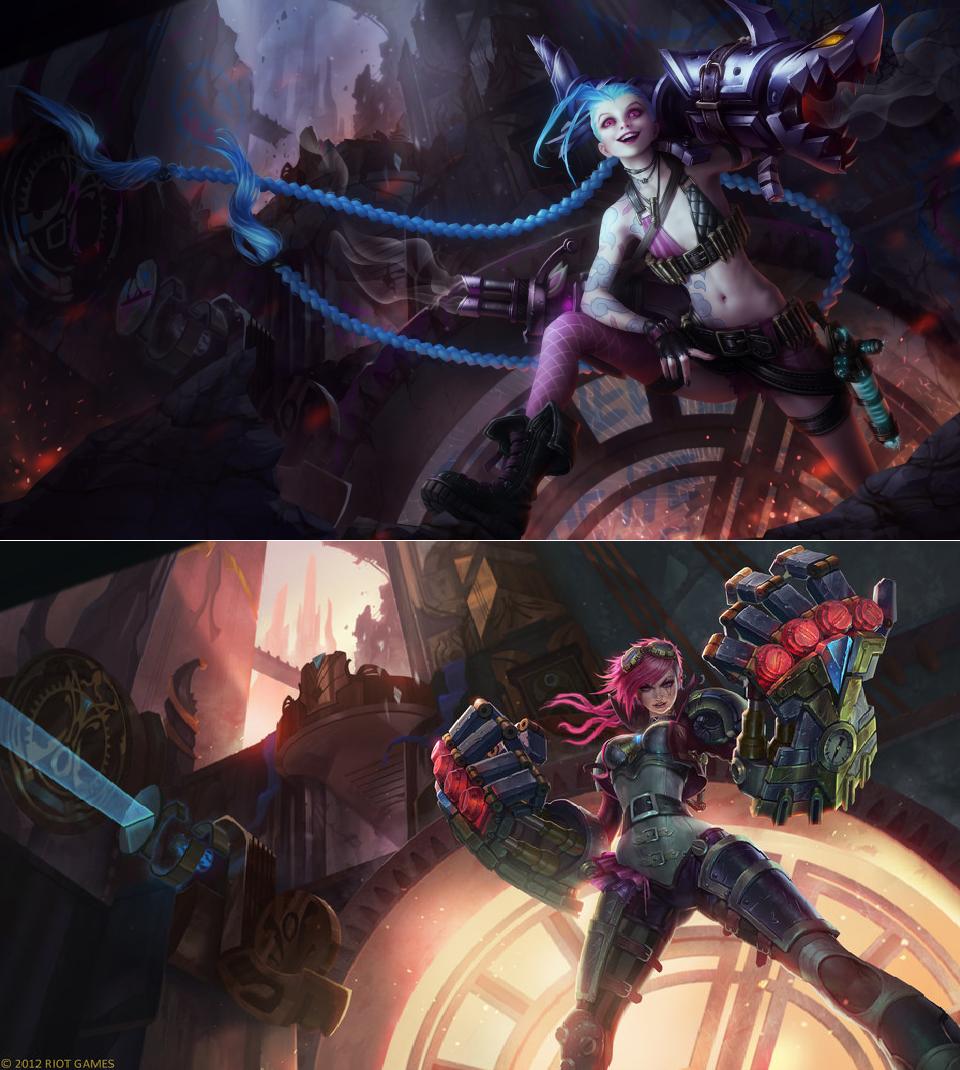 First, we can observe that Jinx has some dialogue lines made especially against Vi's, mocking her catchphrases, theme song and such3. But then, there is one line which started everything.

"You think I'm crazy? You should see my sister!"

Assuming Jinx is telling the truth, this line states that she has a sister, and since the close relationship between Jinx and Vi, they were speculated to be sisters for a long time.

This speculation reached RIOT, which in return, made another in-game joke, this time with Hermit, the shopkeeper in the Howling Abyss map for the red team.

Here, if you are paying as Vi, the shopkeeper will occasionally says

"You look like your sister! Er, wait, I'm not supposed to talk about that..."

Vi on the other hand have only a minor cosmetic buff if there is an enemy Jinx, called "Catch me if you can!"4.

On last note, it's important to note that question about Vi and Jinx being sisters can be found even before Jinx release! On October 3 2013, 10 days prior to Jinx release ( but after X WUZ HERE, Mayhem Everywhere You Look ) the so-called Jinx team posted an AMA on reddit. One of the hottest topic was indeed if Jinx and Vi were actually siblings, and RIOT Ransom said on the matter:

Not sure why this is such a hot topic. Vi and Jinx don’t behave like siblings at all! I mean, they’re always bickering and making fun of each other, and that’s not very sisterly, right? Actually, wait a minute… Perhaps this topic DOES merit some further consideration. So here’s what we know: Vi claims in Jinx’s teaser that she has no idea who Jinx is or where she came from. So if these two are related, Vi clearly hasn’t gotten the memo yet. Which is interesting, and there’s also the fact that we don’t know a whole lot about Vi’s past as a street urchin. So who knows? Seems like there are a lot of interesting story paths this rivalry could go down. I can’t wait to see how it will play out!

1: While I can't research for every single post regarding this theory, after a fast search I found out one post dated July 2014 on reddit wich dig in the question.

2: Caitlyn has some connection with Jinx as Vi, but Vi seems to be a lot more closer - one way or the other - to Jinx based on much Jinx "target" Vi instaed of Caitlyn.

4: The buff itself is just an icon wich keep count of how many times Jinx killed an enemy Vi and/or Caitlyn or how many time a Vi or Caitlyn have killed an enemy Jinx. On second note, is important to remember that Vi voice over never received an update ( writing this on November 2021 ) and since Jinx was not yet conceived, she had not special lines with her.

Short answer no. They are actually just rivals.

Jinx’s bombastic spree seemed endless, with the wardens’ attempts to catch the culprit thwarted at every turn. She began tagging her works of destruction with vivid graffiti, and other taunting messages directed at the city sheriff’s newest ally in the fight against crime, Enforcer Vi.

Jinx’s reputation grew, leaving the people of Zaun divided as to whether she was a hero for sticking it to the arrogant Pilties, or a dangerous lunatic for escalating existing tensions between their two cities.

After months of ever-increasing carnage, Jinx unveiled her biggest plan yet. In her trademark electric pink, Jinx daubed the walls of the Ecliptic Vaults—one of Piltover’s most secure treasuries—with a very unflattering caricature of Enforcer Vi, and the details of her own intention to rob the stores within.

An uneasy sense of anticipation settled on Piltover and Zaun leading up to the promised date of the heist. Many doubted even Jinx would have the guts to show up and risk almost certain capture.

When the day arrived, Vi, Sheriff Caitlyn, and the wardens prepared a trap for Jinx outside the treasury. But Jinx had already smuggled herself inside by way of an oversized coin crate that had been delivered days before. When Vi heard pandemonium erupt from inside the structure, she knew the wardens had been outclassed once again. She burst into the treasury, and the ensuing confrontation left the Ecliptic Vaults a smoldering ruin, and the merry mischief maker Jinx nowhere to be found.

Jinx remains at large to this day, and is a constant thorn in Piltover’s side. Her schemes have inspired copycat crimes among the chem-punks, as well as numerous satirical plays lampooning the incompetence of the wardens, and even a smattering of new colloquialisms throughout both cities—though no one has yet had the courage to call Enforcer Vi “Pretty-in-Pink” to her face.

Jinx’s ultimate endgame, and her obvious obsession with Vi, both remain a mystery, but one thing is certain: her crimes are continuing and growing in sheer audacity.

In Vi's biography her story does seem similar to Arcane's version, she grew up an orphan and was taken in by the local barkeep. I guess they made the obsession part more about her (Jinx) sister (Vi) abandonning her, where as in the games lore, it's simply that Jinx is a lunatic and Vi has been put in charge to stop her.

Not the answer you're looking for? Browse other questions tagged adaptation-comparison arcane or ask your own question.

6
What books does the Hunger Games movie span?
12
How close is The Hunger Games movie to the first book in the trilogy series?
6
Why were the Elven cloak's abilities not utilized more?
15
Were the sizes of the armies in Peter Jacksons' LOTR movies true to the books?
7
In Mockingjay Part 2, what pods were in the book but not in the movie?
5
Prophecy regarding Ciri: differences from the games?
11
What are the differences between the book Contact and the movie?
4
Were Hecate and Miss Cackle's personalities based on the books?