It's a long shot, but anyway I'll give it a try. When I was very young, my grandma and I once lay in bed watching a SF or Fantasy movie. It's one of my earliest memories, it should have been in 1992-1995.

I just remember one scene: several white people were talking in a house (or a castle). Above them there was a portrait on the wall. Suddenly a powercut happened. When lights (maybe candlelights) were back on, there was a gruesome change in the facial expression of the person in the portrait. Those people didn't notice the change because the portrait didn't speak. It seemed the portrait had a ghost in it. The movie had a gothic feeling to it.

The changed portrait reminds me of the following picture of artist Salvador Dali: 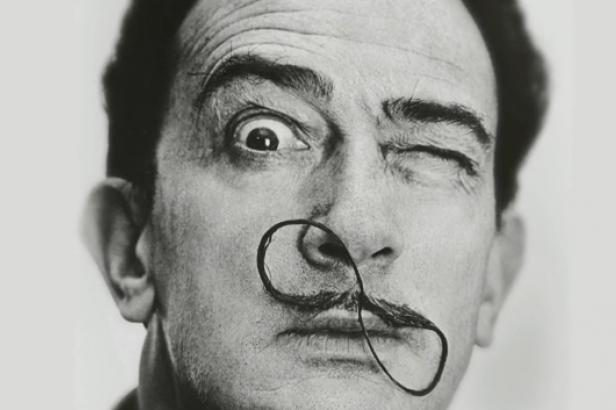 I'm Chinese. The TV set that my family had was black and white, so I don't know whether the movie was colored or not. I'm sure it's a foreign movie. Back at that time our local TV station broadcast many interesting foreign movies, but I can only find one: Dreamscape (1984)

Kinzle stated in the comments that it could be Cemetery Man, so I'm posting that as an answer.

Francesco Dellamorte (Rupert Everett) is the cemetery caretaker in the small Italian town of Buffalora. He lives in a ramshackle house on the premises, constantly surrounded by death, with only his mentally handicapped assistant Gnaghi (François Hadji-Lazaro) for company. Young punks in town spread gossip that Dellamorte is impotent. His hobbies are reading outdated telephone directories, in which he crosses out the names of the deceased, and trying to assemble a puzzle shaped like a human skull. Gnaghi can speak only one word: "Gna."

The Latin inscription over the Buffalora Cemetery gate reads RESURRECTURIS ("For those who will rise again"), and indeed, Dellamorte has his hands full. Some people rise from their graves within seven nights following their deaths, as aggressive zombies. Dellamorte destroys these creatures, which he calls "Returners", before they overrun the town. Buffalora's mayor (Stefano Masciarelli) is so fixated on his reelection campaign that he doesn't register Dellamorte's pleas for an investigation. Being an outcast in the village and almost illiterate, Dellamorte doesn't want to lose his job. He opens up to his only friend, Franco, a municipal clerk, but doesn't file the paperwork to get assistance. He explains, "It's easier just to shoot them."

At a funeral, Dellamorte falls in love with the unnamed young widow (Anna Falchi) of a rich, elderly man. She is won over when Dellamorte tells her about the ossuary, which she adores. While consummating their relationship by her husband's grave, the undead husband arises and bites her. She seems to die from the bite, but the coroner claims it was a heart attack. Fearing the worst, Dellamorte stays near her corpse, and shoots her when she rises.

From the TV Tropes page for Creepy Changing Painting:

The old man's headstone portrait in Cemetery Man changes expression from serious (at first) to smug (when Francesco realizes that She is the old guy's widow) to anger (when She and Francesco are having sex on his grave).

This is a bit of a longshot, but some elements match so I'll let you make your own conclusions. The movie that came to mind when reading your text was "The Haunting", released in 1999, so a little later than your proposed timeframe. It features a haunted portrait that indeed has a ghost in it, and the location is in a large mansion/castle-like building. The movie has a gothic feeling to it, but I can't recall whether or not the portrait changes its facial expression.

Here's a pic of the haunted portrait as well: 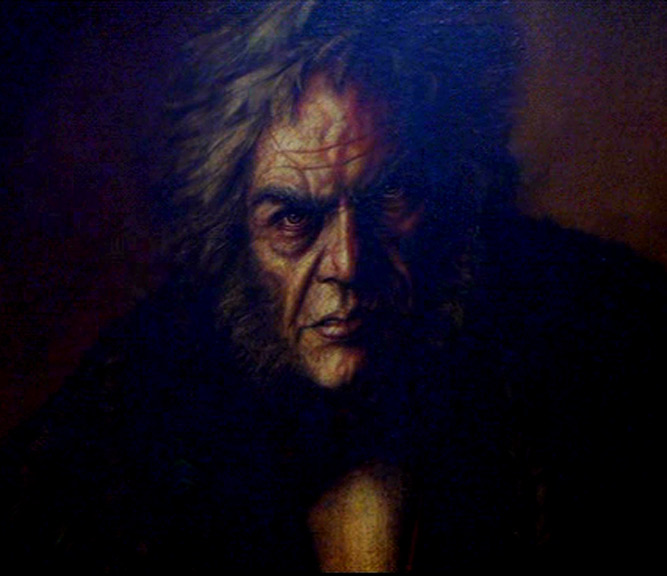