How many different times total has Boba Fett escaped the Sarlacc in any official story?

It appears that many entertainment news media are reporting this healing scene as associated to Boba’s escape from the Sarlacc.

But, the trailer’s banner text

Managed to hearken me back to Boba Fett’s various Legends’ experiences.

Just how many different official escapes — including any differing accounts of Fett’s escape where details or events are substantially different — has Fett made from the Sarlacc, even if some of them may only be Legends continuity? For clarity, I not asking how many different times has Fett escaped from a Sarlaac, but how many different accounts / tales have been told of his escape from Jabba the Hutt's Sarlaac, the one that we see Fett knocked into during the rescue of Han Solo.

The earliest account of Boba escaping the Sarlacc was in the 1983 Marvel comic Jawas of Doom (Star Wars #81), in which the Sarlacc apparently vomits him up, with his memory erased. He gets picked up by Jawas, and helps out the heroes, who he doesn't remember as enemies: 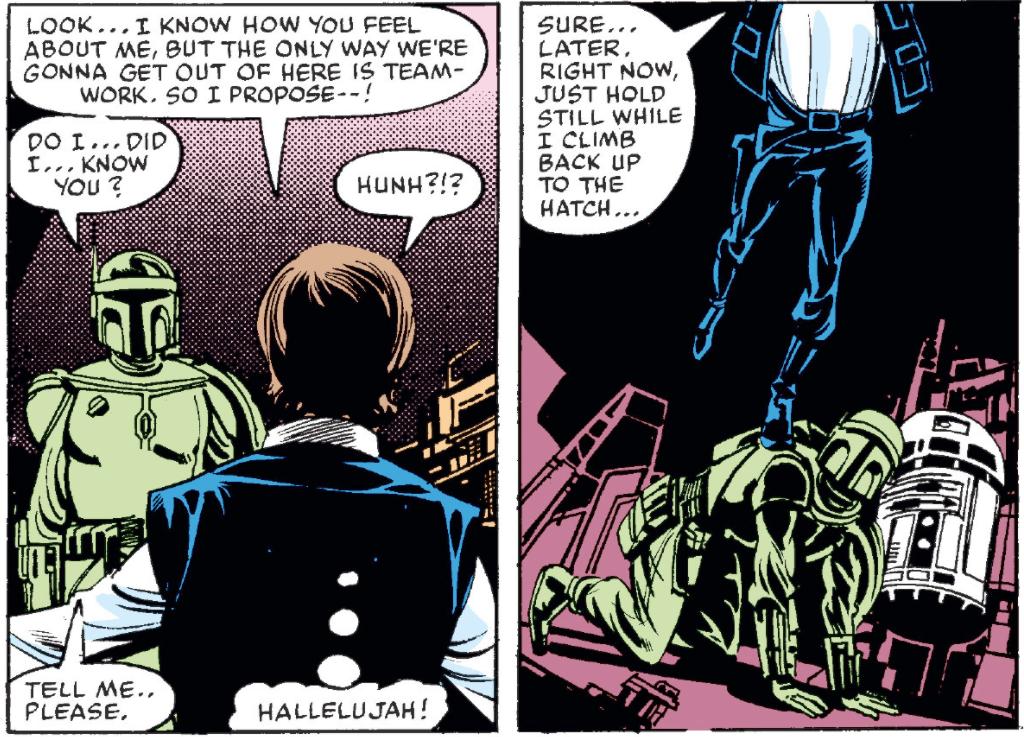 By the end of the issue, he gets his memory back, but falls back into the Sarlacc along with a Jawa sandcrawler. Escape count: 1

The next time he reappeared was in Dark Empire (1992), set six years after Return of the Jedi, which doesn't demonstrate his escape, but mentions that the Sarlacc found him "indigestible": 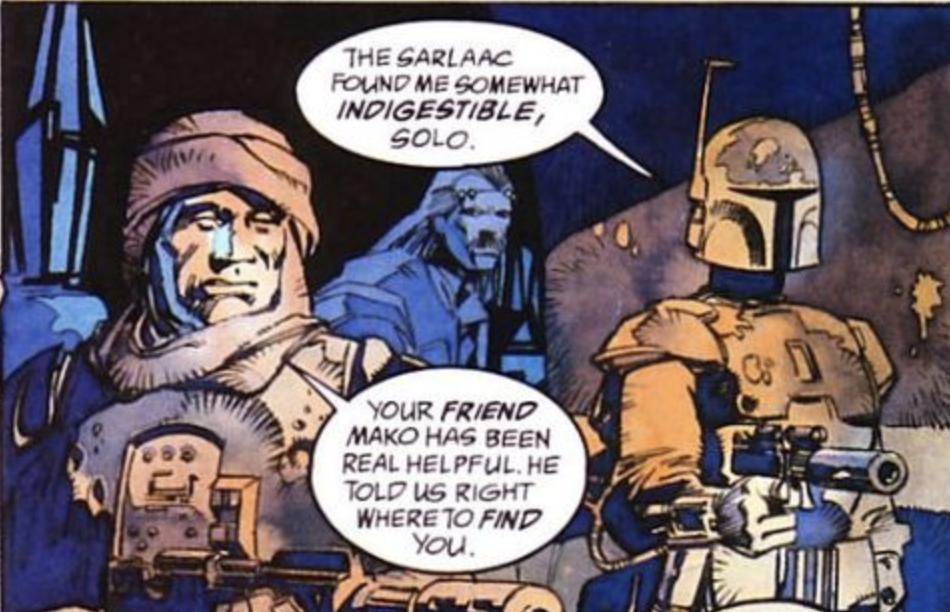 This comment is in response to Han saying "Boba Fett! But you're dead!", so it's implied that this is the first time the Rebels have seen Boba Fett after he fell into the Sarlacc pit.

The idea to bring Boba back was writer Tom Veitch's own, according to a 2005 article in the Bennington Banner citing Star Wars Insider issue 30:

One character Veitch and Kennedy brought back was bounty hunter Boba Fett. In “Star Wars Insider” issue 30, Jon Bradley Snyder interviewed Veitch about the resurrection of Fett, who was “eaten” by the Sarlacc pit monster in “Return of the Jedi.”

Veitch replied that he knew they could “bring back the Emperor, but nobody said anything about bringing back Boba Fett. As I worked on the plot, I researched fan feelings in Bennington, where ‘Star Wars’ role-playing was all the rage. Out of those heated discussions, one theme predominated: Bring back Boba Fett.”

“Part of it was the [role-playing] game alluded to it, then there was the movie quote and the armor. We assumed he could have survived,” Bliss said.

Kennedy, a fan of Fett, was also influential in bringing the bounty hunter back. Veitch told Snyder, “So we put Fett in the script. And LucasFilm never said no. The part about the Saarlac (sic) finding Fett ‘indigestible’ was a joke, sort of.”

It's unclear if Veitch was aware of the Marvel storyline, but either way, this is the first mention of Boba's more permanent escape. Escape count: 2

The Ordeal of Boba Fett

A short story was included in the 1993 Dark Empire Sourcebook in which Dengar comes across Boba Fett after his escape from the Sarlacc. Boba had already escaped, and Dengar takes him to Jabba's palace to recover for a month.

It's not clear which West End Game sourcebook is referred to in the above quote as having "alluded" to his escape (or if this was just fanon), but it could have been Galaxy Guide 5: Return of the Jedi (1990). Unfortunately, I don't have it and can't check.

Later, the details of his escape were given in full within the 1995 short story collection Tales from Jabba's Palace. In A Barve Like That: The Tale of Boba Fett, we learn that Boba had telepathic conversations with other Sarlacc victims, who told him not to bother escaping, but he escaped anyway by causing an explosion with his jetpack and some concussion grenades.

This account of his escape makes no mention of the Jawas of Doom storyline. At the time, older material like the Marvel comics was considered "S-canon", meaning that it was tentatively canon until contradicted by anything else. While I'm not aware of any sources that explicitly decanonized the Jawa escape, the intent of this story (and all later accounts) seems to be to establish this as Boba's one and only escape.

Tales of the Bounty Hunters

The 1996 short story collection Tales of the Bounty Hunters includes a story called Payback: The Tale of Dengar, which ends with Dengar finding Boba Fett near the wreckage of the sail barge, and after a brief standoff, deciding to help him.

Notably, many details differ in this version of events compared to the version in the Dark Empire Sourcebook, including whether or not Dengar recognizes Boba, whether or not he wants to help him, how long his recovery takes, and whether Dengar takes his ship or a skiff out into the Dune Sea (source: discussion on theforce.net).

The 1998 The Bounty Hunter Wars trilogy of novels later expanded on Boba's survival after getting out of the Sarlacc—he was found by Dengar and brought back to health.

In the 2006 edition of The Complete Visual Dictionary, a cross-section diagram of the Sarlacc gives a brief description of Boba's escape:

The only known survivor of the Sarlacc's actual digestive system was Boba Fett, whose armored suit offered some protection from the creature as he used his weapons to blast his way out. It took years for Fett to recover from his wounds and regain his reputation.

Since the post-Marvel accounts of his escape seem to be referring to the same event and don't substantially contradict each other, it seems like the answer is that he escaped twice in Legends: once via actual indigestion, and once via metaphorical indigestion (ie, explosions). Given the discrepancies between The Ordeal of Boba Fett and some of the later sources, some fans have suggested a third escape to make sense of these events, but imo the simplest explanation is just that the exact details around Dengar's encounter with Boba in the desert are fuzzy.

Boba escapes in Disney Canon as well. In the 2015 novel Aftermath, Cobb Vanth finds Boba's armor in the possession of some Jawas soon after the events of Return of the Jedi.

When the novel was originally published, it was only described as "Mandalorian armor", but was later confirmed to belong to Boba when these events were adapted and retold in The Mandalorian's Season Two.

In The Book of Boba Fett's first episode, Stranger in a Strange Land,

Boba's escape from the Sarlacc is shown. The episode opens with a flashback to Boba finding himself inside the sarlacc, and using his flamethrower to fight it off enough to crawl through its side and out of the sand. 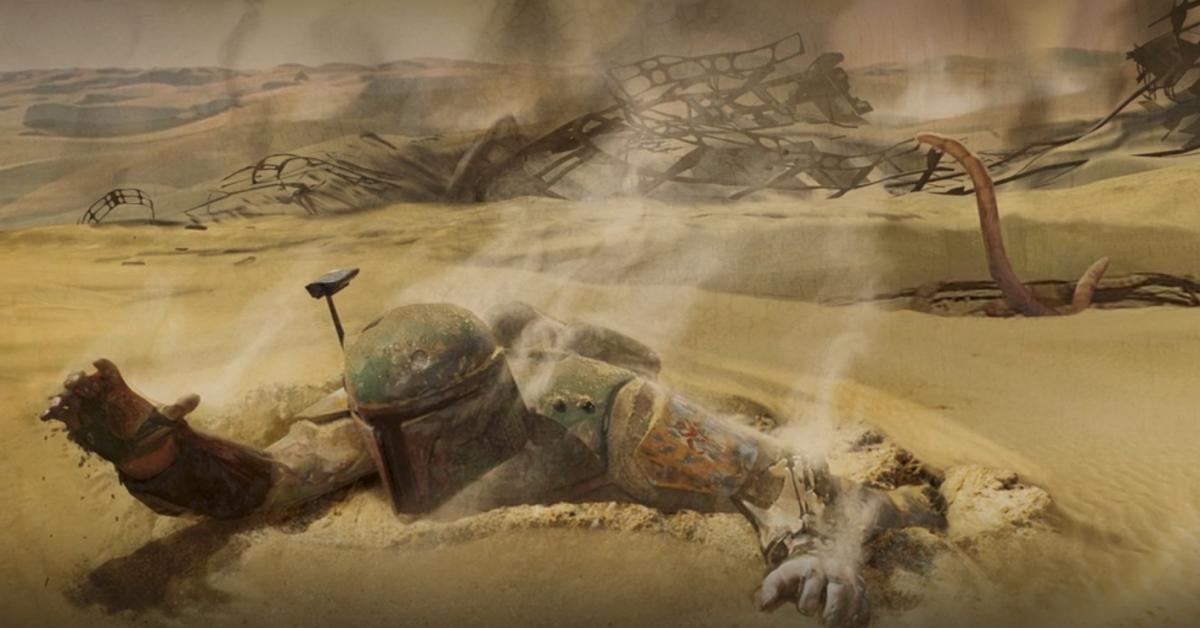 His armor is then stolen by Jawas, explaining how Cobb Vanth managed to get it from them later.

In the fourth episode, The Gathering Storm,

Boba returns to the Sarlacc with Slave I to try and retrieve his armor, which he doesn't realize was stolen by Jawas. While peering down into it, its beak and tentacles shoot out and try to drag the ship down into its maw. Ultimately, he and Fennec escape by dropping a seismic charge into its mouth, likely killing the Sarlacc for good.

This makes two escapes in Canon.

Totaling the accounts from Legends and Canon, that gets us four definite separate successful escapes (so far).

Not the answer you're looking for? Browse other questions tagged star-wars star-wars-legends return-of-the-jedi boba-fett or ask your own question.

15
Which book explains the story about how Boba Fett escapes his fate?
-3
What are the different Star Wars Canons?

2
How many times has Abeloth escaped?
15
Which book explains the story about how Boba Fett escapes his fate?
54
How did Boba Fett know to hide in the Star Destroyer "Avenger"'s garbage?
10
How many official "Republics" are there in the Star Wars universe?
11
How different is the Millennium Falcon in the official trailer vs. Episode VI?
9
How many (if any) survivors of the Yavin Death Star were there?
5
Is there any evidence to suggest that Aunt Beru and Uncle Owen were killed by Boba Fett and not the Storm Troopers?
3
How many times has the Wilhelm scream been used in Star Wars films?