What were the job parameters for the original Revenge of the Jedi poster?

The first posters released for Revenge of the Jedi are fairly famous, mostly for not matching the title of the final film. 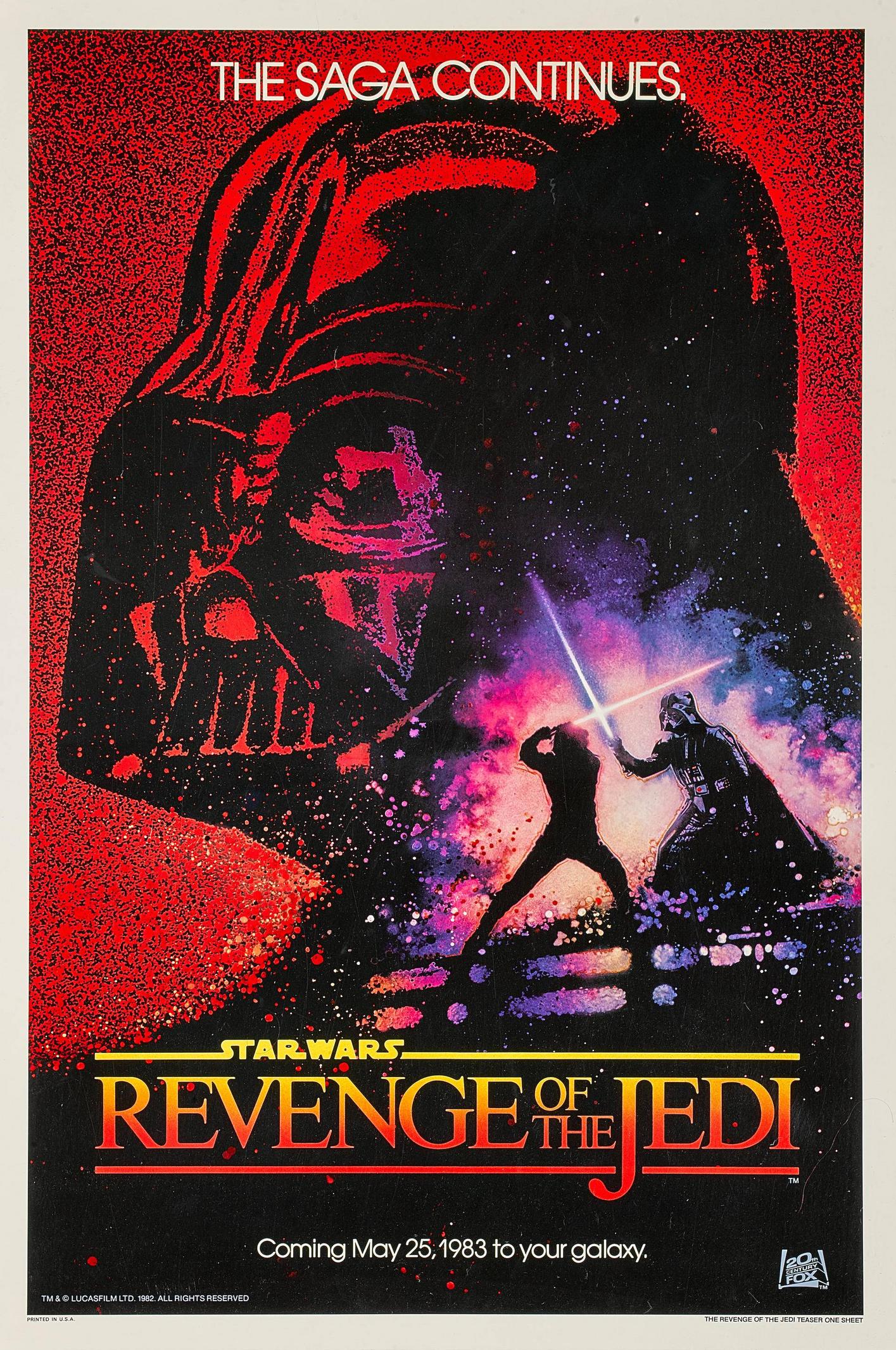 However, from the first time I saw it, what struck me was that, regardless of what the Star Wars, Episode VI was going to be called, what it showed on the poster was not from it. The fighting between Luke Skywalker and Darth Vader is very obviously adapted from their duel in The Empire Strikes Back. You can see the distinctive steps of the carbon freezing chamber under their feet, and Vader is wielding his lightsaber one handed, something that George Lucas was vocally unhappy about and which he made sure did not recur in Return of the Jedi. Indeed, here is the very frame from The Empire Strikes Back that shows Luke posed as on the poster, although Vader is positioned somewhat differently.

The poster was created by the graphic artist Drew Struzan, who later created posters for subsequent Star Wars as well as rereleases of the original trilogy. Struzan’s specialty appears to be making collages of images, where the individual elements are drawn based on photographs (or other preexisting images) and combined to make an evocative image. That is just what The Revenge of the Jedi poster shows: two drawings of Vader and one of Luke, all, given their precise detailing, clearly based on photographs or film stills.

But why was Struzan working from material from The Empire Strikes Back? Was it that no stills from Return of the Jedi were available to him? (And, if so, why? Was it a matter of secrecy? Principal photography for Return of the Jedi ran from January to May, 1982, so it seems like there ought to have been something they could have given the artist at the time he was hired.) And did he chose the Cloud City battle scene himself, or was he instructed to work from that? (Then by whom?) Finally, was there a reason he included the steps Luke is standing on (which were, for me, what made it most obvious where the original image came from)?

Struzan briefly mentioned his idea for the poster in an interview in Star Wars Galaxy Collector #1, from February 1998 (emphasis added):

The challenge for the Revenge of the Jedi teaser one-sheet, promoting the trilogy’s third installment before its final title was announced, was a bit more basic. “I wanted to do something a little different,” the artist recalls. “It was a simple idea, more scale than anything else: the head of Vader in a big background, with a little-bitty laser fight out in front. There wasn’t an established look to [Jedi's advertising] at that time; the styles were all over the place. So the poster stands out as a peculiar one.”

While this doesn't address whether photographic assets from Return of the Jedi were available while he was making the poster, he does say that there wasn't a particular style that he was required to use, and implies that he had a fair amount of creative freedom.

From what I can tell, Struzan almost certainly would have had assets from the film available, since a slideshow-style teaser trailer was released as early as May 1982, according to the Academy of Motion Picture Art and Science:

Struzan does mention later in the 1998 interview that he and Lucas prefer painted posters to photographic posters:

In recent years, a distressing trend has developed in American movie advertising, one that has sent many illustrators back to the drawing board as they reevaluate the changing marketplace. After a rich, 70-year history of painted posters, many producers are opting for a photographic approach to selling their films. “Photography is a direct reflection of reality,” says Struzan. “Art is interpretive, therefore it embodies more emotion and feeling. That’s why George Lucas usually goes with a painting for his work, because he wants to embody the feeling, or the soul, of the movie.”

Since his idea for the poster relied on silhouettes, it seems like he just liked the abstract idea he'd come up with, and felt that the Empire elements worked perfectly well for it.

Side note: according to Drew Struzan on Twitter, the documentary about him, Drew: The Man Behind the Poster, addresses the question of why the lightsaber colors in the Revenge poster are reversed. I haven't seen the documentary, but it may have more answers about his thought process for the poster.

Not the answer you're looking for? Browse other questions tagged star-wars behind-the-scenes the-empire-strikes-back poster-design or ask your own question.

29
Why didn't Vader see Luke as a threat?
15
What does Yoda mean by “Remember your failure at the cave!”
20
In Star Wars: "The Force Awakens," how could this lightsaber have turned up where it did?
45
Who/what exactly does Darth Vader believe taught Luke between the events of “The Empire Strikes Back” and “Return of the Jedi?”
50
Why is Vader suddenly a terrible fighter in Return of the Jedi?
16
Why did Darth Vader reveal to Luke that he is his father?
70
Was Luke in “Return of the Jedi” really “better” than Obi Wan in “Revenge of the Sith?”
4
What Star Wars footage shot for one film was reused in a later film?
15
Did Luke lose his X-Wing on Cloud City?