I read this manga a few years ago.

It's set in the modern day and it's about a high school student who meets a girl with a sword and wears bunny ears who claims to be his fiance. She says that he is a prince of a country of magic and he is a candidate for the throne and that she is here to protect him from his siblings, and is then attacked by a girl who can control plants and she is cursed to not be able to sleep. Then, he unlocks the power of the royal family that can nullify all magic through this metal golem ghost thing that floats behind him like a stand from JoJo.

Also, it turns out some of the characters are based off of fairy tale characters like the thorn girl is sleeping beauty and the next antagonist I remember was Snow White who has magic that can control up to 7 things using her "dwarves".

I believe the title has to do with the word "rabbit" or "bunny" so I tried "kaguya inaba usagi" and such things like that.

Could this be Maken-Ki! (AKA. Competitive Spirit!)?

Ooyama Takeru, a young normal yet perverted minded guy, got accepted and now goes to a school that, unknown to him, was where combat and magic is used. On the first day, he meets again after three years: Amaya Haruko, his childhood friend, Kushiya Inaho, a girl who says she's his fiance, and Himegami Kodama, a blonde who wants to kill him. 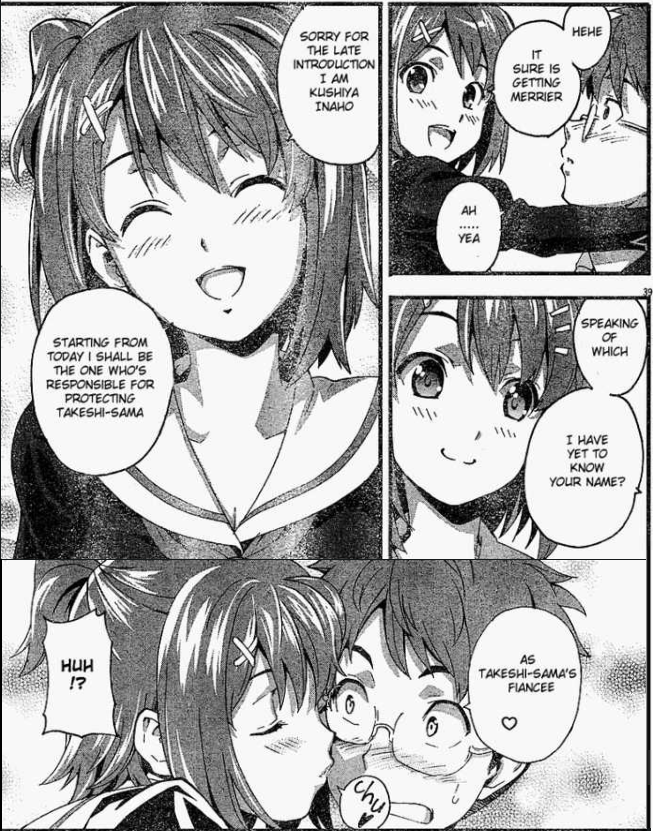 11
Looking for a TV show about young people at a boarding school?
5
Looking for a manga about a high school student who wants to take over the world
4
Manga about siblings moving to the countryside and a selfish God
32
Manga about a female worker who got dragged into another world together with this high school girl and she was just told she's not needed anymore
6
Fantasy manga about a girl who travels back in time to old Japan
3
Manga where a group of high school students are transported to another world
3
Anime about a club of high school girls that fight monsters
2
Manga where the protagonist gets letters of recommendation from powerful figures, and changes his age, to go to a school
5
An older time traveling manga about a girl who becomes a warrior after she travels back in time?