How did Rhodey survive?

Colonel James "Rhodey" Rhodes was present during Stark's kidnapping in Marvel Studios' Iron Man (2008) - in fact, he was in the Humvee behind him (dubbed the "Hum-drumvee" by Stark just minutes before the attack). However, it seems all members present were killed during the attack. Rhodes later comes back to save Tony (indirectly) and says:

How was the "Fun-vee"? Next time, you ride with me.

How did Rhodes survive the attack? Is there a canon MCU answer, or something in the comics?

Rhodey wasn't in the Humvee behind Stark's, at least not at the point that it was attacked.

There appear to be four Humvees in immediate view as well as a Jeep. Humvee #1 is totally destroyed in the initial explosion. Stark is in Humvee #2 (of which all of the occupants apart from himself are killed or seriously injured). Humvee #3, which you assumed contains Rhodey, despite there being no actual evidence of this, is attacked, but at the point that it's assaulted and the crew die, there are only three soldiers present on screen, none of whom are dressed like Rhodey. Humvee #4 appears untouched in the background. 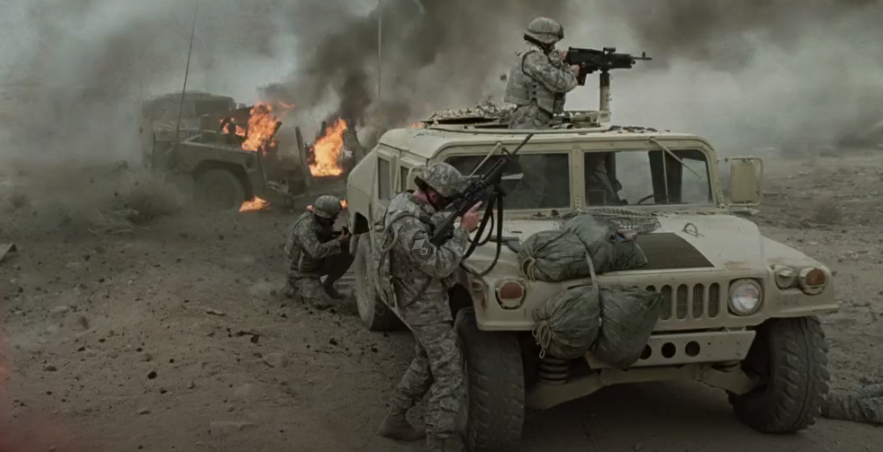 Possibly he was in the last Humvee or, like in the original screenplay, he had disembarked and was off chasing after baddies.

TONY’S POV - OF JIMMY: as he’s stitched by a bouncing Betty mine. Now, running past, firing a .50 cal. machine gun is --

[An EXPLOSION cuts him off. Rhodey fires through the chaos, covering all directions, then advances into the murk.]

Note that the official junior novelisation we learn that the Ten Rings terrorists only hung around long enough to snatch Tony and leave. There was no effort made to mop up survivors.

“It looks like a standard hit-and-run to me,” the general replied.

58
Why did Tony Stark build arc reactors into his extra Iron Man suits?
59
How does Stark Enterprises maintain its cashflow?
4
How could Rhodey fit into the Mark II armor?
7
How did the villain expect this part of his plot to work?
22
Why didn't Stark sue the government for stealing his armour in Iron Man 2
5
Did Rhodey get in trouble for the Stark Expo attack?
5
How did Daisy survive this?
19
What does the name "Black Widow" mean in the MCU?
4
Is Iron Man: Armored Adventures a purely stand alone series, or does this version of Tony exist in some other universe outside of 616?
8
What was the extent of Howard Stark's involvement in the Manhattan Project?