Has Jango Fett's backstory been changed?

spoilers for season 2 of The Mandalorian

Okay, the question itself was a bit hard to phrase, but I'll try my best.

In Attack of the Clones, we first see Jango Fett using the same Mandalorian armor that Boba has in the original trilogy, showing that it was passed down from father to son. But when we meet the Mandalorians in The Clone Wars, they report that Jango is not one of them and obtained Mandalorian armor in some unknown way. This tracks, as Jango is a bounty hunter and has always worked on his own.

But, in season 2 of The Mandalorian, Boba Fett tells Din that Jango was a foundling and fought in the Mandalorian Civil Wars. If this is the case, why did Mandalore claim no connection to Jango in The Clone Wars? Is this just a total retcon of that line, or can both of the claims be true?

Having re-read the transcript of the episode, I note that Prime Minister Almec never actually denies that Jango Fett is a Mandalorian, foundling or otherwise, nor does he deny that Jango fought in the Mandalorian Civil War. His exact words are:

Jango Fett is a common bounty hunter. How he acquired that armour is beyond me.

As for why Almec would do this, Silly but True pointed in the comments that, as Prime Minister, he has a vested interest in upholding Mandalore's peaceful image and disavowing anyone that contradicts it. It's a subtle "no true Scotsman" fallacy - no true Mandalorian would be as violent as Jango Fett is, therefore Jango Fett cannot be Mandalorian.

As far as I can tell, The Mandalorian confirming Jango's Mandalorian heritage doesn't actually contradict anything Almec said.

F1Krazy's answer is pretty much correct, but there is one additional piece of information that I think supports this.

As you mention in your question and in the Mandalorian episode you reference, it was said Jango was a "Foundling", similar to Din Djarin. From what we know of Din's backstory, he was orphaned during a Separatist attack and saved by a group of Mandalorians. He was adopted and eventually joined their ranks.

Given this, I think we can assume Jango is not from the planet Mandalore nor was he Mandalorian by birth (i.e. born of Mandalorian parents) and was orphaned and adopted into a Mandalorian clan, and raised as one.

So if you take "Mandalorian" as being from the planet Mandalore or born of parents who were Mandalorian, it is very likely Almec did not consider Jango Fett a true Mandalorian.

As F1Krazy's answer states, the two plot points can be rectified in-universe. However, from a behind the scenes perspective, his backstory was changed. The notes of 2019's Star Wars: Age of Republic - Jango Fett states that at that time, Jango not being a Mandalorian was the position of both George Lucas and Lucasfilm. 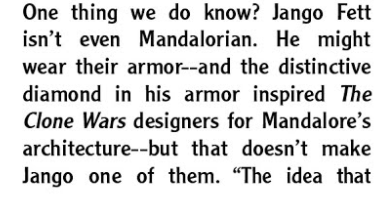 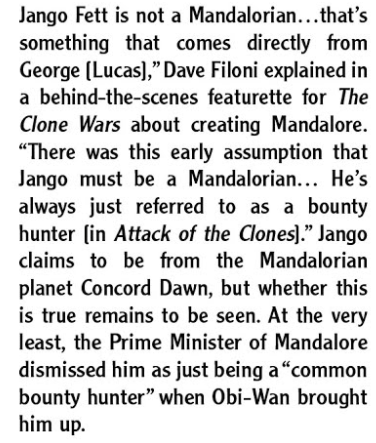 While this statement does touch upon the same reasoning used by F1Krazy, it's still pretty unambiguous. Star Wars: Age of Rebellion - Boba Fett repeats the same sentiment. 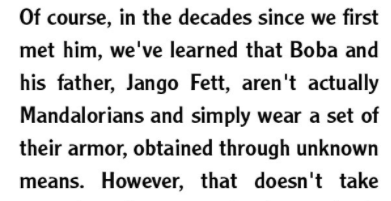 Not the answer you're looking for? Browse other questions tagged star-wars attack-of-the-clones the-mandalorian or ask your own question.

74
Out of Universe, was Vader always planned to be Luke's father?
10
Did Boba Fett's armour use durasteel or beskar?

7
As per the latest canon, is Jango Fett still Jaster Mereel's protégé /adopted son?
30
Why/How is Boba Fett considered a Mandalorian?
5
What is Jango Fett's relation to the Death Watch in Disney Canon?
11
How was Jango Fett chosen?
2
How did Jango Fett get permission to reside near the army of clones?
10
Did Boba Fett's armour use durasteel or beskar?
8
Before The Mandalorian, what was the origin of Boba Fett's armor?
11
What is a chain code and how do they work?