I just "manually" awarded the bounty to Clara Diaz Sanchez's answer which is the closest to my memories. But there are obviously a lot of stories, movies, April Fool's jokes, etc., etc., with the same idea. So I keep the hope that sometime, someone will come with the answer I am really looking for, a written story about a very, very old implement, millennia (rather than just centuries) old. So please do not close this question, I deliberately waited for the end of the "normal" bounty to give the points to an answer without accepting it. But I am not going to invest 600 more rep points... 450 is already a lot ;)

I read this one long ago, probably more than 20 years. I’m not sure whether it was a short story or one component of a novelette or a novella. I don’t think it was an element of a whole novel, but I am not sure.

The idea is that when a potter works at his wheel, the sounds produced all around (in particular his words if he speaks, or the words said by people next to him) make his fingers vibrate, and these vibrations are imprinted into the clay. Once baked, the clay would keep the imprints of these vibrations over the centuries.

This being exactly the principle of the cylinder phonographs (I will not enter into the controversy about Edison being or not the first one to reproduce this process millennia after the Babylonian potter), researchers in our era (or maybe a future era ?) were able to extract this information from pots of the babylonian era. So for the first time was it possible to hear the sumerian language.

I don’t remember whether that was the entire plot of the story or just one element among many.

This could be "Time Shards" by Gregory Benford, originally published in 1979, and since then reprinted in a number of anthologies. As you recall, a researcher finds that sounds are recorded as vibrations in pottery as it is being shaped on a wheel, and found that they could be played back later:

The basic idea was quite old, of course. In the 1960s a scientist at the American Museum of Natural History in New York had applied a stylus to a rotating urn and played the signal through an audio pickup. Out came the wreeee sound of the original potter’s wheel where the urn was made. It had been a Roman urn, made in the era when hand-turned wheels were the best available.

He finds various scraps of conversations and the ambient noises in a potter's workshop - the thumping of the kicked potters-wheel, the best ways to keep sheep, advice on making pottery - and one conversation about converting to Christianity. This conversation was not from a Babylonian pot though, but one made in England in about 1290. The full story is available for free here.

Were you in the habit of browsing the New Scientist? David Jones had a weekly column there in which he introduced various plausible and implausible inventions invariably wrapped in a story told to him by "my old friend Daedalus". One of these introduced the [im]plausible science of Archaeoacoustics, and was taken more seriously than most. Wikipedia notes:

[...Archaeoacoustics] was first raised in the 6 February 1969 issue of New Scientist magazine, where it was discussed in David E. H. Jones's light-hearted "Daedalus" column. He wrote:

[A] trowel, like any flat plate, must vibrate in response to sound: thus, drawn over the wet surface by the singing plasterer, it must emboss a gramophone-type recording of his song in the plaster. Once the surface is dry, it may be played back.

Jones subsequently received a letter from one Richard G. Woodbridge III who claimed to have already been working on the idea and said that he had sent a paper on the subject to the journal Nature. The paper never appeared in Nature, but the August 1969 edition of the journal Proceedings of the IEEE printed a letter from Woodbridge entitled "Acoustic Recordings from Antiquity". In this communication, the author stated that he wished to call attention to the potential of what he called "Acoustic Archaeology" and to record some early experiments in the field. He then described his experiments with making clay pots and oil paintings from which sound could then be replayed, using a conventional record player cartridge connected directly to a set of headphones. He claimed to have extracted the hum of the potter's wheel from the grooves of a pot, and the word "blue" from an analysis of patch of blue color in a painting.

[I'm taking the liberty of including the text published in "The Inventions of Daedalus", just in case it jogs Alfred's memory - Clara DS] 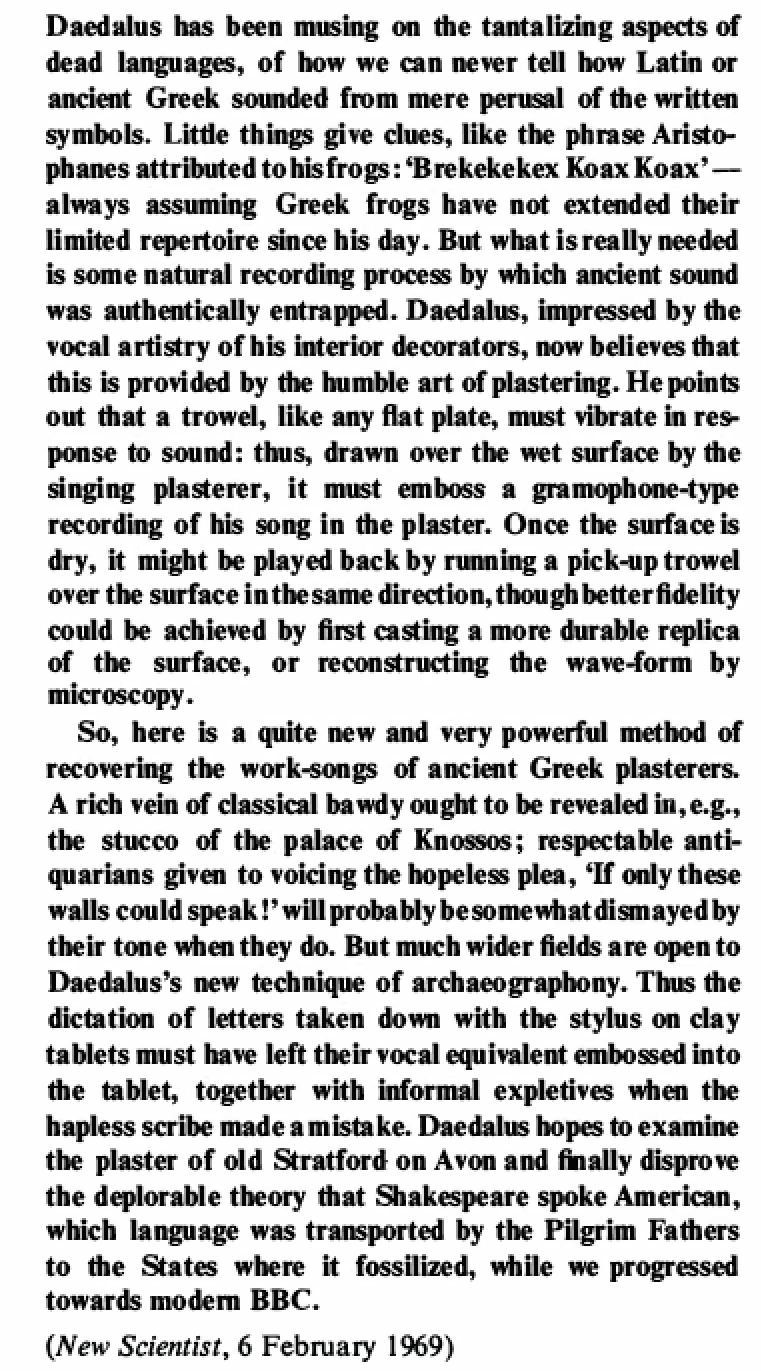 Daedalus has been musing on the tantalizing aspects of dead languages, of how we can never tell how Latin or ancient Greek sounded from mere perusal of the written symbols. Little things give clues, like the phrase Aristophanes attributed to his frogs: ‘Brekekekex Koax Koax’ – always assuming Greek forgs have not extended their limited repertoire since his day. But what is really needed is some natural recording process by which ancient sound was authentically entrapped. Daedalus, impressed by the vocal artistry of his interior decorators, now believes that this is provided by the humble art of plastering. He points out that a trovel, like any flat plate, must vibrate in response to sound: thus, drawn over the wet surface by the singing plasterer, it must emboss a gramophone-type recording of his song in the plaster. Once the surface is dry, it might be played back by running a pick-up trowel over the surface in the same direction, though better fidelity could be achieved by first casting a more durable replica of the surface, or reconstructing the wave-form by microscopy.

So,here is a quite new and very powerful method of recovering the work-songs of ancient Greek plasterers. A rich vein of classical bawdy ought to be revealed in, e.g., the stucco of the palace of Knossos; respectable antiquarians given to voicing the hopeless plea, ‘If only these walls could speak!’ will probably be somewhat dismayed by their tone when they do. But much wider fields are open to Daedalus's new technique of archaeographony. Thus the dictation of letters taken down with the stylus on clay tablets must have left their vocal equivalent embossed into the tablet, together with informal expletives when the hapless scribe made a mistake. Daedalus hopes to examine the plaster of old Stratford on Avon and finally disprove the deplorable theory that Shakespeare spoke American, which language was transported by the Pilgrim Fathers to the States where it was fossilized, while we progressed towards modern BBC.

Rudy Rucker's "Buzz" perhaps? It's available for free on the author's website. It was originally published in 1983 in Rucker's collection "The 57th Franz Kafka".

It has a brief passage about audio recorded into pottery by an Egyptian, not Babylonian, craftsman:

Soft wah-wah-wah and the phono needle changes its appearance. We zoom slowly back…vase still spinning. But only half of the vase is etched yet, and the needle has turned into the tip of a diamond knife, held in the hand of a tan-brown man with ultra-black hair, an Egyptian craftsman etching the original groove into the vase. He is talking, and as he talks the vibrations travel down his arms and into the etching tool he holds…he’s recording his voice though he doesn’t know it.

Here in the flashback we see it all, the pedal-driven lathe, the blazing square of sun lying on the floor like sheet-iron, the play of muscles in the turner’s back, his big liquid eyes and purple lips. He speaks again.

It was an unaccepted answer to this old, somewhat similar question.

The audio recording is not the primary thrust of the story however, as DavidW pointed out in the comments of the aforementioned answer:

"Buzz" is about a kind of self-replicating alien waveform that, when played back, takes over the world.

Here is another reference that touches on or subsumes some of the other (rejected) answers. It is one section from a long essay by Arthur C Clarke "Technology and the Limits of Knowledge". I quote salient bits from the version included in "The View from Serendip", which was assembled from lectures given in 1972-73 at the Smithsonian Institution and originally published in "The Frontiers of Knowledge" (New York, Doubleday, 1975). These sections are from 3 pages of a 25 page essay.

A favourite science-fiction idea - though I have not seen it around recently - is the machine that can recapture images or sounds from the past. Many will consider that this is not science fiction, but fantasy. They may be right, but let us indulge in a little daydreaming.

There used to be a common superstition to the effect that no sound dies completely, and that a sufficiently sensitive amplifier could recapture any words ever spoken by any man who has ever live. How nice to be able to hear the Gettysburg Address, Will Shakespeare at the Globe, the Sermon on the Mount, the last words of Socrates. But the naïve approach of brute-forve amplification is, of course, nonsense; all that you would get is raw noise. [...] Nevertheless, there is a slight hope of recapturing sounds from the past - when they have been accidentally frozen by some natural or artificial process. This was pointed out a few years ago by Dr. Richard Woodbridge [... several paragraphs describing the same material as my previous answer ...] It is said that Leonardo employed a small orchestra to alleviate Mona LIsa's boredom during the prolonged sittings. Well, we may be able to check this - if the authorities at the Louvre will allow someone to prowl over the canvas with a crystal pickup. [...]

There must be better ways of recapturing sound, but I can't imagine what they are. Still less can I imagine any way of performing a much more difficult feat - recapturing images from the past. I would not say it is impossible in principle; every time we use a telescope, we are, of course, looking backwards in time. But the detailed reconstructions of ancient images - palaeoholography? - must depend upon technologies which have not yet been discovered, and it is probably futile to speculate about them at this stage of our ignorance. [...] All the energy collected by our giant radio-telescopes during the three decades that have revolutionised astronomy is "little more than that released by the impact of a few snowflakes on the ground".

It is possible that Clarke also included some of this "daydreaming" in one of his pieces of fiction also, but I cannot recall where that would be.

There is a throwaway plot in a somewhat smutty 1994 movie called 'Sensation' that matches that pretty much exactly. I'm embarrassed to know this, but middle school boy that I was, I snuck watching this on late-night cable.

Here's a link to that part of the movie, which I found leaning in a dark corner of youtube. youtu.be/gxneLI3089E?t=496

20
Short story where the Apocalypse gets overshadowed by the First World War
6
Looking for a short story, probably late '70's early 80's science fiction re driving banned car
7
Short story (probably) where characters played a Civilization-like game, I think on Titan
9
What’s the earliest work of science fiction to start out of order?