Fantasy book with a young male transported to another world; giants and strange sexual themes?

This is going to be a tough one. I read this book as a preteen and I distinctly remember it being uncomfortable and inappropriate for my reading age.

It was a fantasy book involving a young male protagonist who is transported to another world (possibly through a portal on a beach). In this world, he encounters a female spirit that becomes sexually involved with him / forces him to fall asleep. When he wakes up the next day, the young man is now a fully grown, strong adult. Other details that I remember include "giants" of some kind as the villains of the book, with reference to women getting ripped apart by having to have sex with the giants and/or give birth to giant children. Also, there was a scene where the protagonist eats the flesh of a female demon to bring her under his control, and a scene where the protagonist is aroused by a statue and jumps into a pool of water to hide it.

I believe the book was written by a male author and had an orange cover. I think it may have been the first in a series.

I thought the description sounded familiar, but after a little searching, I am actually going to suggest a book that I have not personally read. This seems to match with some descriptions of The Knight (2004) by Gene Wolfe, the first of two books in The Wizard Knight series. Although I have not read either of the two books, the adolescent sexuality angle sounds very characteristic of Wolfe.

I found the suggestion by searching for: fantasy novel with human-giant sex. This led me to this LibraryThing discussion and then to a description of the book:

In The Wizard Knight by Gene Wolfe there are two instances: in the first instance young Ables night with a faire queen is tastefully alluded to and left to the reader to fill in the rest, while in the latter there is a graphic description of what happens when a giant rapes a human woman — and the resulting pregnancy.

THE WIZARD KNIGHT springs from the myths, legends and literature of times past. A teenager passes from Earth to a magical realm of seven worlds, where he is given a hero's adult body and named Able. Though forced to act as a man, inside he is still a boy, even as he sets off to find his destined sword and become a knight. In his quest he battles giants, meets gods, heroes and a sorceress (who repeatedly tries to seduce him), and serves the mercurial dragon king Arnthor in a was [sic.] that could end everything.

The two books (The Knight and The Wizard) have been released both singly and together. These seem to be the most common covers. 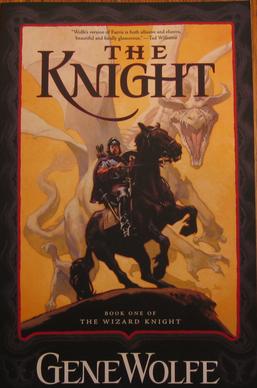 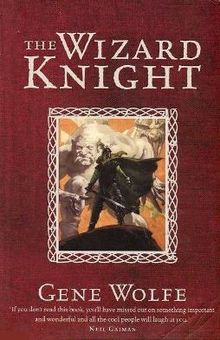 33
Book or series with 7 layers of worlds, where each layer's inhabitants are like gods to the layer below

10
I’m looking for a fantasy book with a female protagonist with red hair, who climbs a sacred rock and sparks civil unrest
10
Book where a boy and girl are transported into a fantasy video game
8
Trying to identify a book about male teen with psychic powers, published before 1995
6
Looking for a fantasy book with young male protagonist protecting magic seed
8
Book series with people transported through time by magic
5
Male and female protagonists explore giant building with seated statue. Smoke spells out cryptic messages
6
Trying to remember an old cartoon with triangular spaceships
5
YA/teen book with male main character meeting his future self who wants to fix history
10
This book about space/interstellar travel, permafrost, biological androids and mind meld technology, identify
8
Fantasy Book With Four Protagonists And Bandoliers