Does "My" in My Little Pony refer specifically to anyone?

Had to do some searching to actually try and have a noteworthy answer to this one - especially since I only really care about G4 and onward... I will break this into multiple points.

From a franchise / toyline point of view

The birth of the toy line tracks back to 1981 when Hasbro released the "My Pretty Pony" toys, which would later become "My Little Pony" around 1982-1983. The idea for the toy line is usually attributed to Bonnie Zacherle who in multiple occasions stated that the idea for a toy pony came from the fact that when she was a little girl she wanted a pony.

Therefore, in that sense the "My" in the name can be seen as referred to Bonnie and any other little kid who wanted a pony like her. After all, isn't the recent apps-for-kids franchise called "My Talking Tom" called that way for the same reason? It is your personal Tom, the one you bought - it works to create some bond between the kid and the product. The original ads from 1981 (referenced in a comment, thanks to Valorum for the reference) seems to enforce that idea.

From a show-canon point of view

The first series of the My Little Pony cartoon - commonly referred as G1, was made in the year 1986 from a collaboration between Marvel and Toei (yep, the ones behind things like Spider-Man and Mazinger Z..). It included a human character called Megan. 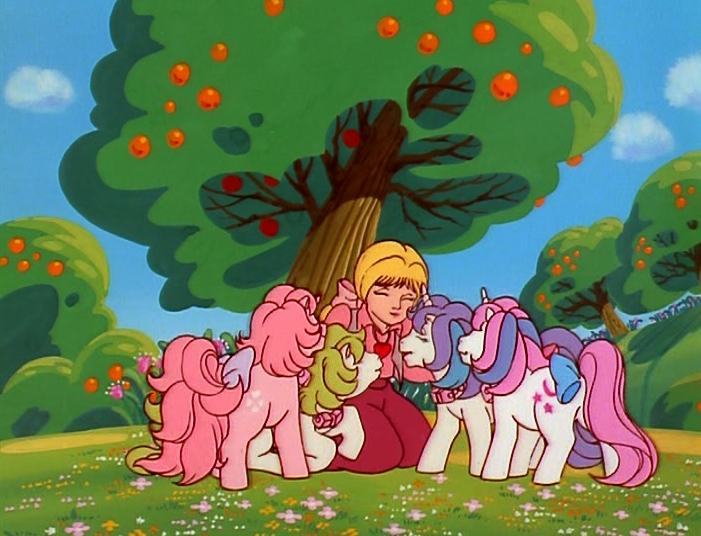 In the two show seasons she appeared in, she was depicted as a sort of leader/protector for the ponies. You could say that in a way they were their ponies, making her and her younger brother and sister the ones the "My" was aimed to. But it would be a big stretch probably.

Later incarnations of the show didn't mix human characters and ponies (even Equestria Girls is more of a spin off where humans replace the ponies as alternate versions) so the only other stretch you can do is probably related to G4.

Both the MLP:Friendship is Magic opening theme and the unused Equestria Girls credit song have lyrics that point to them being sung by Twilight Sparkle.

When I was young I was too busy to make any friends
Such silliness did not seem worth the effort it expends
But my little ponies, you opened up my eyes
And now the truth is crystal clear, as splendid summer skies
And it's such a wonderful surprise
MLP:FiM theme, extended version- official Hasbro channel

Therefore, canonically to the song, in G4 case it is indeed Twilight who his calling her friends "My Little Pony". Again, this feels like a stretch but it is the only possible claim.

To summarize, the name is probably just a way to have the children - the customers for the toys - feel like that pony is their pony. But if you have to find a canon answer, then Megan and Twily are probably your best bets.

ADDENDUM: b_jonas pointed out to me that in S1 E18 of the MLP:FiM show, Twilight does indeed say the line "My little ponies" to someone - specifically the Cutie Mark Crusader (who, to be fair, are far younger than her, so the "little" is well deserved in this case)

Twilight Sparkle: My little ponies! You're missing the point. Think about the things you already enjoy doing. Think about what you're already good at.