I remember watching this TV series long ago on Indian television where a widow or divorced woman moved with her kids into a haunted house with an angry ghost who was not welcoming at the start.

Plot: This single mother moves with her kids (I guess two kids; one male, one female) to a new house. Probably the father is dead or she is divorced. The ghost is a grumpy male who was in some job like Navy or Army or something similar when he was alive. He loves his house and scares away occupants but with this family, he gets attached.

A lot of shenanigans happen and the villain of the week type format follows. Villains were sometimes humans and sometimes supernatural.

Specific episode: A weird looking guy uses makeup to make his lips look bigger and threatens humanity with a continued solar eclipse unless they fulfill his wishes.

Not sure if this one is inspired by The Ghost and Mrs. Muir or not but I got my answer by digging more.

Here is the main lead: 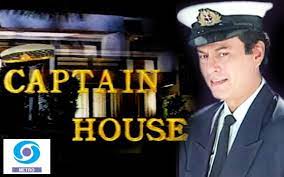 Not the answer you're looking for? Browse other questions tagged story-identification tv horror or ask your own question.

9
TV series about a man living in a mansion with a ghost
4
What UK 80s TV kids show had a ghost in a hat and coat looking for treasure?
7
Seeking a kids' mystery series with four ghost and two living teen investigators
2
90s cartoon series with kids inside robots fighting
4
Live action series or movie with kids sucked into a video game
7
TV show with high school kids and monsters
3
Besides Strikeforce:Morituri, what was the second property Marvel was developing with Scifi Channel in 2002 as TV series?
11
A novel with a dream world and possibly time travel