When is the "Superman/Doomsday: Hunter/Prey" mini-series set, in relation to the mainline Superman books?

In April-through-June of 1994, DC Comics published the three-part Superman/Doomsday: Hunter/Prey mini-series, featuring the first rematch between the titular characters, since their initial conflict in the landmark "Death of Superman" storyline.

At the time, all the mainline Superman books had a small triangle on the cover with a one or two-digit number inside it, indicating the chronological reading order of the books being published that year. The Superman/Doomsday: Hunter/Prey mini-series didn't have these numbers on the covers though, making it initially unclear as to quite when the story was set, in relation to the wider Superman continuity. There were also no helpful captions or statements in the mini-series to clarify matters.

For some time, I was under the impression that the story took place after Adventures of Superman Vol. 1 #512 (May, 1994), based on the following statement made in the letters column for Superman Vol. 2 #0 (October, 1994).

We've all grown very accustomed to the ol' triangle numbers telling us exactly where things fit in, Joe and Dan. Thanks for doing some legwork of your own. In fact, SUPERMAN/DOOMSDAY did take place after Superman lost most of his excess power...but it is possible that he was simply de-powered to the level he was at just before his abilities went out of control...y'know, back when he was able to travel in space (circa SUPERMAN #86). That seemed like a good power level to us...and apparently to you superfans, too. Now back to letters for SUPERMAN #90. 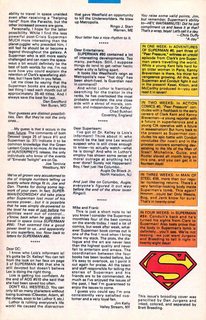 For context, Adventures of Superman Vol. 1 #512 was the issue where the Parasite drained away the excess power which had been building up in Superman's body since he was exposed to 'Kryptonite-X' radiation in Superman Vol. 2 #82 (October, 1993), the concluding chapter of the "Reign of the Supermen" storyline. (The Kryptonite-X radiation caused his body to absorb the solar energy that fuels his powers at a faster rate than usual, which led to his powers gradually increasing until he could no longer control them.)

However, I later stumbled upon a story in Superman: The Man of Tomorrow #9 (September, 1997), where Jonathan Kent indicated that the events of Superman/Doomsday: Hunter/Prey took place before the Parasite drained off Superman's excess power. 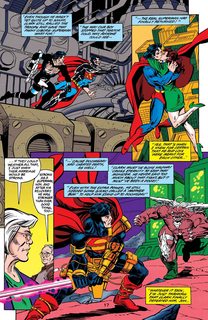 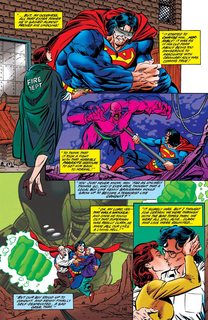 In Action Comics 696, Doomsday appears trapped in space as Superman begins his journey back to Earth. So the story is after his return that occurs in Man of Steel 31. The triangle issue immediately after is Superman 87, which is the beginning of the Bizarro World arc, this arc continues uninterrupted through the issues where he suffers the accumulation of power, through Battle of Metropolis to Action Comics 700, when Metropolis is destroyed.

In Superman Doomsday Wars, it is said by Brainiac that Hunter/Prey took place before Zero Hour, so it could not have happened after the rebuilding of Metropolis, however, in the story Metropolis was intact. So the story must have taken place between Man of Steel 31 and Superman 87.

Not the answer you're looking for? Browse other questions tagged dc comics superman continuity or ask your own question.

8
Did the World Engine from ‘Man of Steel’ appear in Superman comic books?
3
What did Adventures of Superman use from the comics and what was later added from the series?
5
When did Batman’s creators last contribute to the comic series?
4
Are the different Superman comic series linked?
6
When did Lex Luthor save the world from Superman?
10
In Batman vs Superman why didn't Superman just have Wonder Woman stab Doomsday with the kryptonite?
0
Superman comic which had a drawing style of the Animated Series
1
In the DCAU continuity, when did Superman go rogue?