Cultivation manga where the main character is killed by poison before his marriage and reincarnates in another world, where he gets a healing item

I'm trying to find a manga where the main character dies due to poison, and is reincarnated in another world, where he gets a healing item.

The main character is killed and reincarnates into the same poisoned body. He is killed before his marriage, and his wife is a cold beauty in the first chapter.

The main character trains both physically and in cultivation, and also has a sword tattoo on his hand, which belongs to a demon family. He heard it from his grandfather, who was sealed.

The main character is reincarnated twice. After he is reincarnated the second time, he gets a master as a girl in spirit form. She then passes her techniques onto him, and mentions while he is training that his brother also learned this skill, but he failed.

The MC's parents swap him with their friend's child, and he meets his parents later. He also has a crush on his cousin or sister at the beginning of the manga, but later realizes they aren't blood relatives, and they marry. Also, this is a harem manga.

Might this be Against the Gods (Nitian Xie Shen)...?

His meridians were destroyed. He was abandoned by his clan, mocked by the world as useless trash, and was murdered on the night of his wedding... but thanks to the Mirror of Samsara, his destiny was reversed and he was reborn into the world, filled with both hatred and regret. He swore that this time, he would reach the pinnacle of power!

However, another member of the Xiao clan, Xiao Yu Long, is jealous of Che, and wants him out of the way so he can marry Qing Yue himself. On Che's wedding day, Yu Long poisons a bowl of soup, and tells Che's 15-year-old aunty, Xiao Leng Xi, to take it to him. She innocently brings the poisoned soup to Che, who drinks some of it, and then passes out on his bed right in front of her.

Che then reincarnates as a baby in the Azure Cloud Continent, where he's found alone in a forest by a healer saint, who names him 'Yun Che', and raises him as his disciple. Years later, Che -- now 24 years old -- is cornered on a cliff edge by a group of enemies, and decides to swallow a 'heavenly poison bead' and leap to his death. He's then reincarnated back into his previous body in the Profound Sky Continent, around the same time that he died from the poison. 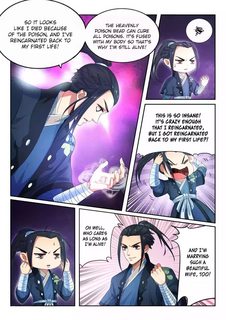 His aunty, Leng Xi, is still there beside his bed, and relieved to see he's alright. Che remembers that he's due to marry Qing Yue later that day, but also remembers the life he lived in the Azure Cloud Continent, including the healing skills he learned from his master. In addition, he now has a circular mark on the palm of his left hand, which he believes is the result of the heavenly poison bead fusing with that hand.

In chapter 4, Che and Qing Yue get married, but she subsequently informs him that as an ice cultivator, she must have a cold heart, and isn't allowed to fall in love with anyone, not even her husband. As such, she keeps him at arm's length, both physically and emotionally, and Che regards their marriage as one that exists in name only.

In chapter 7, Che finds a mysterious red-haired girl lying unconscious in the garden of Xiao Manor. When he prods her cheek with his left hand to wake her up, that hand becomes engulfed in green energy, which he exclaims is a horrifying poison. However, the heavenly poison bead from his other life, which is fused within his left hand now, cleanses the poison from his body. The girl then suddenly grabs his hand, bites one of his fingers, drawing blood, and vanishes. He concludes that she went into the bead in his hand.

In chapter 8, Che tells Leng Xi that he would've married her, if they weren't related, and she appears to share his feelings.

In chapter 20, Che's grandfather, Lie, reveals that Che isn't related to the Xiao clan by blood, but was adopted by his son, Xiao Ying. In chapter 27, Lie expands on this, explaining that Ying adopted Che from Che's biological father, Yun, to repay him for saving his life. The art makes it appear as if Ying and Yun may actually have exchanged babies. 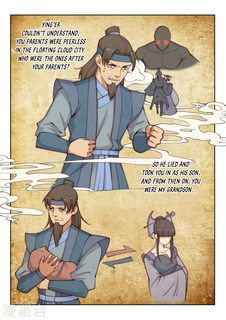 In chapter 31, Che is about to be killed by a member of the Xiao clan, Xiao Ba, when the mysterious red-haired girl re-emerges from the bead in his hand, and saves him, easily slicing Ba's body apart like salami. The girl informs Che that she's a princess, and that her name is Mo Li. Another member of the Xiao clan, Xiao Jiu, turns up looking for a fight, and Mo Li easily tears him apart with a magical projectile attack.

In chapter 36, Mo Li forces Che to kneel in front of her, and tells him that she'll now officially take him as her disciple. She's clearly much more powerful than he is, so he's not really in a position to refuse. She also infuses him with a drop of blood from an evil god, which regrows his broken meridians and powers him up.

Not the answer you're looking for? Browse other questions tagged story-identification manga martial-arts cultivation or ask your own question.