Recall in Star Wars: Empire’s End issue 1, the Emperor blows a gasket when the initial firing of the Galaxy Gun does not go as planned. This in turn reveals his fraught deteriorating condition of his final clone body.

This causes the Emperor an immediate emergency to quickly get some spare bodies.

He then goes to Ossus to harvest some Force-sensitive Ysanna to serve as immediate replacement bodies.

His Dark Jedi slab them up in carbonite… 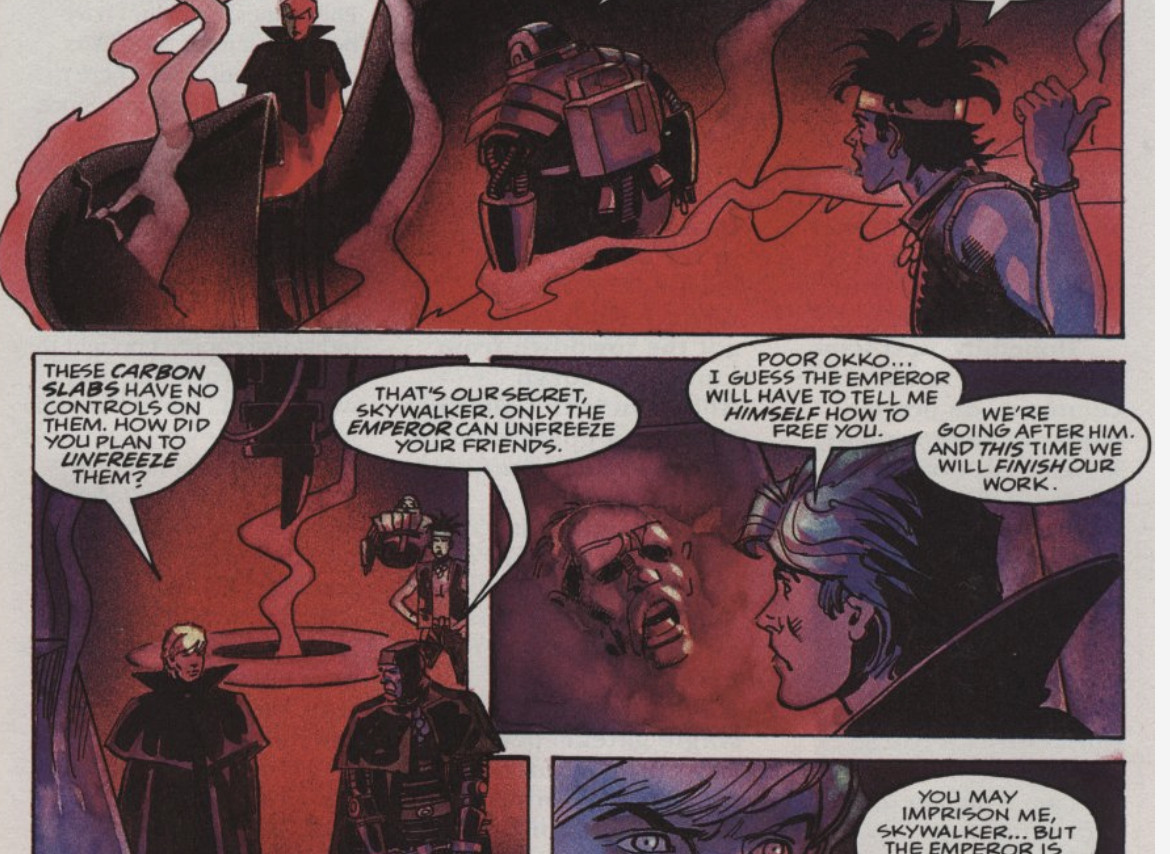 They included a unique special feature different from what was done with, say, Han Solo:

That’s our secret, Skywalker. Only the Emperor can unfreeze your friends.

Unfortunately, the Emperor meets an untimely death. There was no indication, and in fact, generally impossible circumstances for Skywalker to have obtained the secret to freeing the Ysanna before the Emperor’s death.

And in any case, he ultimately dies a final death under any circumstance in canon in Star Wars Episode IX: The Rise of Skywalker, again without any indication in any post-2012 Legends continuity, that anyone bothered to remember to free Okko.

Is Chief Okko and the carbonited Ysanna still slabbed in carbonite?

The 2008 The Complete Star Wars Encyclopedia has the most recent reference to Okko that I've been able to find. His entry ends with:

The resurrected Emperor, his clone forms ailing, needed Jedi blood to secure his grip on immortality. To that end, dark side enforcers captured three Ysanna shamans for their cloning experiments, including Okko. Captive and transported to the planet Vjun, Okko was frozen in carbonite to await the Emperor's clonemasters. The carbon slabs lacked controls, and the de-carbonization process was an Imperial secret. His fate was a mystery.

That he was never freed seems like the simplest explanation (or Okko's Razor, if you prefer).

Not the answer you're looking for? Browse other questions tagged star-wars star-wars-legends the-rise-of-skywalker or ask your own question.

14
Does the Rebel Alliance still exist after the death of Palpatine and Vader?
6
Was Empire Day still celebrated after the Fall of the Empire?
7
As per the latest canon, is Jango Fett still Jaster Mereel's protégé /adopted son?
8
What are they monitoring to determine that Solo is still alive?
18
Can content still be added to Star Wars Legends continuity?
10
Why is the outer-rim still considered remote, given the immense speed of hyper-drive?
16
Is it possible to skip The Last Jedi and still make sense of Rise of Skywalker?
3
Is Zorba still Jabba's father?
8
Why do the Jedi still teach forms for lightsaber combat?
13
How could the Death Star still be operational in The Rise of Skywalker?