How old is this returning character in Spider-Man: No Way Home?

In Spider-Man: No Way Home, we see the return of Tobey Maguire as Spider-Man. Some time has passed since his own movies, in which he played a character jarringly younger character than his actual self. 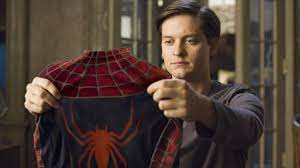 We hadn't seen this iteration of Peter since 2007. Since then, quite some time has passed, and even more in-universe, as the film appears to be set in 2024. But then again, other characters were brought back from just before their points of death (i.e. before 2007) to the same point in time.

In-universe, how much time has passed for this variant of Peter Parker since we saw him last, and what age does that put him at? Bonus points if it includes characters that haven't died, such as Sandman.

Depending on how you interpret this quote from one of the Spider-Man: No Way Home screenwriters, Chris McKenna, either the character or the actor was 43 years old coming into this movie. I think he's referring to the character, but it's a little ambiguous, because he keeps using the actors' names.

THE HOLLYWOOD REPORTER: You get to continue Sam Raimi’s and Marc Webb’s movies with small lines here and there. We learn that Tobey’s Peter is still with MJ. We learn that Andrew is in a dark patch and stopped pulling his punches after the death of Gwen. How much of a debate was that, figuring out what to reveal?

CHRIS MCKENNA We were like, “We’ve got to make them each very specific.” As writers, we kept saying, “Where are these characters in their lives when they come into the movie?” Where is Tobey? We’re not de-agifying him. He’s a guy who is 43, who is entering this movie, and Andrew Garfield, where are they in their lives? The last time you saw Andrew Garfield, it was the death of Gwen, and that must have sent him down a dark spiral, maybe he never got out of. We don’t know, because there wasn’t a third movie that we saw. Where did he go? Maybe a really dark place. We wanted to be true to the characters in those movies. Really having conversations about specifying where they are, without giving away too much. Not coming in, spilling all the beans. “Tobey’s Peter is running Peter Parker Industries!” You just wanted to have little hints of that without it being all this exposition as fan service.

How ‘Spider-Man: No Way Home’ Was “Shaped” by Its Secret Stars

For what it's worth, according to another article, Maguire and Garfield weren't signed onto the movie until December 2020, close to six months after Maguire's 45th birthday (June 27, 1975).

The film began shooting in October 2020, with Maguire and Garfield signing onto the project in December 2020. Filming wrapped in March 2021.

Spider-Man: Surprise actors did not sign on to No Way Home until halfway through filming

7
In "One More Day," did Spider-Man really have to make a deal with Mephisto?
29
Is The Amazing Spider-Man part of the Marvel Cinematic Universe?
4
How is Spider-Man's identity a mystery when Peter is seen performing unusual feats?
6
Did the Venom symbiote inhabit the Hulk?
2
How is the timeline of Marvel established amid the multiverse, reboots, etc?
10
Spider-Man and Fantastic 4 crossover comic with Double Identity Scene
2
What is the formula for Spider-Man's base web fluid?
13
Who's on the milk carton in Spider-Man: No Way Home?
14
Is the math done by Spider-Man in Spider-Man: No Way Home real or just made up?