Why is Mos Espa in a big hole?

In The Book of Boba Fett, much of the action takes place in the city of Mos Espa, previously seen in The Phantom Menace and Attack of the Clones. The version of it seen in the show has most of the city at the bottom of a large canyon or pit:

As far as I know, this is the first time this version of Mos Espa has been seen. In the 2016 edition of Complete Locations, for example, Mos Espa is pictured as being built on a flat part of the desert. It also appears to be in the middle of the flat desert in The Phantom Menace, although the scenes we see could just take place on the outskirts above the cliff.

I'm guessing this was a creative decision made to visually distinguish Mos Espa from Mos Eisley, which parts of The Mandalorian take place in, but is there any official word about this choice? In-universe and out-of-universe explanations are both welcome.

Mos Espa was, according to the original artwork and concept design for Star Wars Episode I: The Phantom Menace, always supposed to be portrayed as a city set into the desert. Essentially the goal was to replicate Luke's 'pit house' but on a city-sized scale.

Watto's Shop (and the events of the film) explicitly take place in the outskirts of the city, on the outer lip of the crater, hence why we don't see the dominating walls. 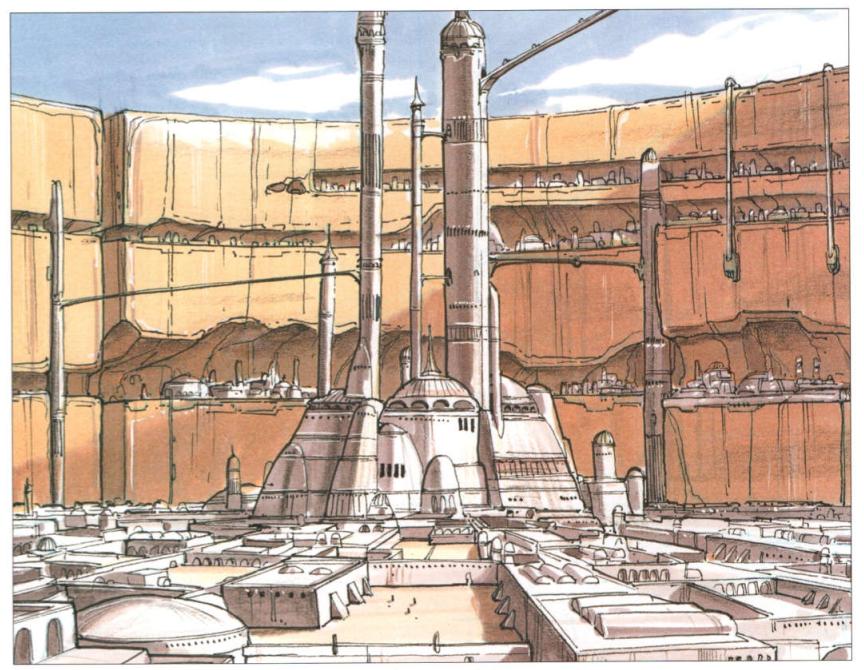 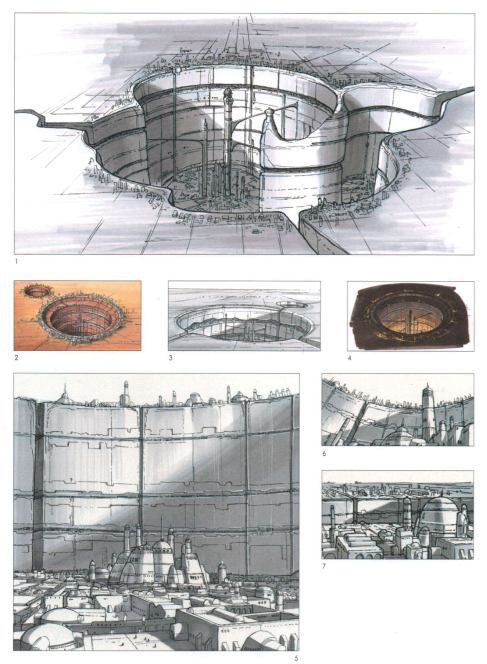 Images from The Art of Star Wars: The Phantom Menace

A real world explanation for putting a desert city in a big hole would be to get more shadow and/or to get it out of the wind. (Although I have to admit, I have not seen those movies, so I have no idea what the climate in that area is supposed to be like)

Not the answer you're looking for? Browse other questions tagged star-wars the-book-of-boba-fett or ask your own question.

6
Does it rain on Tatooine?

15
Why are many Tatooine ports prefaced with "Mos"?
65
Toilets in the Star Wars galaxy
6
Is there any evidence to suggest that Aunt Beru and Uncle Owen were killed by Boba Fett and not the Storm Troopers?
5
Time between Evazan/Baba appearances on Jedha and Tatooine?
52
Why does Greedo say "Maclunkey" in the Mos Eisley Cantina?
56
Why is a living creature being frozen in carbonite in “The Mandalorian” so common when it seemed so risky in “The Empire Strikes Back?”
6
What is the Physical Distance Between Mos Espa and Mos Eisley?
8
How long was Boba Fett with the Tuskens?