Whose voice is heard at the very ending of Vanilla Sky?

About the movie Vanilla Sky.

It has this obsession/delusion/illusion/paranoia thing about a guy frequently mistaking two women whom he is emotionally/sexually attracted to, Sofia (Penélope Cruz) which he truly likes, and Julie (Cameron Diaz) which was like a sex thing, and she ends up stalking him, and drives them both off of the bridge in a car at a high speed, supposedly killing herself and drastically disfiguring him.

The illusions come from a lucid dream hibernation program, which he enrolls in, in order to be restored by better medicine in a near future.

But Julie is also aware of the program. In the end, he wakes up in the future - no money left, but supposedly already repaired - and a voice says: "relax David, open your eyes", or "open your eyes David, you are going to be fine" in the alternative ending. The movie ends with no further explanation (which is actually very cool).

The voices from Julie and Sofia are quite similar, and they are both great actresses, and I couldn't distinguish from whom it is (I do believe that the alternative version is Sofia, but not in the 2001 version).

Is it Sofia who waited for him, but the movie hints that she had move on to another guy, and then he's all happy in a bright future?

Or is it Julie, who might have enrolled the hibernation program - as she was aware of it in a hinting scene - and deliberately crashed the car, and waited decades also on hibernation only to stalk him again in the future, and thus make his like miserable for a long, long time?

According to IMDB, the line was spoken by Scottish actress, Laura Fraser, whose 'character' or role in the film is named simply 'The Future'. 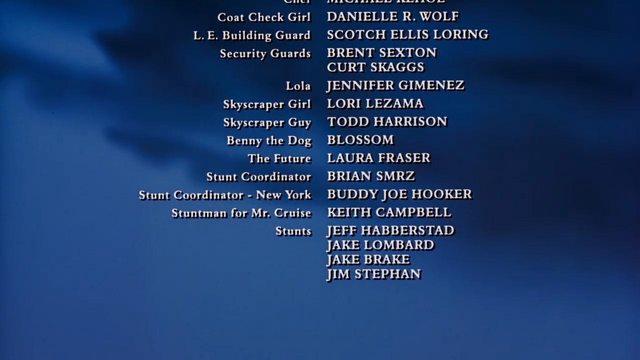 In the shooting script, the line is attributed to 'A WOMAN'S VOICE'.

An eye opens and the pupil darts to the right and left. Life again.

A WOMAN'S VOICE: open your eyes.

Within the context of the story, if we accept what the Tech Support guy played by Noah Taylor said in the closing scene, then the voice telling David to open his eyes as he's waking up from his lucid dream would presumably belong to an employee of Life Extension, the company responsible for his cryonic suspension.

It doesn't make much sense for it to be Julie, as she apparently died in the car crash that left David disfigured, which is what ultimately led him to go into cryonic suspension. He was also said to have been frozen for 150 years, so Sofia should've been long dead too, and it seems unlikely that either she or Julie could have afforded the cost of Life Extension's services.

Also, even if one of them did somehow go into suspension, how would they have known when to wake up, so that they could be there when David did? He wasn't put into suspension for a preset period of time, nor did he have to come out of it when he did. He made the choice to wake up at the end, but could just as easily have chosen to keep dreaming.

Plus, if you listen carefully, you can hear a hint of Laura Fraser's Scottish accent in the voice telling David to open his eyes at the end, which also suggests it wasn't either Sofia or Julie.

Listening to the voice saying...

Open your eyes, David. You're gonna be fine.

... in the alternate ending, that definitely sounds like a North American accent, rather than a South American or Scottish one. In fact, it sounds very much like Cameron Diaz's voice, Diaz obviously having played Julie in the film.

As I outlined above though, Julie being there as David wakes up from his lucid dream doesn't obviously make much sense in the context of the story, if you believe what the Tech Support guy said in the closing scene.

Not the answer you're looking for? Browse other questions tagged vanilla-sky or ask your own question.

4
When is Vanilla Sky's ending set, and what is that time period like?

4
When is Vanilla Sky's ending set, and what is that time period like?