I'm looking for a (mostly black and white) manga that I read a few years ago. I could have sworn the cover was of a young blond boy sitting on a throne, but I could be mistaken.

At the beginning of the story, the young boy remembers his previous life and is ridiculously overpowered since birth.

He hides all of this from his royal family of course. He lives in an extremely large and ornate palace. I think he reads/masters all of the books in the royal library.

One of his first acts is that he detects a monstrous ancient evil presence under the palace. He simply goes down and not only breaks the sealed demon out but completely dominates it and makes it his pet!

Even though he is only 6-8 (?) years old, there are many older gorgeous women who are madly in love with him. In particular, his maid/teacher/sword instructor is gorgeous and somewhat overpowered herself. She fights monsters with him in a dress/ball gown.

In another scene, he and the maid fight and kill a large spider (?) in the forest.

He also has a successful dashing older brother; I thought he was a potential antagonist, but he genuinely seemed to care for his little brother.

So, can anyone identify this manga? This is all I can remember, unfortunately. It seemed to be a popular story.

This is likely Tensei Shitara dai Nana Ouji dattanode, Kimamani Majutsu o Kiwamemasu, or I was reincarnated as the 7th Prince so I will perfect my magic as I please as per Manga about a male student of magic who was killed by a noble, and reborn as a noble child, answer also provided to Not sure if isekai but MC dies and while he's dying he says he wants to study magic. 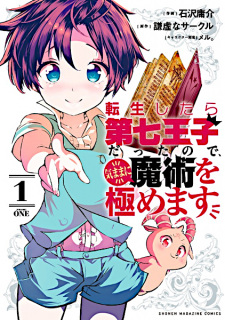 A magic nerd's life came to an end after a dreadful encounter with the nobles who ended his life with a powerful spell. His last wish, being able to study and master more magic, has been answered when he was reincarnated as Lloyd de Saloom, the 7th prince of Saloom Kingdom. Now he'll be able to perfect his magic as he pleases...

He defeats a majin in the basement of the castle, sealing him as a familiar. While he does have a beautiful maid who is also his sword instructor (and insists on bathing with him, providing some fan service), I don't think he fights with her, at least not in the first several chapters, but he does meet a female martial artist who is highly enamored with him, in part because he masters chi breathing almost instantly.

And indeed, he does have older brothers who dote on him, and are mildly suspicious of his growing abilities, despite his attempts to hide them.

0
Manga about a male student of magic who was killed by a noble, and reborn as a noble child
2
Not sure if isekai but MC dies and while he's dying he says he wants to study magic

9
Obscure fantasy movie involving flying sea-galleons and a time weapon
6
Fantasy manga about a girl who travels back in time to old Japan
6
Manga with main character waking up in a different world to see a girl pursued by a butcher wielding a gun with a parasite in it
5
Isekai manga where a guy gets reincarnated as a nobleman's son and invents Othello
5
Isekai Manga: 1st prince is abandoned after going in coma but his soul returns from the Hall of Heroes having had extra training
8
Manga set in a world where most people have classes, but the MC doesn't, so he trains to replicate the skills of those who do
3
Manga about a reincarnated boy, abandoned by his parents due to a lack of skills
4
Manga where the MC is a magician who gets reincarnated and adopted by goblins