What creature did Boba encounter while digging for water?

In S01E01 of the The Book of Boba Fett, "Stranger in a Strange Land", during a flashback scene Boba is tasked by a Tusken villager to dig for water pods with another captive.

During this digging process the Rodian captive uncovers a claw which is quickly revealed to be attached to a large 6 armed/legged monster. To my knowledge this creature has not been seen in the Star Wars galaxy before. It is quite unique as it has ability to switch its 6 appendages between 2 arms and 4 legs to 4 arms and 2 legs.

Boba Fett defeats the creat by choking it with the chains he was bound with and taking the decapitated head back to the Tusken village.

What is the name of the species this creature belongs to?

Is it native to Tatooine or can it be found on other systems as well? 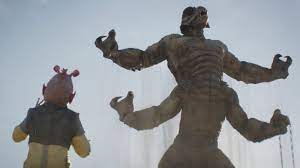 This creature is known as a Tatooine sand ape according to the Databank.

Feral beasts that lurk beneath the sands of Tatooine, sand apes spring up seemingly out of nowhere to startle, stun, and maim their prey. The creatures are one of innumerable hazards for anyone trekking across the endless desert. For the Tusken Raiders, tangling with a sand ape can win praise and respect.

Its only location is listed as Tatooine, so it may be a native species.

Not the answer you're looking for? Browse other questions tagged star-wars object-identification the-book-of-boba-fett or ask your own question.

14
Did Deadpool fight Boba Fett?
5
Was Boba Fett ever motivated by revenge for his father's death?
6
What is the giant creature at the end of the Battlefleet Gothic Armada 2 Trailer?
12
What creature does the dinosaur-like skull on Ahch-To belong to?
5
What is Han Solo’s age coinciding with the present-time of Book of Boba Fett Episode 1?
11
In what way was Boba Fett "double-crossed"?
9
Why does Boba Fett look for his armor in the Sarlacc Pit?
0
Why wasn't Daniel Logan brought back for Boba Fett?