Was Obi-Wan Kenobi referring to a particular civilized time?

Luke Skywalker was wielding his father's lightsaber, whose light played across the ceiling of Obi-Wan Kenobi's hut, when the old hermit said:

“An elegant weapon for a more civilized time”

Was Obi-Wan referring to a particular time in the history of the Galaxy that he was visioning or that he had lived or heard about? If so, what time was this?

Obi-Wan's remark on civilized times came back to my mind after watching a scene, from The Book of Boba Fett, where Garsa Fwip tells Krrsantan:

...in a more civilized place, in this more civilized times, what was once celebrated in the bloodlust of the arena, is now seen as horror and cruelty.

The above made me wonder if Obi-Wan was referring to civilized times from a personal or from a galactic point of view. 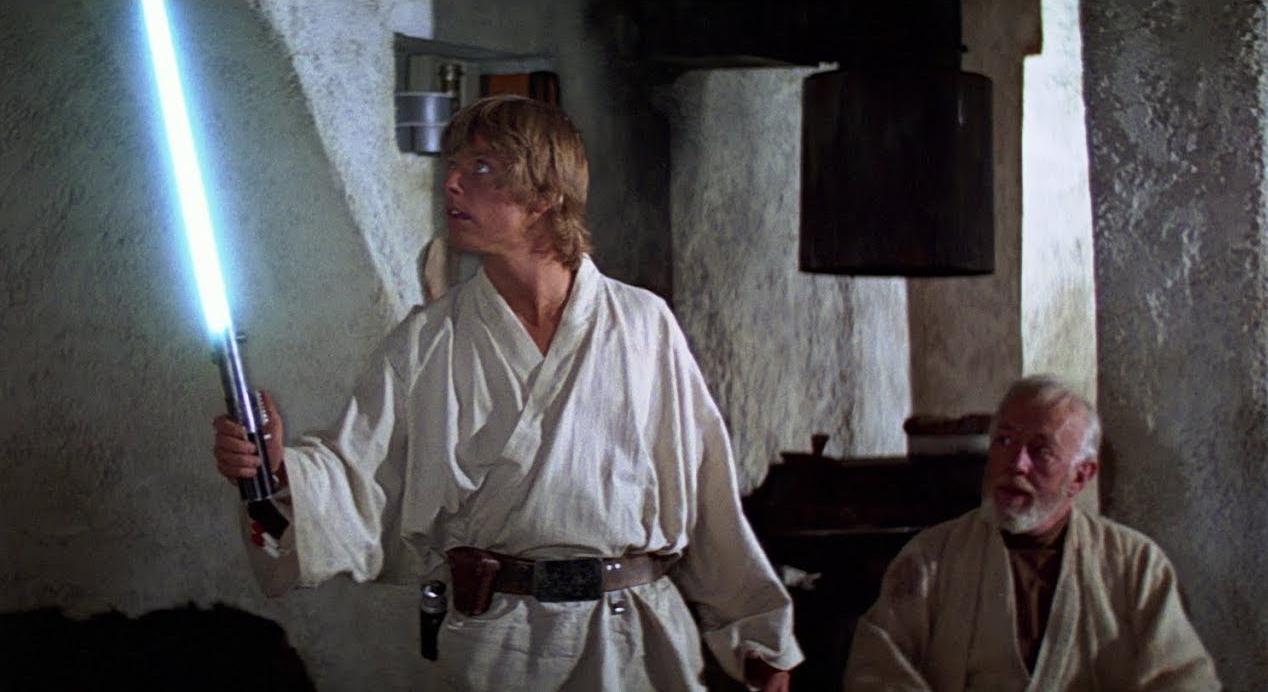 In Star Wars: Episode I - The Phantom Menace we see the Galactic Republic, the society in which Obi-Wan was raised and trained. We see the grand Temple of the Jedi Order on Coruscant, where generations of Jedi live, meet, and train, the Senate that governs the Republic, and evidence of a safe, inclusive, and prosperous civilization. Even Naboo, a remote planet subject to a blockade and invasion, is clean, safe, and fairly well-off.

In stark contrast we are shown the world of Tatooine, which is outside the jurisdiction of the Republic, where there is visible poverty, slavery is accepted, and crime and random violence, or at least threats of violence, is unremarkable.

In a fairly short period of time the Republic and its society falls apart, with the Clone Wars erupting and leading to the collapse of the Republic and the rise of the Empire. (The Empire being militaristic, human-chauvinistic, and repressive.) In parallel, there is the destruction of the Jedi Order, starting with Order 66, and continuing with the Purge.

So Obi-Wan was born and trained in a period of relative peace and prosperity, only to survive the destruction of everything he was trained to value and protect. The "more civilized time" is the era they did not know was ending when he and Qui-Gon were dispatched to Naboo.

Not as clumsy or as random as a blaster.

as a direct commentary on this as well; blasters - in sufficient quantity - being responsible for the deaths of a great many of his fellow Jedi.

He's referring generally to the period before the Empire.

The full dialogue from this scene makes this clear.

OBI-WAN: Your father's lightsaber. This is the weapon of a Jedi Knight. Not as clumsy or random as a blaster. An elegant weapon for a more civilised age. For over 1,000 generations the Jedi Knights were the guardians of peace and justice in the Old Republic. Before the dark times. Before the Empire.

Clearly, he doesn't mean a particular era within the pre-Empire period. He's referring to the 1,000 generations when the Jedi were, as he put it, guardians of peace and justice. This is in contrast to the dark times they were currently in.

137
How many times was Obi-Wan less than honest with Luke?

34
Does Boba Fett know his exact relationship with Jango Fett? If so when/how did he find out?
33
Did Obi-Wan need to sacrifice himself to Vader?
88
Why specifically was Obi-Wan Kenobi the "only hope" of Princess Leia?
137
How many times was Obi-Wan less than honest with Luke?
6
Is there any evidence to suggest that Aunt Beru and Uncle Owen were killed by Boba Fett and not the Storm Troopers?
12
Why did Obi-Wan wait years after his death to tell Luke to go to Dagobah to find Yoda?
10
What else was inside Ben Kenobi's chest?
23
Where did the mistaken idea of uncle Owen being Obi-Wan's brother originate?
10
What did Obi-Wan Kenobi and Chewbacca talk to each other about at the Cantina?