In what way was Boba Fett "double-crossed"?

In The Book of Boba Fett's Episode 4: The Gathering Storm, Boba and Fennec have this exchange:

Fennec: What's next for you?
Boba: I'm gonna find my armor. Then I'm gonna kill that bloated pig who double-crossed me. Take his throne.
Fennec: You wanna head a Gotra?
Boba: Why not?

I couldn't quite make sense of this, since presumably he's talking about

Bib Fortuna, but it's not clear how or whether Bib and Boba had interacted before then.

Throughout his appearance in Return of the Jedi, Boba is taking orders from Jabba, and only falls into the Sarlacc because of his own decision to fly into the fray and get whacked with a stick by Han.

The closest thing that I can think of is the events of the War of the Bounty Hunters comic event, which occur shortly after Empire, before Han Solo is delivered to Jabba. In it, Solo's body is temporarily stolen from Fett. Jabba assumes that Fett sold it to someone else and puts a hit on him. For this, Fett is clearly annoyed at Jabba, and Bib Fortuna by-proxy. 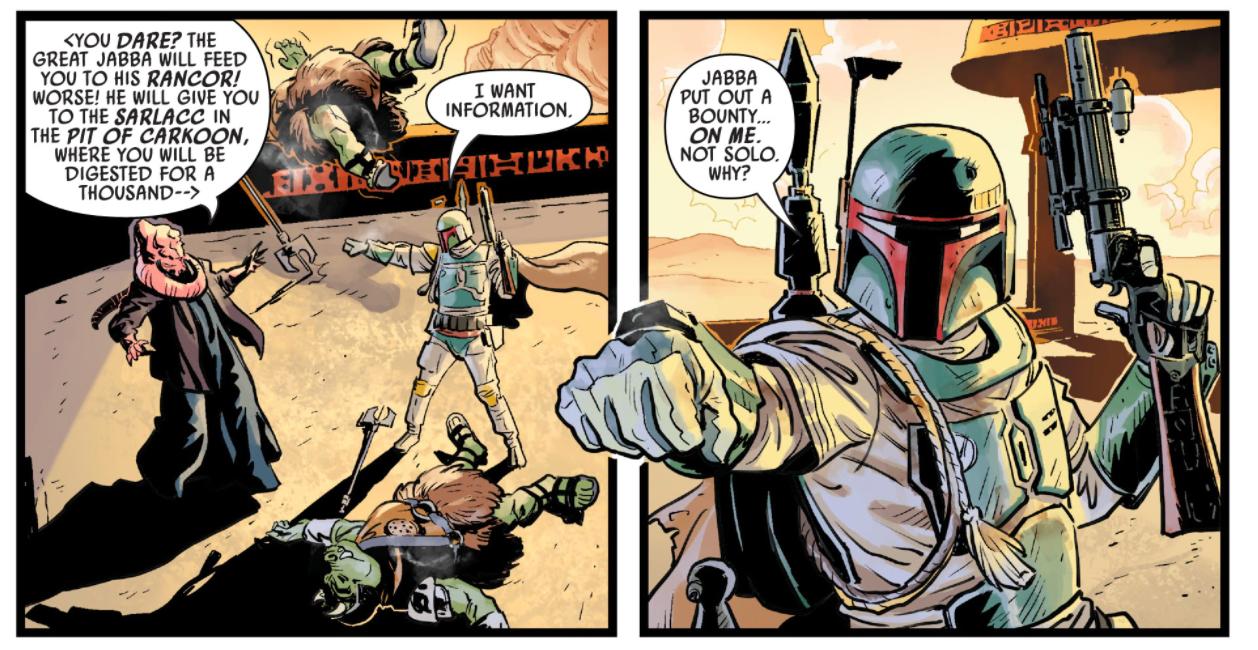 It eventually gets resolved, but Fett probably maintained a grudge over it. Throughout The Book of Boba Fett, Fett expresses disdain for the ruling style of Jabba and figures like him. In particular, he sets out to provide what Jabba didn't: loyalty.

I can offer you something no client ever has... Loyalty.

The comic incident is the most obvious example of Jabba (and Fortuna) being disloyal to Fett, so I wouldn't be surprised if this is what he was referring to.

Not the answer you're looking for? Browse other questions tagged star-wars boba-fett the-book-of-boba-fett or ask your own question.

7
Was Boba Fett originally supposed to be in Episode 4?
11
What is the timeline of the rescue of Han Solo?
19
Was Boba Fett the first clone?
16
Are these scenes from the Star Wars prequels reused in The Book of Boba Fett?
8
How long was Boba Fett with the Tuskens?
9
Why does Boba Fett look for his armor in the Sarlacc Pit?