This sounds like In Death Ground (1997) and The Shiva Option (2002) by David Weber and Steve White, part of the Starfire series. 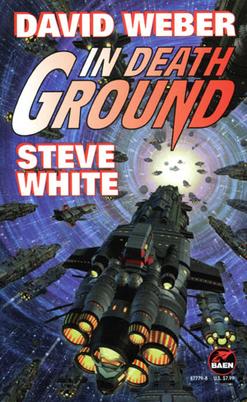 In this story Humans who are allied with "Orions" (cat-like aliens) and several other species (including "Gorms", sort of troll-like, and Olphiuchi, roughly bird-like) encounter and fight against an insectile/arachnid species known as "Bugs". The bugs are implacable conquerors, who reduce conquered species to food animals. They also seem, at first, to have almost unlimited resources.

Several species not previously known to humans are encountered during the second book, and become allies of the humans against the Bugs. All humans are part of a single interstellar government.

There are multiple classes of warships and freighters, similar, in roles and names, to naval ships circa WWII. Ships go from one system to another using wormholes known as "warp points" that must be searched for. Most systems have only a small number of warp points, less than 10, some only 1 or 2. There are different numbered "types" of warp points. Some are detectable only from one end. Fortress space stations often defend wormholes, taking advantage of the disorientation felt by crew and computers on passage, and by the need for all ships to appear at a known location. Minefields accompany such fortresses. Fortresses are known as OWPs, and come in several numbered types.

Combat uses a combination of missiles and energy weapons. One type of energy weapons is known as "primary beams" in what seems to be a nod to the much earlier "Lensman" novels of E.E. "Doc" Smith.

Humans and their allies never succeed in communicating with the Bugs, but we get a few scenes from the Bug PoV, in which they refer to their most populous and developed star systems as "Systems that must be defended".

All the items listed by the OP match except that the spider-like "bugs" are clearly antagonists, not protagonists

The "starfire" series grew out of backstory for a space fleet wargame that Weber had worked on.

16
What book has tall transparent cylindrical column-shaped aliens defending massive mega-structures?
5
Trader on a frozen world during social upheaval
6
Moon base, magnetic trap, and spider-like aliens in space
13
Sci-Fi book where spider-like alien lives on the hull of a ship and configures his web to forecast space weather or the future?
5
2000s SF series about exploration and escaping from dangers, including a humanoid bird species
7
Man awakes in space around other people and wakes them up early, involves spider-like aliens
13
70s/80s Sci-Fi book with teleport gates on sub-light spacecraft and an army space suit
12
Scholastic sci-fi anthology book containing a short story about a planet with crystal monsters