In or before 1961 I spent some time at a Boys Club in Philadelphia, and one thing I did there was read comic books.

I remember a Thor comic book in which aliens (possibly the Kree or the Skrulls) were on Earth and Thor was opposing them. I remember a scene where the aliens were using their greatest weapon on Thor but Thor continued to fight. And one of the awestruck aliens said something like "Never before, since time's first dawning, has any being displayed such power!"

And I remember thinking what a great exaggeration that was. How could anyone know more than a tiny, insignificent proportion of all that has happened since the universe began?

I kind of feel like saying something like "Never before or after, since time's first dawning, has any being uttered such exreme hyperbole!", but my knowledge of comics makes me suspect that there are probably even greater examples.

So can anyone identify the Thor story with such hyperbole?

This is Thor Vol.1 #131 (1966), specifically the story "They Strike from Space!" in which Thor resists a Rigellian psychic weapon and the aliens are impressed, with one of them stating:

"Behold! He begins to rise! He threatens to break the Mind Thrust!"

"Never -- since time's first dawning -- has any living being displayed such power!" 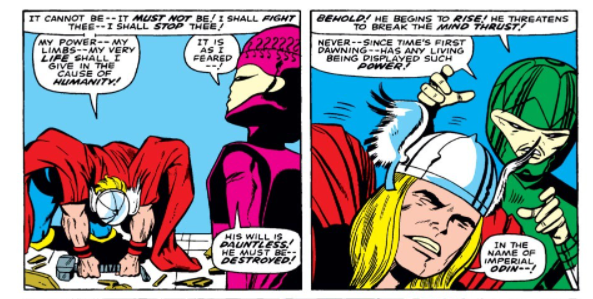 8
Help Identifying SF Short Story - Reads like a series of instructions about trials/tests with survival odds
13
When was Thor first portrayed as an advanced alien, not a god?
14
Story about a motorcycle accident survivor with anterograde amnesia
11
Book Identification: Humans, stuck on alien planet, cannot eat food, have to teach aliens technology to survive
8
Looking for 50s or early 60s juvenile book about boys 13 and 15 going to other side of moon and saving a civilization there
11
Sci fi novel where Earth is occupied by a colonial power (alien )
15
The original Infinity Gauntlet
9
Old children's story with family exploring asteroid belt