I was reading a manga where the MC was reincarnated into another world after receiving two XP related skills/blessings from two goddesses as they had a mix-up and both gave him a skill/blessing when he should only have one, I believe they were something like 20 times growth and 1/20 XP needed, or something along those lines.

As per Manga where a goddess gives a character 20xp, then another goddess gives him 1/20 Level Up but he stays jobless, this is likely I've Became Able to Do Anything with My Growth Cheat, but I Can't Seem to Get out of Being Jobless (AKA Seichou Cheat De Nandemo Dekiru You Ni Natta Ga, Mushoku Dake Wa Yamerarenai You Desu).

I, Ichinosuke, failed to get a job for 100 consecutive times. Furthermore, my record is still being updated as unemployed.

On my way to a job interview, I was involved in an accident with a truck and tragically passed away.

And then, a Goddess bestowed upon me the ability to grow at a speed 400 times faster than normal, before sending me to a game-like otherworld.

However, knowing that I would not become stronger even if I continued growing while jobless, I aimed to get a job, but I found out that it was my terrible fate to remain jobless.

As my Growth Cheat and Jobless Cheat existed side-by-side in this otherworld, an adventure record, no doubt certified by the job-placement agency as a harmful book, begins here. 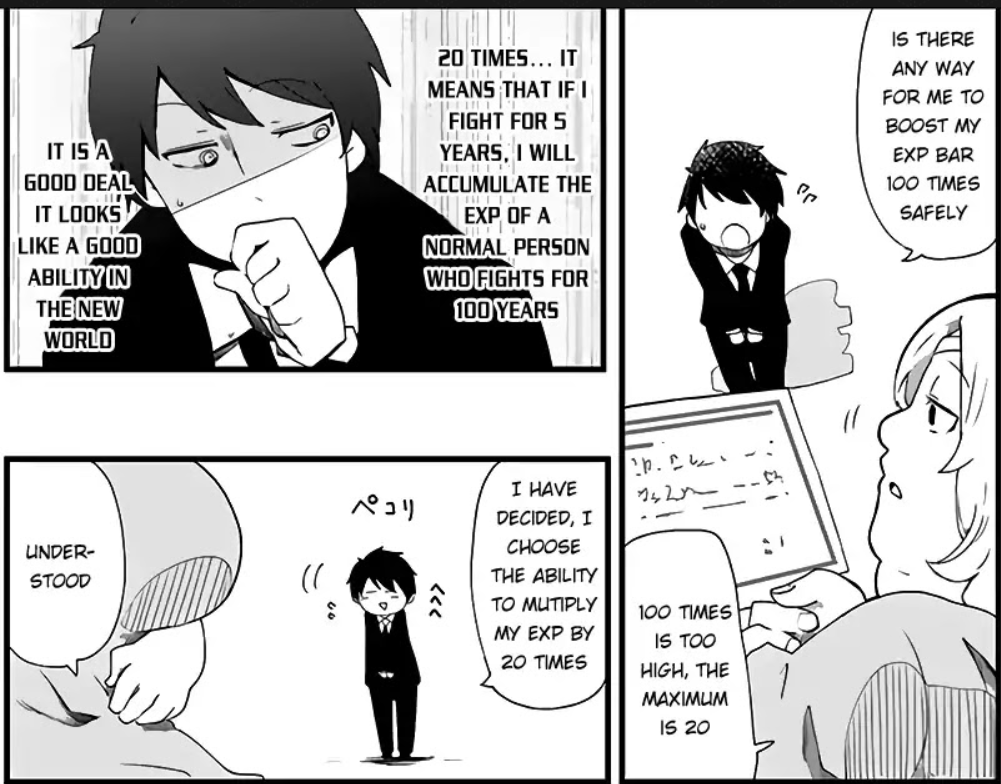 10
Fantasy book where two magicians travel to many worlds while being chased?
6
Manga with life burning power
3
Isekai Manga idenification
5
Woman transported to a medieval world, recruited by a prince to help his friends
3
Isekai shoujo manga identification
5
Manga with a repeated isekai and a white chamber where he can buy skills and equipment
2
Manga where the MC is chosen by a card to become a Demon King candidate
4
Male lead is last human surviving, who gets killed and reincarnated back to when he's a child
4
Manga where the main character is from our world, but the secret side that has magic, and is transported to another world