Did Getafix ever drink the magic potion himself?

It seems like Getafix, the druid (called Panoramix in most languages) usually just cooks it and serves it to Asterix and the rest of the Gauls.

Are there any examples of Getafix drinking the potion himself?

On page 42 of Asterix and the Missing Scroll (issue #36, published in 2015), Getafix is shown directly drinking the magic potion.

Asterix: "Go easy, Getafix!"
Getafix: "We have no time to lose. A single dose won't be addictive."

[Getafix drinks. He is shown flying in air with sparks and smoke etc.]

Getafix: "By Toutatis, it's certainly strong stuff!"
Asterix: (as Obelix reaches for the gourd) "Not you Obelix!"

They need to return to the village quickly. Getafix is drawn with jagged edges for the next couple of pages.

In addition to the cases mentioned in other answers, Getafix drinks the potion he made before the battle in Asterix and the Great Divide (issue #25, published in 1980), p. 27:

After that is the first (I think) occurrence in the series when Getafix fights, p. 28: 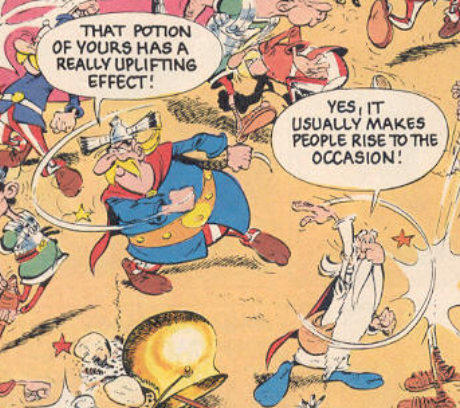 The second one is in Asterix and Obelix all at sea (issue #30, published in 1996), in which Getafix dives into the sea after a bottle of magic potion, gets attacked by sharks, takes a sip of the potion, and scares the sharks away. Yes, this happened. Though mostly off-screen, he only says about the sharks afterward.

If I remember correctly, these are all cases from comics written and drawn by Uderzo, in which Getafix drank the potion in order to gain extra strength (and use it). There were no such occurrences in comics written by Goscinny and drawn by Uderzo (again, if memory serves me right). I did not read the newest ones by Ferri and Conrad, so I have no info about that. There is in the other answer though.

As Asterix returns from his failed quest for rock oil in Asterix and the Black Gold (issue #26, published in 1981), Getafix tells him

"Fortunately, after conducting a few experiments, I managed to substitute beetroot juice instead. We run just as well on beetroot juice, and it tastes nicer!"

The fact that Getafix says that it tastes nicer, suggests that he has tried it himself, although he may have heard it from the persons he tested it on.

In album 7, Asterix and the big fight, Getafix drinks a potion. It is not The Magic potion though but definitely a special one.

In the story, Getafix loses his memory and his mind. He brews a bunch of potions together with Psychoanalytix, another insane druid, that has random and decorative effects. Finally, they both put all the ingredients they have left in the cauldron and samples the result, which cures Getafix.

The resulting potion was the combined work of both druids, and the good result was a pure coincidence, but he was shown drinking it. 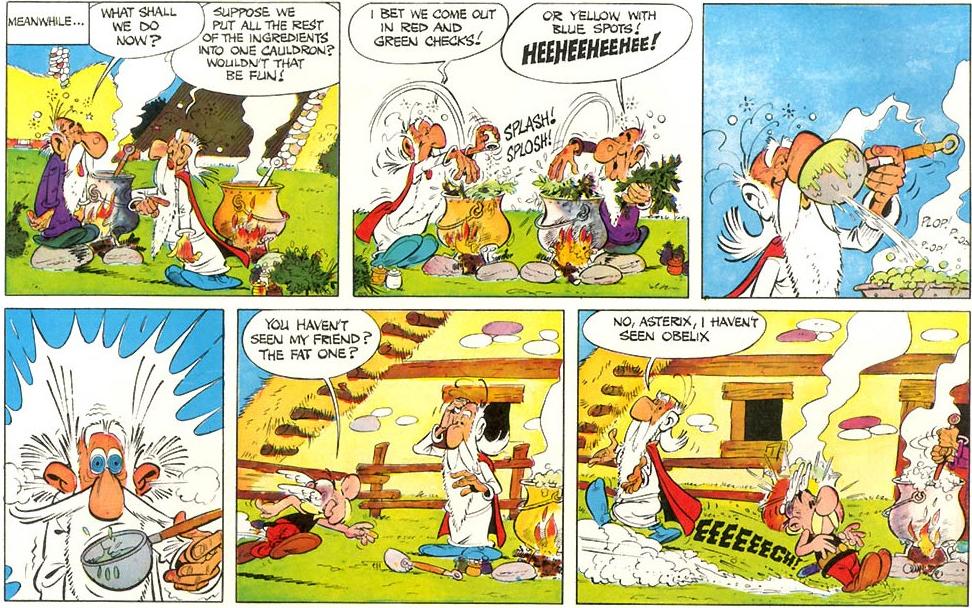 There are also instances where he has been brewing the potion and sampled it while it is still boiling. For example in Album 23 Obelix and Co he is making the potion while talking to Asterix and Geriatrix and tastes it to see if it is ready. 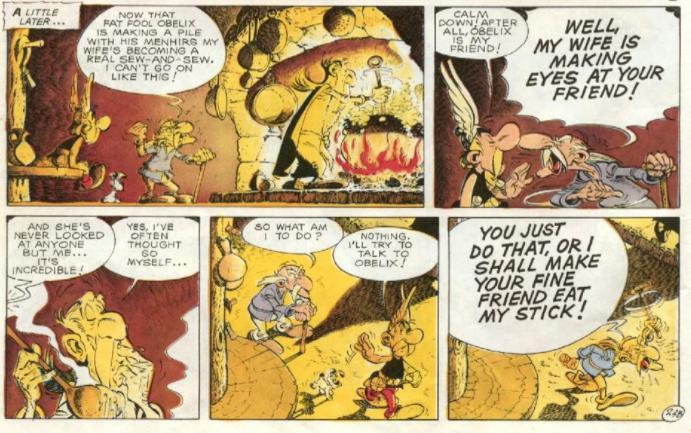 In neither case, he drinks it to get strong, but I think it is as close as we will get.

20
In the Asterix series, Why didn't the Romans just address the magic potion problem head on?
22
In Asterix and The Magic Carpet, why does Cacofonix's singing start producing rain?