Help identify story: 80s/90s childrens book about a child in a society ruled by robots

This was a short book I read in the late 80s or early 90s. I believe it has a cover of two robot policemen pointing guns and was probably called something like ".. of the robots" (I'm thinking War of the Robots, but that doesn't seem to match anything).

From what I remember of the plot, the main character is a boy at school in a society run by robots. The teacher is some sort of computer and one of the other pupils smashes it somehow. Police robots show up and have some sort of weapon that creates a sort of forcefield dome around their target. I recall they also had a gun which turned the victim to dust.

I have a faint recollection that there's a revolution in the end.

This is possibly War of the Computers by Granville Wilson. I've never read it and don't know much about it, however the book cover in this link seems to match the description of robot policemen pointing guns. 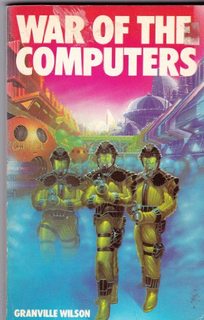 Summary from the back cover of the copy in the Internet Archive (with some guesses for the part covered by the sticker):

Charlie Harper lives in the world of AD 2010 — a world ruled by computers. Ruthless robot policemen menace the regimented human population. Charlie's grandfather remembers the days when people were free, and talks too much about them for his own good. Every aspect of life is controlled by the four unseen computers.

One day things start to go [wrong?]. A storm of meteorites sparks off a co[unreadable] conflict turns to war; and the people watch as their robot oppressors attempt to destroy each other and the automated world they have created.