Can a Vampire See Another Vampire's Reflection in a Mirror?

In the movie Interview With the Vampire, based on Anne Rice's novel of the same title, Claudia sits at a vanity with a mirror - her reflection doesn't appear and that got me to thinking:

Anne Rice's vampires seem pretty standard to me, but maybe there are other aspects of vampirism that I don't know about (Okay, I'm sure there is a good amount of vampire lore out there, but I'm asking anyway).

In the books, vampires can see themselves, and each other, in mirrors.

Interview with the Vampire, Louis (the narrator) speaks of his turning, and conversations with his sire Lestat:

And all the time, he belittled me and attacked me for my love of the senses, my reluctance to kill, and the near swoon which killing could produce in me. He laughed uproariously when I discovered that I could see myself in a mirror and that crosses had no effect upon me, and would taunt me with sealed lips when I asked about God or the devil.

He speaks of the company of other vampires:

I had the strong sense then of how we were all made from the same material, a thought which had only occurred to me occasionally in all the long years in New Orleans; and it disturbed me, particularly when I saw one or more of the others reflected in the long mirrors that broke the density of those awful murals.

In The Vampire Lestat, Lestat has just been turned:

I lifted from the treasure an exquisite pearl-handled mirror.

I looked into it almost unconsciously as one often glances in mirrors. And there I saw myself as a man might expect, except that my skin was very white, as the old fiend's had been white, and my eyes had been transformed from their usual blue to a mingling of violet and cobalt that was softly iridescent.

But it suddenly occurred to me, I am looking at my own reflection! And hadn't it been said enough that ghosts and spirits and those who have, lost their souls to hell have no reflections in mirrors?

In that last passage, we can also see that the myth of "those who have lost their souls" being unable to see themselves in mirrors exists in that setting -- but it is just a myth, at least as far as vampires are concerned.

As to the movies, I haven't seen them and can only speculate, but vampires not appearing in mirrors or photographs is a common part of vampire mythology, stemming from the use of silver in both mirrors and photographic emulsion -- the silver, being a holy material, wouldn't reflect the unholy image of the vampire. Based on that, I would expect that vampires wouldn't be able to see each other either, since the issue is that the mirror refuses to reflect them, not that they can't see a reflection that's otherwise there -- but that also means vampires should show up in modern aluminum-film mirrors and digital photography, when often they don't. So it's really up to the whim of the writer.

In the film, Interview with the Vampire (1994), it appears that both vampires and humans can see a vampire's reflection.

Louis wanders into the parlor, where Lestat is playing the harpsichord rapidly and exuberantly. Louis goes to a full-length mirror and sees his own reflection there - quite the perfect vampire.

By a large gilt mirror, in her new clothes. She is covered with jewelry, fixing earrings to her ears.

CLAUDIA: Why do you turn away? Why don't you look.

She twirls, looking at herself in the mirror, then stops, stares at herself.

Claudia stands up quickly, and strides out into the parlour where Louis is reading by the window. She walks to a mirrored cabinet, takes out a scissors and begins cutting her hair.

She continues cutting. She sees Lestat emerge from her bedroom in the mirror behind her then turns to him, an angelic little boy's face now with soft curls around her face.

Within the film itself, I don't see any scenes where Claudia or any other vampire sits or stands in front of a mirror without their reflection being clearly visible. In fact, we see vampires clearly reflected in mirrors in at least half a dozen scenes throughout the runtime.

One of the most notable examples is the scene where Claudia cuts her hair. She's pretty clearly looking at her reflection in the mirror as she does this, and then -- after running into her bedroom -- it's the sight of her reflection in another mirror which lets her know that her hair has already grown back.

There's also a scene -- around 71 minutes into the runtime -- where Claudia is in what appears to be a boutique, with four (presumably) human attendants. We can see her reflection in the mirror, she seems to be looking at it herself, and it's likely that the people around her could see it, as they appear to be treating her like she's a normal (albeit, wealthy) girl, rather than a vampire. 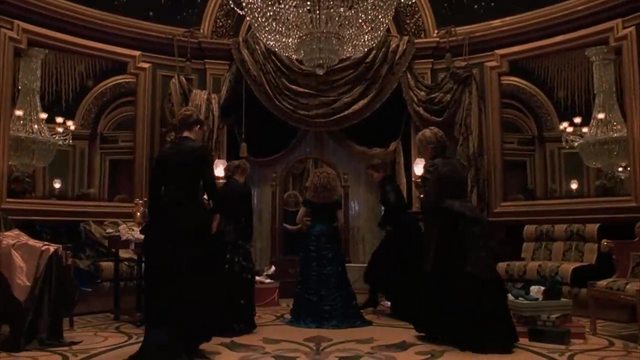 Furthermore, Louis explains that Dracula is the vulgar fiction of a "demented Irishman" (i.e. Bram Stoker) in this universe, and that the conventional vampire weaknesses to garlic, crucifixes, and stakes through the heart don't apply here either. So this film pretty clearly plays by its own set of rules, rather than adhering to all the familiar vampire tropes seen in other movies.

DANIEL: What about crucifixes?

DANIEL: Can you look at them?

LOUIS: Actually, I'm quite fond of looking at crucifixes.

DANIEL: And the stake through the heart?

Interview with the Vampire (1994) - transcript

LOUIS: We searched village after village... ruin after ruin... country after country. And always we found nothing. I began to believe we were the only ones. There was a strange comfort in that thought. For what could the damned really have to say to the damned?

DANIEL: You found nothing?

LOUIS: Peasant rumors... superstitions about garlic... crosses... the old stake in the heart. But one of our kind? Not a whisper.

DANIEL: There are no vampires in Transylvania? No Count Dracula?

LOUIS: Fictions, my friend. The vulgar fictions of a demented Irishman.

Interview with the Vampire (1994) - transcript

Why You Can’t See Vampires In Mirrors

I did a bit of research into why vampires were invisible in mirrors in the first place, and some of the answers I unearthed were bizarre and downright hilarious, including:

As you can see, there’s a few explanations, and I like the soul-less one the best, although it doesn’t really hold water all that well if you’re trying to use it to build a fictional world. You’d have to find, I think, a better explanation for no reflections if you were going to use it in modern vampire fiction.

Not the answer you're looking for? Browse other questions tagged vampire anne-rice interview-with-the-vampire or ask your own question.

21
How can a vampire in Twilight be killed?
0
How fast can a Twilight vampire heal from a gunshot?
6
90's vampire anthology book, including a story about vampires having taken over, told by a vampire's servant, killed by a nun
4
Book about stranded vampire-like aliens in conflict with one another