In which comic did Spider-Man remove his mask to a little girl?

I'm looking for a comic where Spider-Man removes his mask to smile at a little girl. The art is realistic. Seemed pretty much like a panel from Alex Ross.

The girl in this snippet says something to herself, something like that Peter's face "looked like the most common face she ever saw", I think is from the Spectacular Spider-Man but don't know what number.

I recognised this premise from the 1990s cartoon episode Make a Wish and Attack of the Octobot.

So the comic where he takes off his mask to a child is 'The Amazing Spider-Man #248', however it is only in the cartoon that the child is a girl.

Neither episode has a line about Peter Parker having a common face though, but somebody in chat found the panels for me: 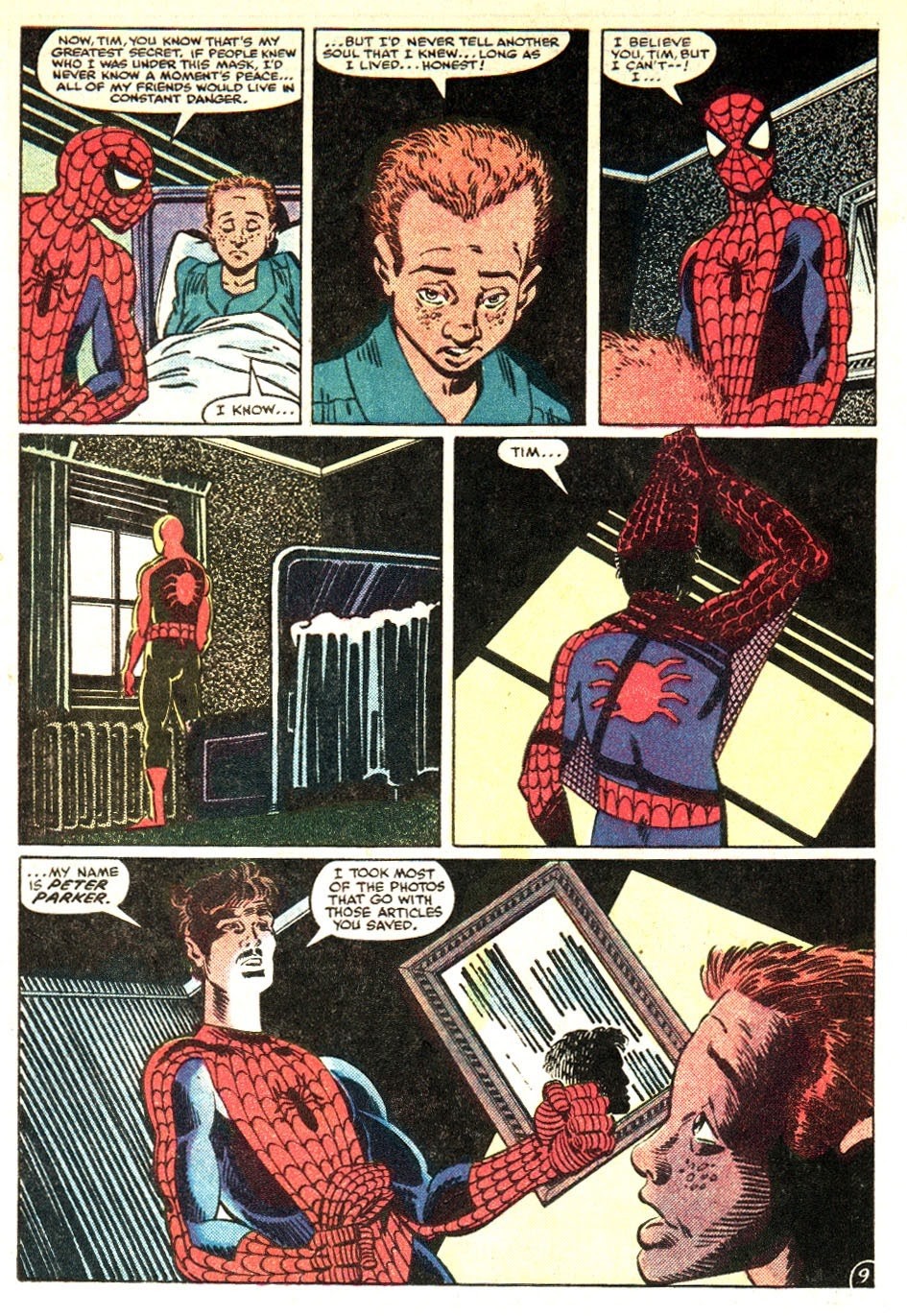 Spider-Man: Now Tim, you know that's my greatest secret. If people knew who was under this mask. I'd never know a moment's peace. All of my friends would live in constant danger
Tim: I know... But I'd never tell another soul that I knew... Long as I lived.. Honest!
Spider-Man: I believe you Tim, but I can't --! I...
Spider-Man walks to the window, then returns to Tim's bed and removes his mask
Spider-Man: Tim... My name is Peter Parker. I took most of the photos from the articles you saved. 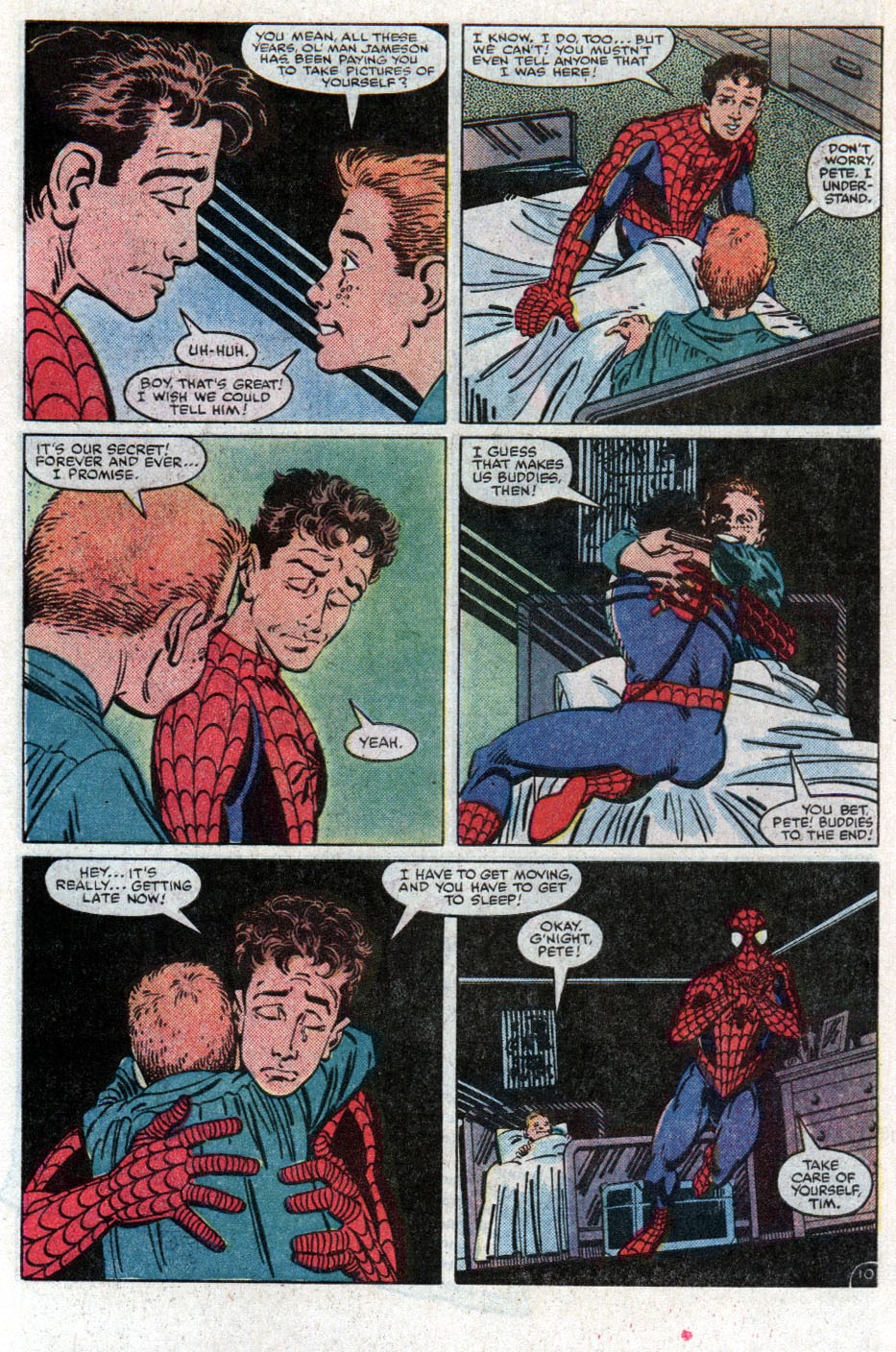 Tim: You mean all these years, 'ol man Jameson has been paying you to take pictures of yourself?
Spider-Man: Uh-Huh
Tim: Boy that's great, I wish we could tell him!
Spider-Man: I know, I do to... But we can't! You mustn't even tell anyone I was here!
Tim: Don't worry Pete. I understand. It's our secret. Forever and ever I promise.
Spider-Man: Yeah. I guess that makes us best buddies then!
Tim: You bet Pete. Buddies to the end.
Spider-Man: Hey... It's really... getting late now! I have to get moving, and you have to get some sleep.
Tim: Okay g'night Pete!
Spider-Man: Take are of yourself, Tim.

Not the answer you're looking for? Browse other questions tagged story-identification comics spider-man or ask your own question.

8
Which Spider-Man is he?
9
In which comic did Spider-Man remove his mask to rescue a girl?
4
Comic book about a girl who can see monsters hidden among us
11
Webcomic following a boy who's inhabited by a vengeful ghost who's after the men who killed her
10
Fantasy webcomic about an annoying child and her guide
4
Which was this comic where Spider-Man brought cookies for the Avengers?
8
Which 1970s Spider-Man cartoon had sentient alternate dimension plants?
7
Trying to track down a bizarre superhero comic involving gifted children who reunite in adulthood at their father's funeral
8
70s-80s DC comic in which a demon devours a man in a Superman costume