Was Dan Dare able to find his dad?

For years, since I was a kid, I was only able to read a compilation of Dan Dare stories that were translated into French. 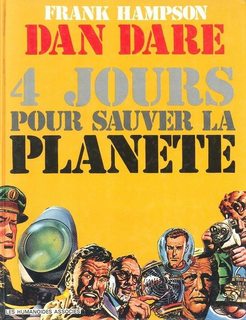 In this book, the last story is about Dan being abducted by someone who built a second version of a special ship that used a new kind of engine that was very fast (it's the green circle thing on the bottom left). In the end, as the abductor explained himself, we learn that this ship is a reproduction of a long project where Dan's father was on board when they lost contact, after a problem that destroyed the launch base. So he decided to use the second ship to find his dad.

The problem is that this book ends here, and I was never able to read the end of this story. So, can someone tell me how it ends?

According to this online listing, the TPB you read -- Dan Dare: 4 Jours Pour Sauver La Planète, or in English, Dan Dare: 4 Days To Save The Planet -- collected two previous Dan Dare story arcs: "The Red Moon Mystery" and "Safari in Space".

Eagle was a British children's comics periodical, first published from 1950 to 1969, and then in a relaunched format from 1982 to 1994. It was founded by Marcus Morris, an Anglican vicar from Lancashire. Morris edited a Southport parish magazine called The Anvil, but felt that the church was not communicating its message effectively. Simultaneously disillusioned with contemporary children's literature, he and Anvil artist Frank Hampson created a dummy comic based on Christian values. Morris proposed the idea to several Fleet Street publishers, with little success, until Hulton Press took it on.

In Eagle Vol. 10 #11 (March 14th, 1959), Dare learned that his father -- whom he believed had been lost piloting a ship called the Scotia, during a test flight thirty years earlier -- had actually piloted a secret ship called the Galactic Pioneer, on a journey to a newly-discovered planet, Terra Nova. At the end of this story arc, Dare left Earth for Terra Nova himself, hoping to learn what'd happened to his father.

DAN DARE: My father was chief test pilot of 'Cosmic Spaceships' -- but I always understood that he was lost on a test flight, in the Scotia, thirty years ago.

GALILEO MCHOO: Aye, laddie, he went on a test flight -- but it was in our secret ship, the 'Galactic Pioneer'! He took off from here, thirty years ago, to try to reach Terra Nova, a new world discovered by Halley McHoo.

SIR HUBERT GUEST: A crazy expedition if ever I heard of one! 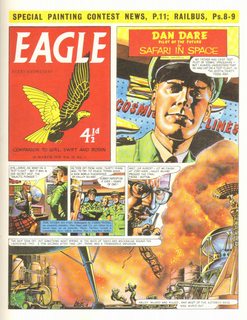 Dare and his shipmates eventually landed on Terra Nova, and in Eagle Vol. 10 #31 (September 19th, 1959), they met Rax, leader of the Novads -- a somewhat primitive Terra Novan tribe -- who informed them that Dare's father had arrived there thirty years prior, and spent two decades with the tribe, before leaving their city of Pax to seek out more advanced races, and technology that he could use to build and fuel a ship, to get home to his son. The tribe knew little of their planet, beyond the island they lived on, and nothing of what befell Dare's father after that, so this story arc once again concluded without the final fate of Dare's father having been resolved.

RAX: You are the son of 'Dare', who came here thirty Earth-years ago! I can see it in your face.

DAN DARE: I was a small boy when I last saw him. Please answer my question! Where...?

RAX: There is much to tell. Your father came from the 'Great Outside' alone. He dwelt with us for many years. Come -- I have something to show you!

Rax leads Dan and his comrades towards the strange hive dwellings...

RAX: He taught us many wonderful things and learned our language, while some of us learned his. He even gave us the name of our city -- Pax.

DAN DARE: But what happened to him?

RAX: Ten years ago, he set off across the 'Endless Water', as we call the sea -- a journey which none of us, the Novads, has ever dared to make. We have not heard of him since.

DIGBY: That's the second lifeboat from the 'Galactic Pioneer'!

DAN DARE: My father came in this?

PAX: Yes. He grieved because he was unable to save the life of his friend.

DAN DARE: How did he cross the 'Endless Water' -- and where was he going?

RAX: Our legends tell of other races in other lands on Terra Nova. It is said that they have what your father called 'science', and great knowledge of power and metals.

SIR HUBERT GUEST: Doubtless he was hoping to find some way of building and fuelling a ship to take him back to Earth!

RAX: True! He thought only of his son and finding a way to return to him.

DAN DARE: Have you maps, charts -- any way of telling us exactly where he went?

RAX: We Novads know nothing, except of this island upon which we live. 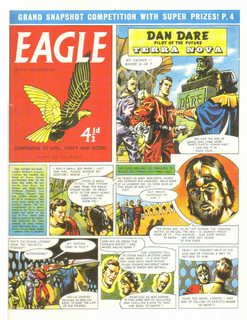 In Eagle Vol. 10 #45 (December 26th, 1959), Dare met Calo -- a native of Lantor, a more technologically-advanced country on Terra Nova -- who told him that his father had died a hero, helping the Lantorites in an attempted uprising against invaders from Gaz, yet another country on that planet.

CALO: We are safe here. Now I will tell you what you want to know... The enemy are invaders from the North, who overran our country some years ago... They, the men of Gaz, make cruel masters. It was while we struggled under their yoke that your father first came to our shores... He proved a noble ally -- he taught us the meaning of your Earth proverb 'While there's life, there's hope'... With his help, we planned a great uprising, but our plot misfired -- it was defeated, and many were killed.

DAN DARE: And my father? 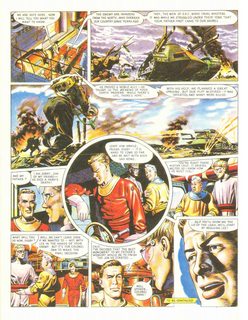 After this revelation, the remainder of the story focuses on Dare's efforts to finish what his father had begun, by helping to free the Lantorites from the people of Gaz, and once that's accomplished, Dare and his shipmates shortly thereafter leave Terra Nova to return to Earth. We're never shown the body of Dare's father, or a burial site for him.

The three story arcs --"Safari in Space", "Terra Nova", and "Trip to Trouble" -- were collected in the Dan Dare Pilot Of The Future: Terra Nova trilogy TPB.

I regret to say that Dan Dare never found his father alive. According to this blog post, in the 15th issue of Eagle, October 4th, 1959

‘Terra Nova’ rapidly degenerated into a fight with giant ants, whilst its successor, ‘Trip to Trouble’ took only five weeks to undermine the whole point of Hampson’s vision. In Xmas week, the new Eagle revealed that Dan’s father had been killed, offscreen and ten years earlier. Heartless, and pointless.

Not the answer you're looking for? Browse other questions tagged story-identification comics dan-dare or ask your own question.

9
SciFi book in English translated from French circa 1970-1980
19
Short story about generation ship leaving from Pluto
2
a children's book about a boy and his dad who are actually aliens
13
Sci-Fi short story possibly from a "Best of" anthology from the 1950s-60s about a space voyage with a secret engine activated via sex
14
Short story from 70s or 80s: statue of a cockroach brought back from the future
18
Short story where clocks have been banned