According to the DC Wiki page for Supermanium:

Supermanium is apparently the hardest metal in the known universe; it is practically as indestructible as the Superman himself.

And according to the DC Wiki page for Green Lantern Power Rings:

The ring can form constructs of Oan energy. The primary function of the Power Ring is to provide a weapon capable of transforming the wearer's thoughts into physical constructs through the wearer's strength of willpower. A Green Lantern can create any particular items or construct that they can imagine as long as they have the willpower necessary to will it into existence. The constructs are made out of green energy, which is a tangible form of pure willpower, and they exist only as long as a Green Lantern is fueling it with their willpower. Items created by the rings are not indestructible and are only as powerful as the willpower of the Green Lantern creating them.

However, the latter pages also states that:

Green Kryptonite has also been constructed using a Ring.

If a Green Lantern can create Kryptonite, doesn't this mean they can create objects with the physical composition and attributes of the original compounds?

N'gon subsequently fights Superman, and creates a "world of Kryptonite", which seems to weaken Superman as much as real Kryptonite. However, Hal breaks N'gon's concentration by hurling a rock at the back of his head, which causes the 'Kryptonite' to fade from existence.

N'GON: You may have known this ring's weakness, Superman, but I know yours! And where mine merely deters me, yours can kill you!

N'GON: A world of Kryptonite, Superman -- more of that killing radiation than you have ever suffered before! Slowly, it will insinuate its poisons through your previously invulnerable flesh -- and then when you can do nothing more -- you will die! 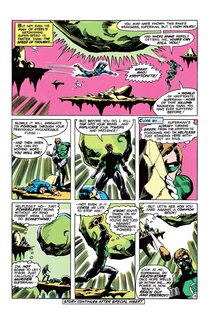 SUPERMAN: Not quite true, N'gon! Lantern distracted you, and without your willpower forming the Kryptonite, it just faded away! 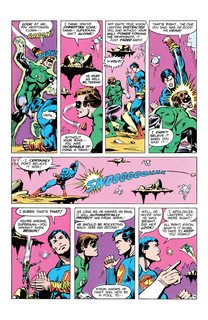 If N'gon had created real Kryptonite -- not just the radiation, but the actual physical substance -- it shouldn't have faded away like that, just because he wasn't actively concentrating on it anymore. It must therefore not have been real Kryptonite, but rather a facsimile of it, capable of producing the same wavelength of radiation as real Kryptonite, but lacking some of the physical properties of an actual Kryptonite rock, such as the molecular bonding of such a rock.

Further evidence that power rings can't truly replicate all the physical properties of other materials can be found in Green Lantern Vol. 3 #48. In this issue, Hal Jordan uses his ring to 'recreate' Coast City, shortly after it'd been destroyed in the 'Reign of the Supermen' storyline (specifically, Superman Vol. 2 #80). However, all of Hal's 'recreations' -- including the people -- are green, and everything fades away as soon the charge in his power ring expires.

HAL JORDAN: Think of it. The power to resurrect that which no longer exists... or create that which only exists in the mind's eye. All of it perfect in every detail. The power to make the dead live again... to redress any wrong... to rewrite history with a happy ending. 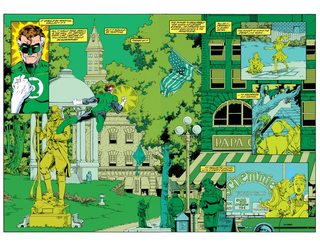 HAL JORDAN: No! Not now! Ring's charge is gone. It's not fair! 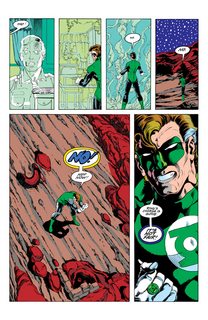 It doesn't make sense to think that Hal wanted everything to be green, or that he wanted everything to fade away as soon as his ring ran out of power; he was infuriated when that happened. The more logical interpretation is that while power rings can create facsimiles of people, buildings, cars, trees, etc, they can't replicate all the physical properties of those things, such as their colour (if they're not green) and their molecular bonding.

Hal Jordan's entry in Who's Who: The Definitive Directory of the DC Universe #9 states that his ring allows him to create objects "formed of the ring's emerald energy", which is consistent with the scenes shown above. When a power ring creates a 'Kryptonite rock' construct, it's apparently made of solidified emerald energy, not actual rock, and therefore lacks the molecular bonding of actual rock, which would allow it to exist independently of the ring wielder's concentration or ring charge. The same goes for constructs of people, buildings, cars, trees, etc.

Thus, the power ring can enable it's wearer to fly, to create giant objects formed of the ring's emerald energy, and to survive the rigors of deep space, among other uses. 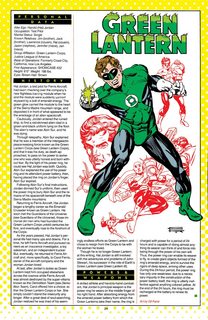 Who's Who: The Definitive Directory of the DC Universe #9 (November, 1985)

It follows from all this that a power ring can't create actual Supermanium metal. It could produce a construct that looks like (green) Supermanium, but it wouldn't have the same inherent molecular bonding as that metal. Rather, the strength and durability of the construct would depend on the willpower and concentration of the ring wielder, as well as the charge in their ring.

Not the answer you're looking for? Browse other questions tagged dc green-lantern powers or ask your own question.