From what I remember, I think it was a manhwa.

The female main character was killed in her world for supposedly trying to poison her younger sister (who it seems planned the whole thing to get the main character killed). After her death she reincarnates into another family in the same world with an older brother and is mute(?) for a while before eventually speaking at what I'm pretty sure was her birthday party (or some party).

There's a timeskip and she discovers that she has light spirit summoning magic and then, after she and her brother get poisoned, she heals her brother by summoning a spirit.

In the second life, because of her spirit summoning magic, she became a saintess. Her brother also swore some kind of oath to her to protect her I think?

This is Into the Light, Once Again

When Princess Alisa is framed for a terrible crime, she is shocked to learn that her own family wants her executed. Feeling defeated, she finds herself reborn as the princess of a rival empire. And though her new family acts sweet and kind on the surface, she’s not sure they can be truly trusted. Luckily, with this new life comes new power. But what exactly is this mysterious magic that awakens in her? And more importantly, can she use it to get vengeance against those who once betrayed her? 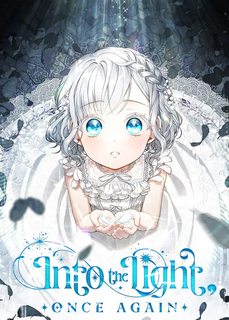 Synopsis covers the basic details in the question. The terrible crime is poisoning her sister, which the sister did herself. She is imprisoned and then executed. In her original life she has black hair and green eyes, and is reborn with white hair, much like her original life sister.

The magic is the ability to interact with spirits. She doesn't say anything until her birthday party, where during the fireworks she speaks her brother's name.

Athanasia gets accused of putting poison in Jennette’s glass, when in reality Jennette’s aunt was behind it, scheming to make her niece the first heir to the throne. On her 18th birthday, Claude kills her before she was even found guilty, stating that he never saw her as her daughter. Claude feels no remorse and Jennette suffers from regret until she comforted by her fiancé, Ijekiel, and the story ends.

Before the protagonist transmigrated into Athanasia’s body, she was shown once to have long, black hair. Her age at her transmigration is not specified, but using factors such as maturity and financial circumstances, it is surmised that she was around 18-30 years of age.

Athanasia is depicted with long, wavy blonde hair usually tied back into a high ponytail, with soft bangs falling into her jewel-blue eyes, the trademark of the imperial family.

In the new timeline, Athanasia developed the ability to wield magic. Due to her abundance of mana and innate affinity towards magic, she is capable of easily conjuring spells that would typically require years of practice, such as disguise her appearance, render herself invisible, conjure gold and jewels, and teleportation. The nature of her magic is related to time, allowing her to transcend dimensions. Her power reversed Claude's body nine years into the past, returning him to the cold-hearted emperor who had no love or regard for his daughter. Her magic has also allowed Athanasia to transmigrate several times before the current timeline. Lucas has speculated that her magic is strong enough to give her glimpses into post-mortem events.

Divine Beast
Athanasia possesses an overwhelming amount of mana. As a result, part of her magic manifested into the form of a divine beast. Although it is the corporeal form of a black wolf,[11] Athanasia decided to adopt it as a pet and name it "Raven." Continued interaction with Raven eventually resulted in an explosion of mana, almost killing Athanasia at the age of nine.[12] Lucas advised her against spending too much time with Raven to avoid disrupting her mana any further.[13] At the age of 14, Athanasia was mysteriously triggered and accidentally reabsorbed Raven in another mana explosion.[14] Since then, Athanasia has been able to freely wield magic.