How did one Star Wars character end up in possession of the lightsaber of another character?

So, here goes: In Episode 6 of The Book of Boba Fett.

We find out that [character A]:

Is in possession of a lightsaber that formerly belonged to [character B]:

How did he come in to possession of this lightsaber? What is known about how the lightsaber made it from Character A to Character B?

Below is a description of the limit of my knowledge of it:

The last I saw of it, Palpatine used force lightning to blast it out of Yoda’s hands in the big senate room. Yoda then falls to the senate room floor, and escapes in to what seems like ventilation ducts or utility access passageways without being shown to retrieve his saber. I know of no other canon reference to what happened to the lightsaber after that point. Though I know that comics references show that many lightsabers were rounded up and destroyed, I don't know if Yoda's saber, specifically, was included in that. The scene in question would seem to indicate that it escaped that fate, but how or why is beyond my knowledge.

From Wookieepedia, we can glean this:

However, he kept another lightsaber in a box in his hut[12] in 3 ABY.[13] After Yoda's death in 4 ABY,[14] that lightsaber ended up in the possession of Yoda's last Jedi apprentice, Luke Skywalker.[15]

Though this could be considered circular reasoning, because source #15 is the very book you cite. (The Book of Boba Fett – Chapter 6)
However, source #12 ("Star Wars: Complete Locations", a canon reference book) places one of Yoda's lightsabers in his hut on Dagobah.
Therefore I think it plausible that Luke indeed got it there.

The other question would be, how could any of the other characters recognise that it previously belonged to Yoda?

Unclear, but it's possibly a spare that Yoda kept on Dagobah

Currently, it's unclear where this lightsaber comes from, since canon sources disagree on whether Yoda had a lightsaber on Dagobah.

In Complete Locations (2016), there's a box in the corner of Yoda's hut that's described as containing:

This was originally established in an earlier edition of this page from Inside the Worlds of Star Wars Trilogy (2004), and apparently carried over to canon.

However, it was later established in the 2017 comic Darth Vader (2017-2018) #1 that Yoda didn't retrieve his original lightsaber, and it was destroyed: 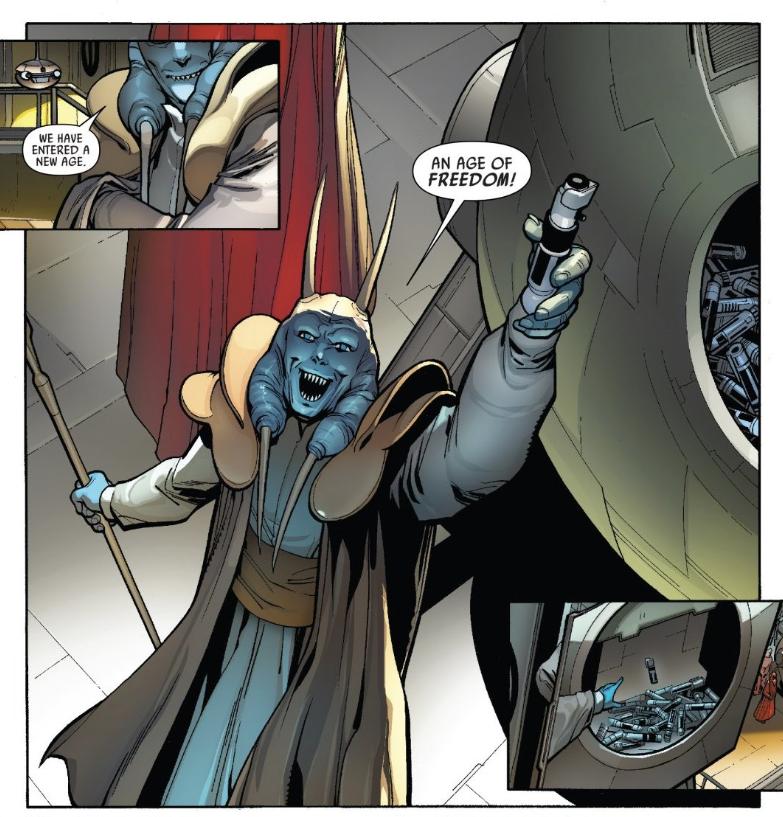 Lucasfilm's Matt Martin confirmed that this was Yoda's lightsaber in a tweet:

Yup we were aware of that. It’s not an error though, it was clear from RotS that he didn’t leave Coruscant with that saber. A 900 year old Jedi has probably had more than a few sabers in his life.

He built a new one. Or he had more than one. Or Palpatine made up a fake one to make a point. Y’know?

Errors, seek not. Stories, enjoy you should!

In the 2019 comic The Trial of Dagobah, however, it's also established that Yoda doesn't carry a lightsaber on Dagobah and has vowed never to do so again: 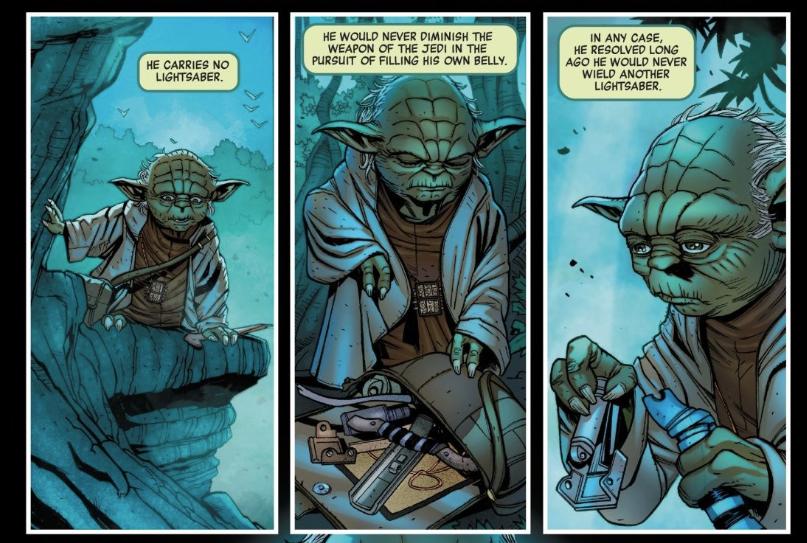 Narration: He carries no lightsaber. He would never diminish the weapon of the Jedi in the pursuit of filling his own belly. In any case, he resolved long ago he would never wield another lightsaber.

It's possible to make sense of this through some version of events where Yoda had or built a spare lightsaber, designed for his own stature, later decided to never use or carry it again, and then Luke found it on Dagobah, but as far as I can tell this hasn't been definitively addressed. Wookieepedia makes the same interpretation on its page for this lightsaber, Yoda's second lightsaber.

Not the answer you're looking for? Browse other questions tagged star-wars lightsaber the-book-of-boba-fett or ask your own question.

25
What happened in the Cloud City dining room?
17
Is there an explanation for why Yoda's grammar slips in Empire Strikes Back?
45
Who/what exactly does Darth Vader believe taught Luke between the events of “The Empire Strikes Back” and “Return of the Jedi?”
6
Is there any evidence to suggest that Aunt Beru and Uncle Owen were killed by Boba Fett and not the Storm Troopers?
10
Did Yoda (and other Jedi) have any lethal Force abilities?
40
How do bounty hunter tracking fobs/beacons work in “The Mandalorian?”
11
What is a chain code and how do they work?