Are Mystique's claws, when she duplicates Wolverine, made of Adamantium?

In X-men: Days of The Future Past, Sentinels are created using the DNA of Mystique, these Sentinels can imitate the mutant powers of other mutants such as turning into fire, turning into ice or turning into the steel-like substance Colossus is made of.

And in X-men (2000) , Mystique duplicates Wolverine, and she tries to kill Cyclops using her Wolverine-like claws, showing that they are at least similar to knives. But then later she fights Wolverine, and when the claws of both clash, Mystique's ones are cut, when Wolverine's remain intact. Does this mean her claws weren't made of Adamantium, or Wolverine just simply could cut her adamantium claws with his adamantium ones?

Are Mystique's claws, when she duplicates Wolverine, made of Adamantium?

As mentioned, Mystique-impersonating-Logan's claws were not Adamantium (probably some kind of sharpened bone with a metallic finish). In most depictions that I'm familiar with, Mystique's shapeshifting doesn't copy powers that aren't a direct consequence of body structure. She could copy Angel's powers, because wings are just an extra set of limbs, but she wouldn't be able to shoot lasers out of her eyes just because she made herself look like Cyclops. She can mimic a healing factor not because she's shapeshifted into Wolverine, but because she's shapeshifting the damage away. She also (generally) can't copy Colossus's powers (though she can make herself look like a big buff metal dude, her skin won't actually be metal). If I had to define what her powers do based on how she's depicted, I'd say her body repurposes its own biomass and changes the external appearance - she can't make her skin steel or her claws Adamantium, because steel and Adamantium aren't things that her body has available to copy.

As for the Sentinels, they were made based on Mystique's shapeshifting, and the guy who made them was a comic-book tech genius. Sentinel power-adaptation probably bears the same relation to Mystique's powers as a fighter jet has to a seagull.

Wolverine's claws are not naturally of Adamantium. His skeleton, claws included, are coated in Adamantium but the metal is not part of her powers.

So when Mystique copied Wolverine's powers she acquired the normal bone claws the Wolverine had naturally, but not the metal that coated the claws.

This is shown in Days of the Future Past, past wolverine did not have Adamantium in his claws and magneto needed to use metal to paralyse him. If Wolverine had metal in his skeleton in this situation then Magneto could have controlled him without anything else.

The official bios for the comics version of Mystique explicitly state that she can't duplicate the powers of the beings she imitates.

Known superhuman powers: Mystique is a mutant metamorph. She can psionically shift the atoms and molecules of her body and of whatever clothing she is wearing so as to change her and its appearances. As a result she can cause herself to look and sound like an exact duplicate of any human, humanoid, or semi-humanoid being of either sex, wearing virtually any kind of clothing. Her control is so exact that she can precisely duplicate another person's retina pattern in her own eyes, finger, palm and skin-pore patterns on her hands and skin, and vocal cords to match voices to the point of corresponding voiceprints.

Mystique, however, is limited by her inability to diminish or increase her own mass at will. As a result, while she can make herself look exactly like a person who is physically bigger than herself, she will not weight as much as the real person does. Although she can maintain the form of a person of her own height, weight, and build indefinitely (as with her own appearance as Raven Darkholme), the longer that she imitates the form of a person physically bigger than herself, the greater the strain she feels. If she maintains that bigger form for too long a period, the length of which is directly proportional to the difference in size between that form and her normal one, she will collapse and automatically revert to her normal form.

Mystique cannot duplicate the powers of the person she imitates: for example, when she turned herself into Nightcrawler, she did not gain his ability to teleport himself. As yet Mystique has not demonstrated any ability to adopt the form of non-humanoid beings, animals, plants, or non-living objects. Probably she could not imitate any of these without interfering with the proper functioning of her internal organs and possibly dying. 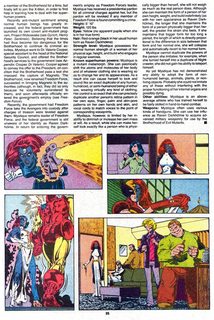 Unfortunately, there aren't aren't any official bios for the characters shown in the X-Men Cinematic Universe, and they don't talk much about the specifics of Mystique's powers in any of the films. A brief description of her powers was included on the packaging of a Mystique action figure, though.

Mystique is a mutant shapeshifter with the power to change her appearance. The metamorph naturally has a blue skin, scaled reptilian appearance, but she can make herself look and sound like an exact duplicate of anyone she chooses. This ability makes her the ultimate spy for Magneto's brotherhood because she can infiltrate any organization by literally becoming anyone. 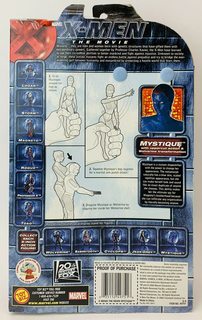 Note that it only states that she can make herself look and sound like the people she imitates. No mention is made of her being able to duplicate the powers of other mutants, nor is she ever clearly shown duplicating actual mutant powers in the films.

If she could assume the appearance of people like Professor X, Magneto, or Storm, and gain their powers in the process, you'd think she'd do that at multiple points in the films (especially in the fight scenes), as that'd greatly enhance her effectiveness in battle. Instead, she relies almost exclusively on hand-to-hand combat, and her own innate athleticism.

It's also notable that when she assumed the appearance of Storm in the first X-Men film, Wolverine was able to tell that it wasn't the real Storm, and it was implied that he did so via his sense of smell. If Mystique's imitation of Storm was truly perfect, right down to the genetic/molecular level, her scent should've been duplicated as well.

All of this suggests that the X-Men Cinematic Universe version of Mystique -- like the comics version -- can't imitate another mutant's biology perfectly enough to duplicate their powers. And if she can't do that, it seems even less likely that she can duplicate what is effectively a bionic implant, in the case of the adamantium on Wolverine's bones.

Also, if her claws were a perfect duplicate of Wolverine's, it doesn't seem likely that he could've sliced through them as easily as he did, given that later movies in this universe -- such as X-Men Origins: Wolverine and The Wolverine -- portray Logan as lacking the necessary strength to drive his claws through adamantium, unless they're in a super-heated state.

Not the answer you're looking for? Browse other questions tagged marvel x-men-cinematic-universe or ask your own question.

46
Out of two organic lumps of Wolverine, what decides which one would regenerate to full Wolverine?
13
Uncanny, Astonishing, Ultimate and Legacy...How does this tie in with X-Men?
10
Is there a set limit on mutant abilities, where they're deemed too unrealistic?
23
Can Rogue harness Wolverine's adamantium blades after touching him?
43
What happens to parts of Mystique that are cut off?
3
Why doesn't Toad slime Storm in X1?
7
Why do mutants get their specific powers?
7
Mystique and transformed physical abilities
9
What is the first time Wolverine cuts someone with his claws in a real way?
9
Can cold adamantium cut through adamantium?