Trying to ID a movie I watched in the '90s, featuring a spaceship with a logo showing a star being held between the thumb and index finger of a hand

I watched a feature-length movie on TV in Romania in the '90s. It was shown on the main TV station in the country, after 10PM, at a time when there was a single national TV station on the air and cable TV hadn't taken off yet. The money was scarce, so I speculate the TV station may have bought cheap direct-to-video productions in bulk. The movie was broadcast in English-language with Romanian subtitles.

Unfortunately, I was only a teenager when I saw this film, so I don't have clear memories of the story or characters. The strongest memory I have is of a spaceship with a logo on its side. The logo was a light human hand delicately holding a star between the thumb and index finger, on a dark background.

The logo was somewhat similar to this, but with a much smaller star, and a few other identical stars above/around the hand: 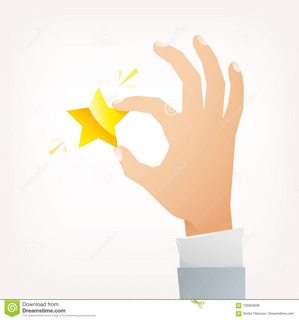 I don't remember the colors, probably because I likely watched the film on a small B&W TV I had in my room.

The ship design I can't really describe. The best I can do is some combination between a Lambda-class shuttle (Star Wars) and a Federation shuttlecraft (Star Trek). It was basically a small vessel with a small crew, its crew entirely shown on screen. I don't remember other technical details about the ship, sorry.

The film might involve an encounter with an alien entity on a planet. I seem to remember some laser-based perimeter security barrier that eventually the mysterious alien entity overruns. However, this might be part of a totally different movie I saw around that time. Sorry, this memory is much fainter.

I believe the spaceship model used in this movie also appeared in another movie I saw on the same channel during the '90s, although the ship had a different logo in the other film. I've asked a separate question about the other film here.

It looks kind of like the uniform insignia worn by the staff of Tantalus V in the Star Trek episode "Dagger of the Mind". 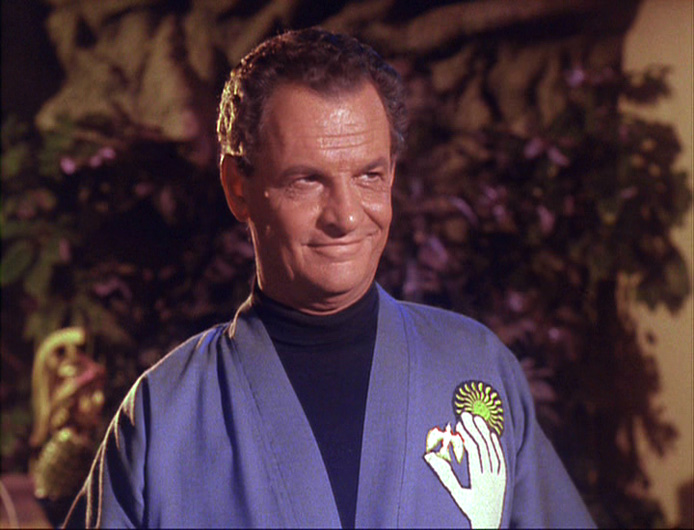 Is the ship one of these? 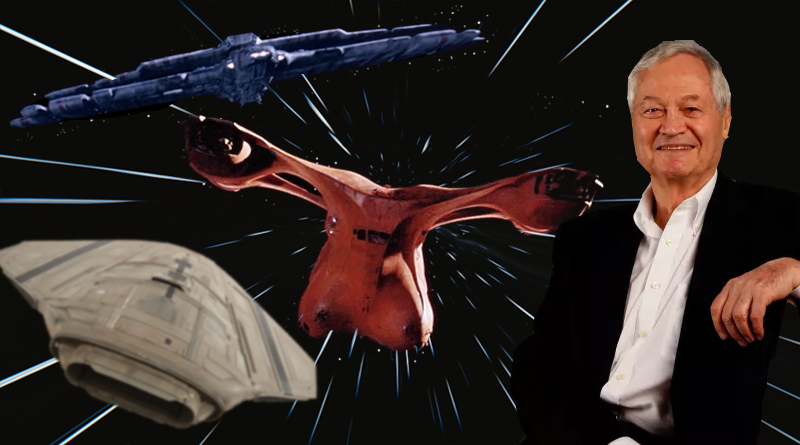 Originally used in Battle Beyond The Stars, and reused along with numerous other props and effects in Space Raiders.

I've not seen either film. Can't see any logos in the trailers. But I'll bet this is it.

Here are the trailers. You can see the reuse of effects even in this short clips.

Battle Beyond The Stars

Not the answer you're looking for? Browse other questions tagged story-identification movie space or ask your own question.

8
Trying to ID a movie I watched in the '90s, featuring a spaceship with a logo showing a dark, abstract, rectangular or parallelogram-like design

8
Movie from the 70s or 80s that had a Cyborg
9
Sci-Fi/Horror movie possessing robot with long neck
16
Early 90s sci-fi movie very similar to Star Wars with lightsabers and laser guns
4
Live-action movie or TV show from late 90s/early 00s with kids, a friendly spaceship/thing, and an evil guy
5
90s (or earlier) Japanese anime movie: two planets at war, young man is in love with princess from the other planet, and floods his own village
14
90s movie with psychics and an imploding spaceship
8
'80-'90s sci-fi movie about a prison spaceship orbiting the Earth
8
An animated movie or series (anime?). A huge spaceship found in a desert and the whole of humanity is trying to fix it