Why did the Sinister Six capture Aunt May and Betty Brant?

I'm reading some of the old Spider-Man comics by Stan Lee and Steve Ditko. I read the issue about the Sinister Six, when Dr Octopus captures Aunt May and Betty Brant. These are two of the closest people to Peter Parker, and are not affiliated with Spider-Man.

I'm suspecting that Spider-Man's identity has been leaked, but then the Sinister Six would've made it their top priority to spread it (maybe force magazines to publish it, if interviews are not possible).

Why would the Sinister Six capture these exact people out of the many people in New York (if they didn't know Spider-Man's identity)?

They only seem to have grabbed Aunt May because she was with Betty and they didn't want to cause a scene on the street (and possibly as leverage against Betty doing anything stupid or resisting). 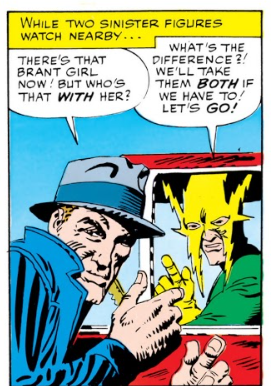 It all traces back to Amazing Spider-Man Vol. 1 #11. In that issue, Betty was coerced by a mobster named Blackie Gaxton into picking up Dr. Octopus upon his release from prison, as Gaxton had leverage over her brother, Bennett Brant.

BLACKIE GAXTON: Well, Brant? Did your sister do as I told her? I hope so, mister, for your sake!

BLACKIE GAXTON: She better not! That gambling debt you owe me is already past due! And you know what my boys do to welchers... don't you, Brant?

BENNETT BRANT: I know, Blackie! I've been your lawyer too long not to know!

BLACKIE GAXTON: I'll cancel the dough you owe me as soon as Dr. Octopus springs me from jail! And no sooner! Now get lost... I've got some thinkin' to do! 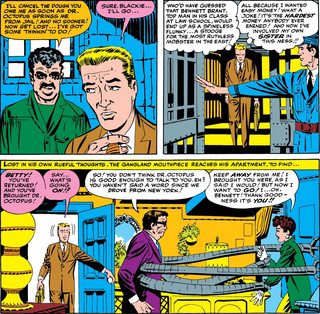 Later in the issue, Spider-Man came to Betty's rescue, and Ock apparently took note of that, as he decided to kidnap her from the Daily Bugle in the very next issue, figuring that since Spidey risked his life to save her once before, he'd likely do so again.

DOCTOR OCTOPUS: Good! Now that I know she is back working for the Daily Bugle, I'll be able to use her as bait to catch Spider-Man! He risked his life to help her once before... so why not again? 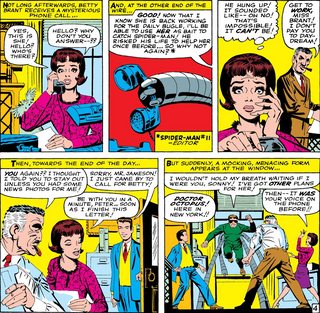 DOCTOR OCTOPUS: Now listen -- no one will be hurt if you do as I say! Jameson, put a note in your paper telling Spider-Man to contact you! When he does, tell him I have the girl prisoner at Coney Island! If he wants her -- he must come for her -- alone! 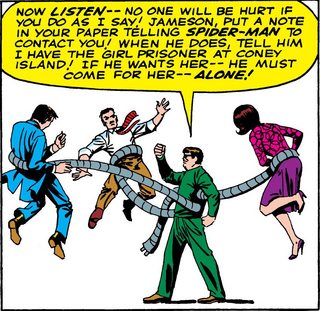 So the subsequent kidnapping of Betty in Amazing Spider-Man Annual Vol. 1 #1 was based on the same line of reasoning. Aunt May was grabbed too, purely because she happened to be with Betty when Sandman and Electro came for her. It was made clear that neither Sandman nor Ock actually knew who May was.

SANDMAN: There's that Brant girl now! But who's that with her?

ELECTRO: What's the difference?! We'll take them both if we have to! Let's go!

DOCTOR OCTOPUS: Ah, Miss Brant! Come in! I've been expecting you! And who is that charming lady with you?

SANDMAN: She says she's the aunt of some kid named Peter Parker, Doc! 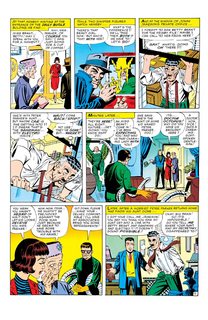 DOCTOR OCTOPUS: He's almost unconscious!! I can't believe it!! He doesn't even struggle as I try to remove his mask! There can only be one answer... I should have known!! It isn't Spider-Man! It's that weakling brat, Peter Parker! 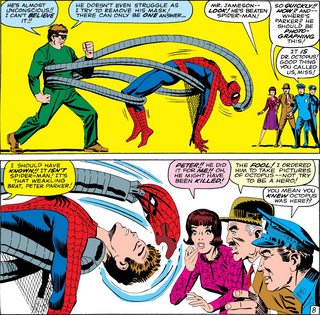 DOCTOR OCTOPUS: Bah!! Take your puny hero! He's of no interest to me! It's the real Spider-Man I'm after!! 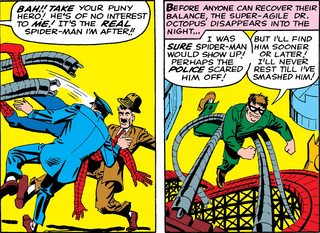 Ock didn't realise that Peter genuinely was Spider-Man until he unmasked him for a second time during the "Clone Saga" storyline in the 1990s.

DOCTOR OCTOPUS: I remember unmasking a considerably younger Peter Parker many years ago. For reasons which I now forget, I refused to believe that you were truly Spider-Man! It's almost funny how easily reality can be manipulated to assume any appearance. 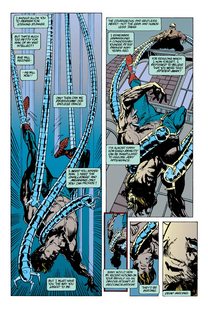 7
In "One More Day," did Spider-Man really have to make a deal with Mephisto?
1
Why would you call yourself "the Sinister Iceman"?
5
Is there an alternate timeline where Uncle Ben survives and Aunt May doesn't die?
9
Why did Green Goblin ask Aunt May to complete the prayer?
27
Why did Otto Octavius use tentacles mounted on himself instead of remote controlled robots?
1
Does Aunt May ever (permanently) learn that Peter is Spider-Man?
10
Who are the most Sinister Six?
10
Why did Miles Morales get non-spider-like powers (bio-electrokinesis and invisibility) that are vastly different from the other spider people?
19
Why was Electro summoned by Dr. Strange's spell?