I am trying to find the title of a novel I read a couple of years ago. I think Baen was the publisher but I might be wrong about that.

The main character was a fighter who always imagined "if I was the greatest fighter in the world, what would I do?" The book starts with him on the edge of a forest known for harboring the Fae.

While resting under a tree a "magic being" walks out of the forest and says to him that the first person who asks him for a favor he must agree. The "magical being" looks like a person except in almost supernatural good health and without a face instead having a face shape that constantly changes color. Being fearful of what a Fae lord would do to him if he refused he agrees. The "magical being" leaves, leaving him alone at the edge of the forest.

Entering the arch leads them to another world. When they arrive the man and woman explain that they are humans from another world and that his world was settled by them a long time ago and that they have back-slid in technology. The stone arch is in fact part of a portal system and they are a princess and her chief general/guard on their way to a rival empire. The empire is run by colonies of giant praying mantises who are encroaching on the princess's worlds. The princess and her general are trying to use the mantis's law about new queens to make the mantises recognize the human empire as another kingdom and not take over their worlds. There are many rules for new queens to be recognized such as their retinue or that the princess must be unscarred.

They are temporarily safe in the new world as it is considered neutral and they should not be attacked. Going to into the new world's city they purchase disguises to hide from any pursuers and blend into the city.

I do not remember enough detains of their travels to put anything in any sort of order but the main character gets separated from the group a couple of times and is also taught by the general about the mantis's weak points and method of fighting. During their travels the princess is wounded seriously enough to scar although it does not endanger her life.

Arriving at the dueling grounds the general convinces the bugs that the princess counts under the bug's laws for new queens and the scar is just a birthmark. The general fight the bug's champion and very quickly dies. The main character sees this and realizes that all their plans are going to go to waste.

Realizing that they have another female who can qualify as "queen" and male who can be her champion they convince the bugs to allow the main character to fight. Desperate the main character thinks about how he won every other fight of his life up to this point. Thinking about what the "Worlds Greatest fighter" would do he throws out almost all of what he was taught by the old general and fights the bug champion. Winning the fight his friend from the village is acknowledged as a queen.

Going back through the portals they end up back on their old world; because of the way the portals work it is a few hours before they leave at the beginning of the book. The main character leaves his companions to meet his past self who does not recognize himself because of the disguise.

I haven't read it myself, but some searching suggests this might be The Golden Queen (1994) by Dave Wolverton (reprinted in 2014 as by David Farland). 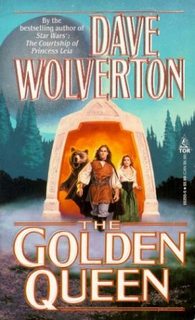 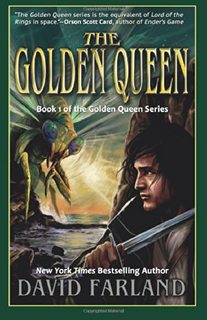 This review on Goodreads contains many of the plot elements you recall:

The book starts off with two residents of a small village, Gallen and Maggie (oh, and intelligent talking bears, lots of those), who come across a very foreign looking man and woman, being followed by weird ogre-bug things, and end up getting swept up into the story of the couple, who travel to other worlds.

The worlds are being threatened by a massive colony of bugs, with a hive mentality, and are trying to make all other sentient life become part of the hive.

According to the rules, a "golden" or perfect bug queen can challenge the residing Golden for the thrown. No human, or humanesque individual has yet to do so, and that's Everine's plan to win back her people, and the planets.

Another review notes that the story begins in:

what originally appears to be a tale about slightly-not-normal ancient, rustic Ireland.

9
90s fantasy book: man can access a parallel medieval world while 'dreaming'
13
Fantasy novel, magic sword and different worlds
8
Young adult book about a boy(?) who gets sent through a portal to another world which is really the distant future
4
group of girls travel through a portal with individual paperweight things that act like keys
4
I’m trying to find a book about portals to other dimensions
18
Short story about a group marching through a tunnel lined with portals, with each individual seeking the specific portal that leads to their "home"