What is the nature of the relationship between the Frank Miller Batman and the better-known Batman with the no-killing rule?

I grew up with the belief that Batman is famous for his “no-killing rule”. However, recently I have just found out that there is a version known as Frank Miller Batman who did kill a lot of people.

Most articles referred to something really old such as comics from 1940 or films from 1980s, which I have not seen because it was before I was born. It’s not that I am not interested in old movies or comics; just that I did not grow up with those things, so unless I am a die-hard fan, I wouldn’t know or go searching for them without Google. Those articles said that Batman films or comics featuring Frank Miller Batman did show him killing people.

Since I am pretty new to the Batman universe, I am confused whether Frank Miller Batman is regarded as …

When I found out, those articles were not being very clear nor consistent. Some said he was a slightly older Batman, whose life was ruined when many of his criminal enemies, who he let live, came back to hurt him or his loved ones. Another said it was an earlier-state Batman. I don’t know which is true as I am new to the Batman universe. I do know what Batman is when people talk about him in a conversation and know that it refers to movies/comics, but I am not that much of a fan to know everything else.

This is potentially a very complicated question to deal with, due to the fact the continuity of the main DC universe comics has been rebooted multiple times, meaning that there've been different versions of Batman (from different realities) that were the main comics version of the character at different points in time.

The short answer to your question though is that the "Frank Miller Batman" you mentioned exists in an alternate reality, separate from the ones the main versions of Batman exist in.

In 1986, DC published a four-part miniseries written and drawn by Frank Miller, and titled Batman: The Dark Knight Returns. This story featured a version of Batman who was significantly older than the one appearing in the main Batman comics at the time. He had grey hair, and was somewhat past his prime, athletically speaking, but still capable of similar physical feats to those of the regular Batman, and posed a threat even to the Superman of his universe, due to his high intelligence, vast resources, and tendency to plan ahead. He was also more ill-tempered and cynical than the main version of Batman, and had no qualms about injuring criminals so severely that they might possibly be left permanently crippled.

POLICE OFFICER: You're under arrest, mister. You've crippled that man! 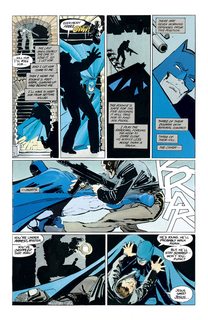 During an especially violent battle in Batman: The Dark Knight Returns #3 -- where Batman was seriously injured, and being repeatedly stabbed in the gut by the Joker -- he partially snapped the Joker's neck, as a means to paralyse him and end the fight. This didn't kill the Joker in and of itself, but the Joker wanted the authorities to believe Batman had killed him, so he deliberately laughed so hard that he fully snapped his neck and killed himself. When his body was later discovered by the police, they assumed Batman had killed him, and Batman subsequently became a fugitive from the law. 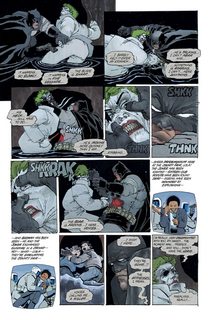 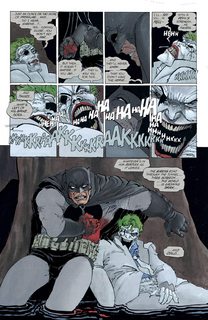 Around the time this miniseries was initially published, there was no official name for the reality the story was set in. However, in 1994, the same version of Batman appeared in an inter-company crossover issue with the Image Comics antihero, Spawn, and it was clearly stated on the credits page that the story was a companion piece to Batman: The Dark Knight Returns, and didn't represent current DC continuity. This issue was written by Frank Miller and drawn by Todd McFarlane.

Spawn Vs. Batman is a companion piece to DC Comic's The Dark Knight Returns. It does not represent current DC continuity.

Batman didn't kill anyone in this crossover, and clearly disapproved when Spawn casually killed a criminal in front of him.

SPAWN: You be careful, old man -- you be nice and sweet and careful. That woman's about to end everything and I'm stopping her and I don't care if it kills me all over again to do it. 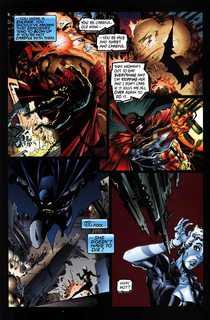 At the end of story, Batman told Spawn that he found his "disrespect for human life" to be detestable, and that while he lacked the power to take him down now, he'd acquire the necessary power and then come after him in the future.

BATMAN: Your methods are revolting. Your disrespect for human life is detestable. Your lack of discipline is nothing short of embarrassing. We'll meet again.

SPAWN: You'd better hope we don't. I could have you for breakfast -- and if you step on my turf again, I will.

BATMAN: I don't have the power in hand to bring you down right now, boy -- but I'll get it -- and we'll meet again. 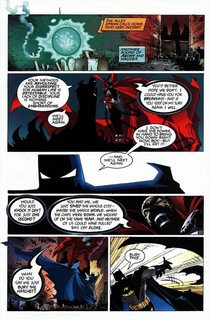 After fifteen years, the long wait for the sequel to The Dark Knight Returns is over! Frank Miller and Lynn Varley -- the multi-award-winning team responsible for the original series — have united once again to set up an astonishing new standard in comic book entertainment.

Again, Batman didn't directly kill anyone in this story. However, he congratulated Hawkman's son for having killed Lex Luthor, and it was implied that Batman had planned for that to happen.

BATMAN: To distract you. I have another operation in progress. Besides, I -- hell -- I just had to be here. To see that look on your face. It was worth it. Heads up. That window behind you is about to explode. And you're about to die. 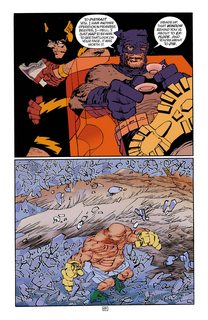 During 2005-2008, DC published an ongoing series written by Frank Miller and drawn by Jim Lee, titled All Star Batman and Robin, the Boy Wonder. In the seventh issue of this series, Batman is shown to kill several armed criminals, setting them alight and beating them up whilst they burned to death. He also manoeuvred some of them into killing one another with friendly fire.

BLACK CANARY: He doesn't stop. He doesn't spare a one of them. Not a one. Before I can even catch my breath, they're a bunch of bleeding, burning heaps, they are. And God help me, here I am thunderstruck in love with the man. The goddamn Batman. 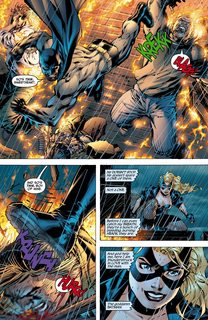 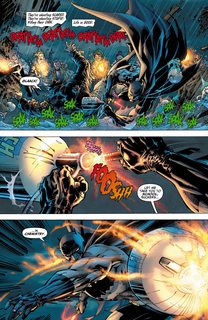 The Batman featured in this series is much younger than the one shown in Batman: The Dark Knight Returns, but according to the artist, Jim Lee, the series is set in the same continuity as the earlier story, presumably serving as a prequel to it.

JIM LEE: Basically, I was doing All Star Batman and Robin with Frank Miller, and that came to a screeching halt when I was working on DC Universe Online, and then all the stuff with the co-publisher. That whole negotiation, or discussion, when that first started happening last fall. But I had a chance to sit down with Frank, after the announcement was made that I was co-publisher, and we figured out a game plan. And basically, we've rebranded the title 'Dark Knight: Boy Wonder', 'cause it really doesn't fit in the All-Star universe. It's always been, really, from day one, an awkward fit. It's actually more in the Dark Knight Returns universe that Frank Miller created. And so Dark Knight: Boy Wonder will really tell the second half, the ending, to the first half that was told in All Star Batman and Robin.

If you'd like me to expand more on the differences and relationships between Prime-Earth and New Earth, and the other realities that have served as the main DC universe at one time or another, feel free to post a separate question about that. The bottom line though is that the "Frank Miller Batman" you mentioned exists his own reality, separate from all of those.

As an additional note, in 1987, Frank Miller also wrote and drew a four-part storyline titled "Batman: Year One", which appeared in Batman Vol. 1 #404-407. This served as a new origin story for the main comics Batman of the time, the New Earth Batman. However, from what I've been reading online, it's apparently also considered to be an origin story for the Earth-31 Batman.

Not the answer you're looking for? Browse other questions tagged dc batman frank-miller or ask your own question.

16
Who or what was controlling Batman when he painted this room yellow?

10
How many people who weren't superheroes did Batman reveal his identity to?
16
In comics does Batman have a rule against killing?
12
What was Miller's intention for this scene of The Dark Knight Returns?
10
Should I start reading batman from the start or from the new 52?
10
How long has Batman been "The World's Greatest Detective"?
7
Did Batman ever date Poison Ivy or have sex with her?
9
Are there any other examples of a Batman - Batgirl relationship besides the one given in "The Killing Joke Movie"
1
Was the chaotic ending of "Dark Knight Strikes Again" intentional?
6
Has Batman ever unintentionally/accidentally killed someone?