Who is Dumbledore calling the "wrong man" when he accuses Fudge?

In Harry Potter and the Order of the Phoenix, at the end of the climax in the Ministry, Dumbledore tells the shocked Cornelius Fudge:

"Cornelius, I am ready to fight your men - and win again!" said Dumbledore in a thunderous voice. "But a few minutes ago you saw proof, with your own eyes, that I have been telling you the truth for a year. Lord Voldemort has returned, you have been chasing the wrong man for twelve months, and it is time you listened to sense!"

Who is the "wrong man" that Dumbledore is accusing the ministry of chasing for twelve months?

The first name that comes to mind is Sirius Black... but the Ministry has been on his case for much longer than twelve months (it's almost three years since the start of Prisoner of Azkaban at this point). So who else is the Ministry (wrongly) devoted on hunting down? Or did Dumbledore forget how long the Ministry has been looking for Sirius?

Note: Twelve months prior to this incident, which would have been June 20, 1994, is around the time Harry Potter returned to Hogwarts with Cedric's body at the end of the Third Task. Did the Ministry even start chasing anyone at that time?

Earlier in the book, Dumbledore tells Harry about how Fudge is jealous and wary of Dumbledore, and how Fudge feels that Dumbledore (a more powerful and popular wizard) threatens Fudge's position as Minister. Fudge believes Dumbledore's (and Harry's) assertions of Voldemort's return to be fabrications in order to engineer the replacement of Fudge by coup.

This is why Umbridge is sent to Hogwarts - to assert Ministry control and undermine Dumbledore.

While Harry is also targeted by Fudge, it seems Fudge considers him to be a pawn of Dumbledore's.

you have been chasing the wrong man for twelve months

Means that instead of listening to Dumbledore and acting against Voldemort, Fudge has been wrongly persecuting Dumbledore, who has:

been telling you the truth for a year.

Just to provide a little more support for this interpretation - this speech is also made right after Fudge was about to order the Aurors to "Seize him!" - with him very obviously being Dumbledore at this point:

He looked wildly around at the Aurors he had brought with him and it could not have been clearer that he was in half a mind to cry, "Seize him!"

"Chasing" Potter might fit, but it doesn't account for how Fudge is threatened by Dumbledore nor his actions against Dumbledore.

I disagree with HorusKol's answer. The only answer that makes sense to me is Sirius Black.

What does it mean to be "chasing the wrong man"? It means that while the Ministry's attention should have been on dealing with Voldemort, they were chasing someone else in the same way that they should have chased Voldemort - blaming someone else for the things that Voldemort was doing in that year.

And yes, the Ministry had been chasing Sirius Black for much longer than twelve months. But, given that they didn't know about his innocence, it made sense for them to be focusing their attention on him during PoA (when even Harry and Dumbledore didn't know about his innocence) and GoF: he was (apparently) the most dangerous criminal around at that time. After the return of Voldemort, it made no sense from any point of view to continue focusing on Sirius: even assuming he was a Death Eater, he'd be then only the second most dangerous Dark Wizard on the loose, and targeting Voldemort would most likely find him too.

What the Ministry should have done, if they'd accepted the return of Voldemort but still seen no evidence of Black's innocence, was to keep chasing Black for two years until Voldemort's return and then turned all their resources on dealing with Voldemort. Instead, they continued chasing the wrong man for a further twelve months, until he was dead and his case was a moot point.

He is referring to multiple people 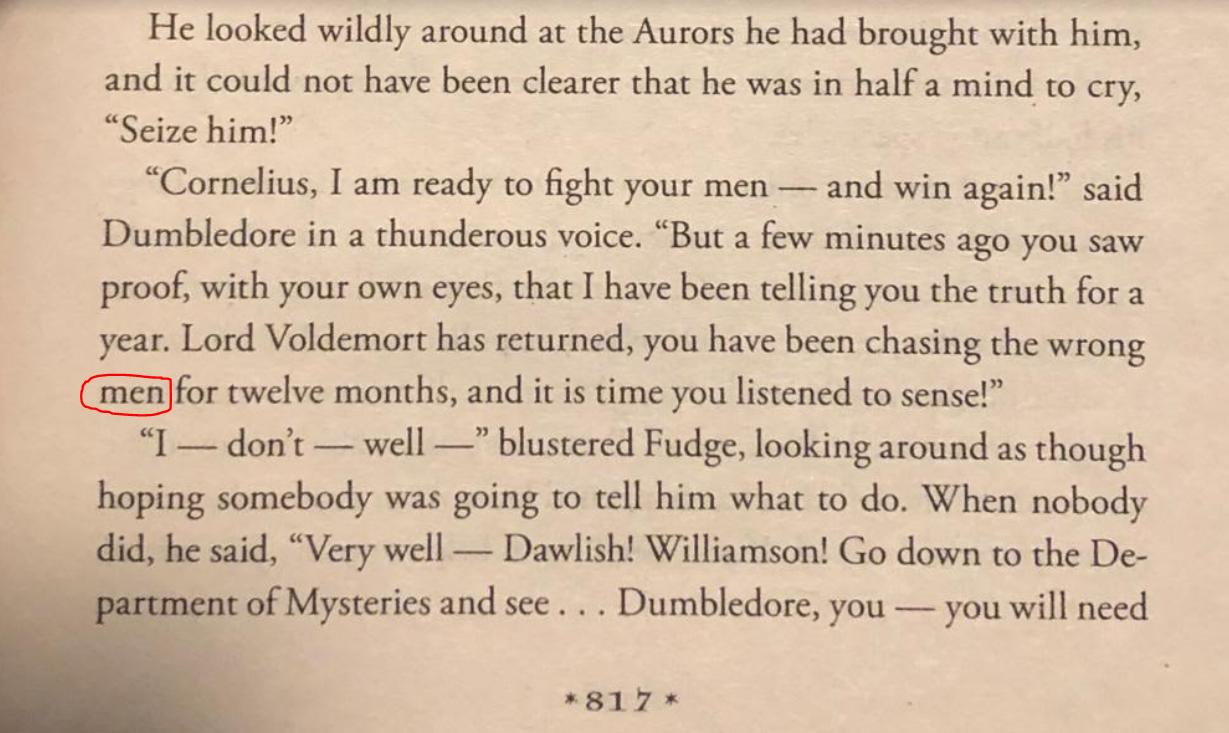 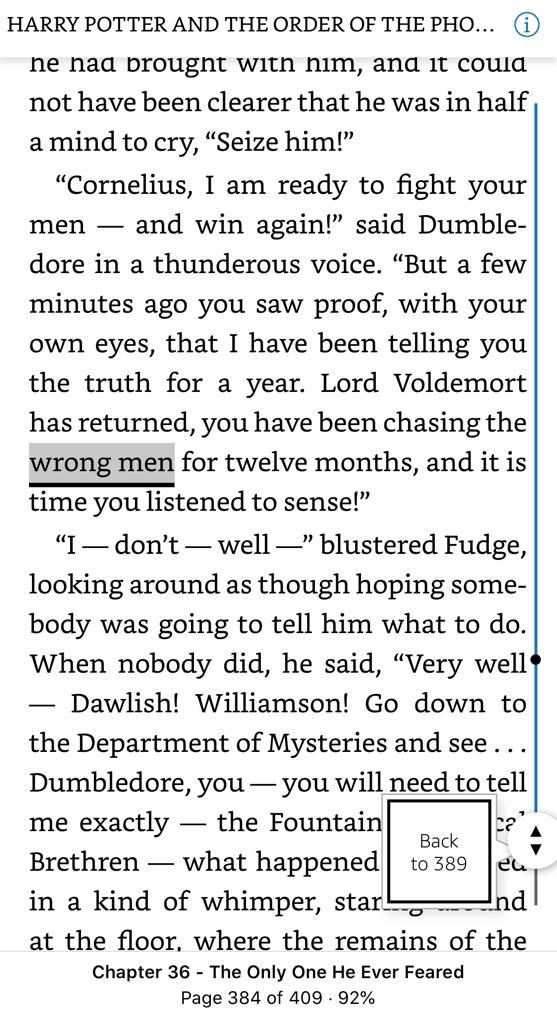 Dumbledore thus does not refer to any particular individual; rather, he refers to Fudge's general operations over the last year in which he targeted many people including Dumbledore, Harry, Sirius, and others who peddled the narrative of Voldemort's return. Indeed, almost immediately thereafter, Dumbledore mentions someone else that Fudge has been targeting:

“You will tell your Aurors to stop searching for my Care of Magical Creatures teacher so that he can return to work.

Not the answer you're looking for? Browse other questions tagged harry-potter albus-dumbledore ministry-of-magic or ask your own question.

28
How did Fudge know that the Dementor tried to kiss Harry?
4
Couldn't Fudge stop the governors removing Dumbledore?
2
What did Rufus Scrimgeour do differently when he became the Minister for Magic compared to Cornelius Fudge?
73
Did Dumbledore lie to Harry about how long he had James Potter's invisibility cloak when he was examining it? If so, why?
3
Why didn't the Ministry of Magic investigate the killing of Dumbledore?
4
Where was Rufus Scrimgeour before Harry Potter and the Half Blood Prince, and what was he doing?