Looking for a picture of the doll that inspired J.R.R. Tolkien to invent Tom Bombadil

English Literature Professor Jane Beal, in her article "Who is Tom Bombadil?: Interpreting the Light in Frodo Baggins and Tom Bombadil's Role in the Healing of Traumatic Memory in J.R.R. Tolkien's Lord of the Rings" published in 2018, wrote that J.R.R. Tolkien invented Tom Bombadil inspired in a brightly dressed, peg-wood, Dutch doll, with a feather in his hat, that belonged to his second son, Michael.

According to Humphery Carpenter in his biography of Tolkien:

…Tom Bombadil was a well-known figure in the Tolkien family, for the character was based on a Dutch doll that belonged to Michael. The doll looked very splendid with the feather in its hat, but John did not like it and one day stuffed it down the lavatory. Tom was rescued and survived to become the hero of a poem by the children’s father, ‘The Adventures of Tom Bombadil’, which was published in the Oxford Magazine in 1934. It tells of Tom’s encounters with ‘Goldberry, the River-woman’s daughter’, with the ‘Old Man Willow’ which shuts him up in a crack of its bole…with a family of badgers, and with a ‘Barrow-wight’, a ghost from a prehistoric grave of the type found on the Berkshire Downs not far from Oxford.

As far as I know, the only characteristic of Michael's doll present in Tom Bombadil is a hat with a feather as described in "The Adventures of Tom Bombadil (1962)", a collection of poetry by J. R. R. Tolkien.

Old Tom Bombadil was a merry fellow; bright blue his jacket was and his boots were yellow, green were his girdle and his breeches all of leather; he wore in his tall hat a swan-wing feather. He lived up under Hill, where the Withywindle ran from a grassy well down into the dingle.

Patricia Reynolds, writer and archivist of the Tolkien Society, wrote an article entitled The Real Tom Bombadil that depicts an example of how the doll may have looked. The article was included in Leaves from the Tree: J.R.R. Tolkien’s Shorter Fiction, a collection of the proceedings of the 4th Tolkien Society Workshop, held in Beverley in 1989. Sadly, I couldn't find the mention drawing.

I ask if there is a picture of the doll or a similar toy produced.

First of all to add to your references, there is an account reported from a conversation with Father John Tolkien in Mallorn 5, which confirms the story and says that doll was dressed the same way as Tom Bombadil.

Other stories not recorded were of Tom Bombadil who later appeared in LotR, and who actually existed in the form of a dutch doll who wore the same bizarre clothing as mentioned in the text.
Mallorn 5

But as for a picture of how the actual doll had looked, Patricia Reynolds's article "The Real Bombadil" goes through some of the history of what "Dutch dolls" are and where they originate from, different names they have been known by and how they look. In particular, she identifies a few characteristics of Tom Bombadil that seem similar to a Dutch Doll.

Some of Tom Bombadil's Dutch doll-ness is apparent when he first appears in The Lord of the Rings: he 'stumps along', 'his face was red as a ripe apple' but it is the hobbits who 'stopped short, as if they had been struck stiff'. Tom has 'thick brown hair'. His dancing is described as 'capering'.
"The Real Bombadil", Leaves from the Tree: J.R.R. Tolkien's Shorter Fiction

She also says that in her research she did see a Dutch doll that was dressed like Tom Bombadil.

I have met one Dutch doll dressed very like Tom Bombadil. He was part of Queen Victoria's collection, now in the Museum of London. As a child, Victoria and her ladies-in-waiting dressed dozens of Dutch dolls. Perhaps 'costumed' would be a better term, for she named the dolls for her favourite actors, dancers and opera singers and dressed them as she saw them on stage.
The doll like Tom is dressed as the Earl of Leicester in a dramatisation of Scott's Kenilworth; he wears a blue silk suit and a jaunty hat with a long curling feather. He has a wisp of a painted beard and thick, curling, painted hair.
"The Real Bombadil", Leaves from the Tree: J.R.R. Tolkien's Shorter Fiction

A picture of the doll is included in the article, though printed in black and white.

A better picture of this doll can be found online, shared in this blog post. (Thanks to Valorum for finding this for me.) 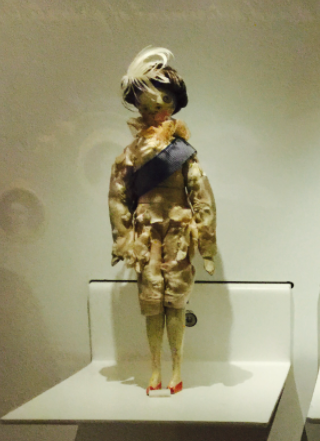 26
Where did J.R.R. Tolkien state that Arwen suggested that Frodo be allowed to sail West?
24
What happened to Tom Bombadil when the last ship left for the Undying Land?
33
Did J.R.R. Tolkien plan for the ring to be Sauron's?
84
How did J.R.R. Tolkien learn about the events of his books? (In-Universe)
17
Did the Ring in fact affect Tom Bombadil?
21
What was the first story set in or about Middle Earth that J.R.R. Tolkien wrote?
79
In Tolkien's opinion, does Tom Bombadil (and the concept of pacifism) actually hold any power?
5
Is there a full text search engine for the works of J.R.R. Tolkien?
26
Is "The Adventures of Tom Bombadil" considered official canon?