Comic book - Man inherits a property (a church?) inhabited by monsters, falls in love with a water monster

I don't remember exactly when I read this, but it was probably at least in college, and before I met my wife, which places it somewhere between 2000-2010. The protagonist is a caucasian adult male who, at the start of the comic book, has inherited a property. I don't remember if it was through a relative dying, or if he gained it as part of his job, because part of me wants to cast him as a religious person of some sort, and this was a church he was supposed to be caretaker for (sexton?). Shortly after settling in, he learns that the place is a sanctuary for a variety of monsters, although the details of them escape me. The only character I remember distinctly was some sort of a water monster, female, more overall fishlike than the typical mermaid, and I think with a normal bipedal build, with two arms and two legs. The two of them have a romantic relationship that was building up over the course of the book, although I don't think it had actually culminated at the time I stopped reading, possibly due to their differences of species. Monsters are not something which is common knowledge, and I think one of the central bits of the plot is that the main character has to protect the monsters from the townsfolk by keeping their existence secret, and providing for them, to avoid an angry pitchfork and torches mob situation. I want to say that the monsters included a vampire and a mummy, but again, my memories are very fuzzy.

As I recall it, the primary artwork was black-and-white, done in a mildly cartoonish style, not realistic but also not exaggerated. I think the covers were in color, which showed that the female monster love interest was blue. I think that she had fleshy growths coming off of her head, although I don't recall if they were fin-like ears or protrusions.

Following the idea of it being a church that the main character inherited, and my recurring idea that he was its sexton, I started looking for keywords involving it being a church or similar property, and finally wound up with comic book man inherits graveyard monsters, which brings up Boneyard (an archaic term for a graveyard). 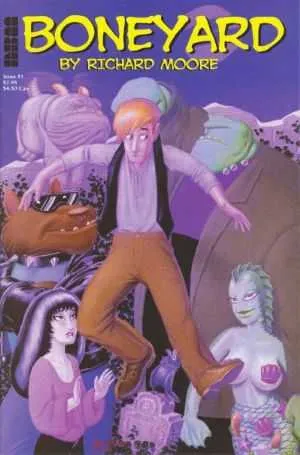 Boneyard is a fantasy comic book series by Richard Moore that ran from 2001 to 2009. It tells the tale of Michael Paris, a young man who inherits a plot of land in a town called Raven's Hollow. That plot of land turns out to be a graveyard, inhabited by an array of monsters. Fortunately, the monsters are quite friendly. They include Abbey, a beautiful vampiress; Ralph, a werewolf; Sid, a dirty old skeleton; Edgar, a talking, glasses-wearing raven; Hildy, a homely witch; Nessie, a busty, nymphomaniac gillwoman; Brutus, her unspeaking and enormous Frankensteinian husband; Glumph, a short and obnoxious demon/mad scientist; Leon and Boris, a pair of very silly gargoyles; Nightcrawler, some kind of worm-thing; and Mr. Vincent, a mortician who's a little overfond of his job.

On the downside, the Devil wants the graveyard for some reason, and is constantly trying to trick Michael into giving it to him.

Mostly humorous, with occasional dramatic touches and a romantic subplot.

So part of what I got wrong was that while Nessie, the "Black Lagoon" character, was indeed pursuing him romantically, the actual love interest is Abbey the vampire. And also, it seems Nessie is a greenish-blue and some pages are in color, as per the the following, which has a better splash of the characters in the graveyard. 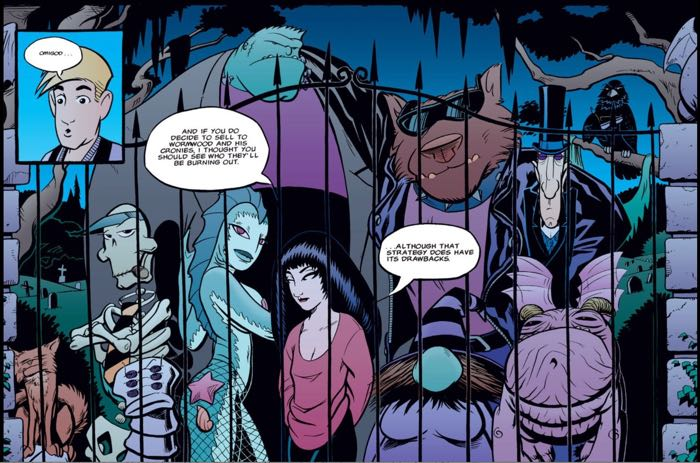 9
Science fiction novel about a man who travels through time and falls in love with a warrior woman
6
Illustrated book with a teenage vampire, werewolf & two Frankenstein's monsters at school
8
Book with man and female AI, possibly in space
3
80s Comic Book issue with young team battling villain wearing power armor
9
Sega Genesis game where you coached a monster that fought in tournament battles. After fights, you could blend your monster with the opponent
7
Comic Book Identification - many eyed floating alien monsters in underground caverns in the desert