I’m looking for an episode of a childrens’ cartoon featuring a young (teenage?) astronaut. As far as I recollect, he was flying a red-white striped rocket (not unlike Tintin’s rocket, but my memory might conflate things a bit.) I seem to remember that his name was Archie or similar, and that he built his rocket himself.

The specific episode, that I have in mind, is a rather philosophical one for a childrens’ show. He lands on a flat disc and on examining it he learns, that on that disc people live in a 2D world. That is, they have no height at all and are 2D in a strict sense. The protagonist explains these features in a (for a young viewer) rather consistent and fascinating way.

I’ve seen the cartoon in the mid 90s. But I’m rather sure, that it was a re-run and produced much earlier, perhaps late 70s? The drawing style was somewhat naturalistic and the colors were a bit toned down.

The series itself was the second of three such series of cartoons about The Mézga Family.

The Mézga Family (in Hungarian Mézga család) is a fictional family from three animated TV series made by Pannónia Film Studio in Hungary between 1969 and 1978.

Scripts for the series were written by József Romhányi and József Nepp. Nepp also served as the film director. The series proved to be very popular, reaching cult status and televised, among others, in Czechoslovakia, Bulgaria, Romania, Italy, The Netherlands and both German states. The series still regularly appear on television. Each consists of 13 episodes.

This page talks a little bit about the 2D planet shown in "Második Dimenzió": 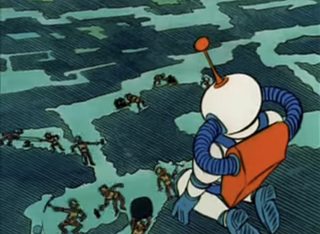 The picture above is Aladár on the flat, 2D planet. What I found interesting about this is that he wasn't able to touch or communicate with the inhabitants of the planet in any way since they couldn't perceive him because he was 3 dimensional. I suppose that not being able to interact with the environment is also something that could be interesting to research further.

You can view the scene where Aladár's rocket ship lands on the disc-shaped planet at around the 8:21 mark in the video below:

Not the answer you're looking for? Browse other questions tagged story-identification spaceship cartoon or ask your own question.

1
1980s/90s cartoon about infected people with powers hiding in a fog?
5
80s anime cartoon with mechs
7
An old cartoon about an astronaut who lands on a planet, fights dinosaur-like aliens, then dies at sun down
6
Trying to remember an old cartoon with triangular spaceships
7
80s cartoon about a boy stranded on a planet
8
Cartoon or anime about people with elemental powers who could see auras
10
Cartoon series where humans travel by spaceship and find a planet with dinosaurs
4
Cartoon children's show with tribal-looking people printing money on leaves with stones
9
Cartoon (broadcasted in India around 2000s) where people fused with companion animals