Why did Frodo not bring a lot of money with him on his very possibly one-way escape out into the unknown?

When they first meet Strider in the Pony Inn, and he starts talking about wanting a "reward", Frodo, believing that he's referring to a monetary such, thinks about the fact that he only brought very little money with him, and he "cannot spare any of it".

I find this extremely bizarre and illogical.

Long before he sells Bag End and executes his initial plan to discretely retreat to his "new home" from which they will immediately disembark into the unknown, wouldn't it have been logical and necessary to sell as many things as he could possibly get away with without causing too much suspicion, or otherwise collect money or easily portable valuables of some sort (for example, gold nuggets or coins), in order to fund his own expenses out there in the world?

Even if he might have been naĂŻve enough himself (and the same goes for the other Hobbits in the eventual party) to assume that there will be random friendly elves or a Tom Bombadil to provide wonderful food for free and lodging at no charge whatsoever in every little village and corner of the world, wouldn't Gandalf have gone over this with him in detail? Why take such a massive risk to starve to death and have no proper place to sleep? Not to mention all the possible situations where they could get out of trouble by simply paying somebody?

Frodo makes it very clear that he expects to not ever return, or at least that this is the most likely outcome. In fact, and I may be wrong about this, he appears to have zero real idea of what this journey will involve besides the "goal" of getting to Rivendell. It doesn't seem like any of them actually think about ever reaching and then throwing the Ring into Mount Doom. And they certainly could not expect to get there on their own with just some pocket money.

It's not like that they are going for a vacation in peace time with nobody in particular following them. He is literally fleeing for his life, with the entire world largely unknowingly relying on his Hobbit wits. And he takes off after all this planning with just a few bucks. It makes no sense to me. If anyone ever had a good reason to at least ensure some financial advantage for a trip, it's Frodo & Hobbit Friends.

Plus he isn't even a poor Hobbit to begin with. What's the point of leaving almost all of his wealth behind "just in case" when it could have done much more good hidden well on his person, or rather, split up evenly among them as to minimize the risk of losing it? I don't understand what he was thinking. And the others never seemed to have brought this up.

There is nowhere to spend money between Bree and Rivendell.

Frodo would have every reason to expect that he would need to pay only for a brief stay at the Prancing Pony and then would be off into the wild. 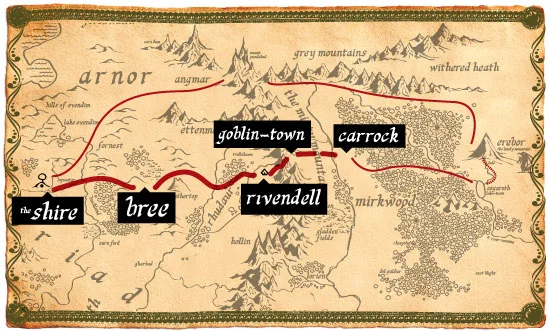 32
Why was a fox able to think about the hobbits on the road to Rivendell?
16
Why did Frodo travel with the elves who were leaving Middle Earth?
29
Why do people care so much for Frodo?
26
Why could Elrond not delay his one-way voyage to Valinor for a few more years?
48
Why did Sauron react the way he did when Frodo put the Ring on inside Mount Doom?
16
Why did Merry (apparently) not get to experience the first adventures with the other three hobbits?
4
Why did both Frodo and Aragorn keep Gollum a secret for seemingly no reason?
33
Does everyone always eat, drink and sleep for free everywhere in Middle-earth?
1
Why is Pippin thinking "mostly" of Frodo, ignoring poor Sam?