How big is the Gulf of Lune, actually?

When you look at this image from the end of Return of the King it seems the Gulf of Lune isn't as large as the Encyclopedia of Arda claims, namely that it would span more than two hundred miles.

It's not even twenty miles, and it seems as if Forlond (which should be to the right in the image) and Harlond (to the left) are connected to Mithlond, like an agglomeration. Perhaps this isn't the entire gulf. However, maps like the one in the link don't show any such landscape on them, except for the last two peninsulae of Lindon, which I identify in the image as those with the exceptional hills that look similar to each other. The entire Gondorean navy could easily fill the gulf and perhaps more ships anchored outside it during the battle against Angmar.

So the question is, how big is the Gulf of Lune actually; are there any numbers? If it really spans more than two hundred miles far (i.e. the above image isn't the entire gulf), where in the maps do we find the landscape portrayed above? Or if the above landscape isn't featured on the maps, then why not? Does the image above include Har- and Forlond?

As you can see from this rather snazzy map of Middle-earth (complete with annotations by Tolkien himself), the Gulf of Lune is approximately 200 miles in length, from the point at which it joins the Great Sea along to the Grey Havens, situated at the mouth of the River Lune. 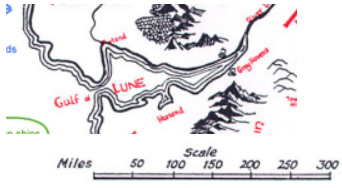 What you're looking at in the film is presumably the very end of the gulf, looking out toward the horizon, with some licence taken by Peter Jackson to make the city encroach onto the gulf in order to show more of its features. 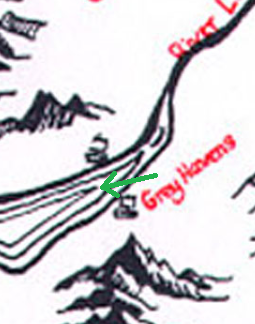 The script describes what we're looking at as an 'inlet'

ANGLE ON: ELROND, CELEBORN and GALADRIEL are waiting for them. The SETTING SUN slowly dropping behind the SEA ... visible between the HEADLANDS of a beautiful INLET.

Not the answer you're looking for? Browse other questions tagged tolkiens-legendarium middle-earth the-return-of-the-king or ask your own question.

23
How big were the Silmarils?
18
How Big Is the Eye of Sauron?
14
How big were Hobbit children?
15
How were the palantiri actually used?
18
What does Tolkien say about Ancalagon's physical appearance, especially his size?
5
How was the Atlas of Middle-earth measured and scaled?
10
How old is Middle-earth?
3
How similar is this scene in The Return of the King to the books?
12
How much did the livelihood of the Rohirrim rely on agriculture?