In episode 4 of Moon Knight,

after being shot by Harrow, Marc wakes up in a mental institution.

There's a game of bingo going on, and at one point the caller says:

"T-16" is not a valid bingo number, so I assume this is an Easter egg of some kind. However, I'm unsure what significance it may have.

TL;DR, T-16 is nonsense in both US and British Bingo, but the letter is purely an aesthetic/arbitrary item, so it shouldn't matter for a Bingo game

To answer the most immediate question, I don't know of anything in the Moon Knight mythology that ties into T-16, and I am in agreement with ShadowRanger that the most likely call-out would be to the Star Wars landspeeder. That said, I can address a bit of the aspect of Bingo rules and how they might apply.

As was noted in the comment, there was a promo image of the Bingo card, which looks like it matches what shows up in the episode. 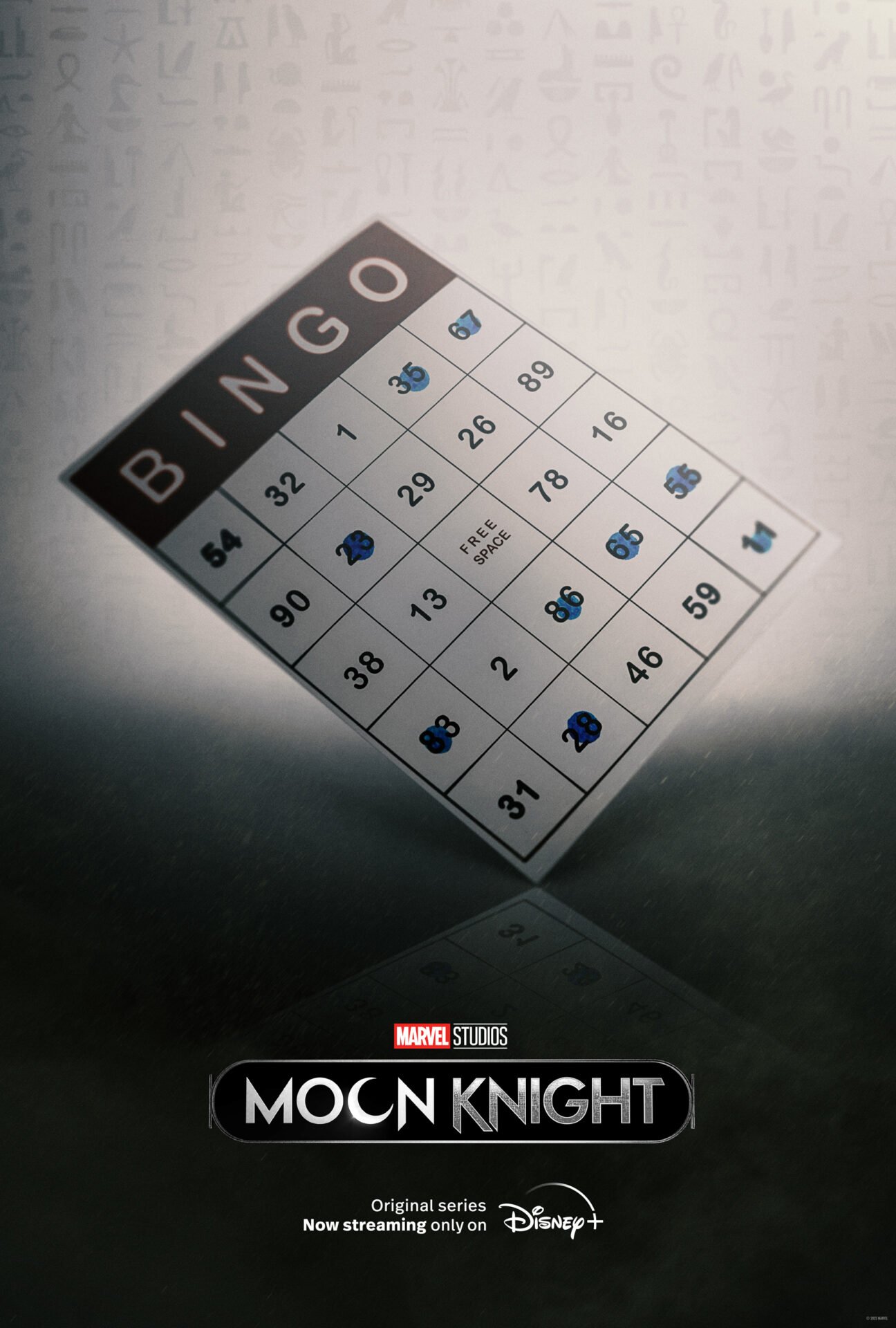 As a trained Bingo caller, there's a lot wrong with this card. United States Bingo numbers range from 1-75 with each letter assigned to a set of 15. B goes from 1-15, I from 16-30, and so on. The letter assignment is purely aesthetic, to simplify people checking multiple cards (playing four cards is the minimum where I call, and some players were operating north of 64 cards at a time. Columns mean they only have to check a fifth of their numbers, fewer for the N column that has the free space). I will note that, as a caller, stating the wrong letter does not change anything since it is the number that is being checked, but it will get you heckled.

As you may note here, the numbers exceed 75, and are in the wrong columns. This might be partially explained if what we're seeing is a mix of Marc and Steven's minds because UK Bingo (also called Housie) uses numbers from 1-90, albeit on a 3x9 card (with each column having 10 numbers possible) rather than a 5x5 card.

I haven't found any reference to UK Bingo callers using letters, but it's won by getting all 5 numbers in a row (no diagonals, verticals, four corners, big diamonds, or other patterns), which does match how Marc wins, having the last number called, and Bingo not announced until after the caller states the number (most Bingo halls will show a preview of the number before it is called to give people a chance to quickly check their cards to decrease the risk of someone missing Bingo being called since it usually must be on the last number called, particularly in money games). The promo image doesn't show the "2" daubed, but that generally is not required either, only having that winning card. The displayed card still could be a valid Housie result, since it looks like both 83 and 86 (which would both be in the eighth column, and therefore couldn't be on the same winning row) are daubed for the win, assuming that we're reading the card for a US Bingo win (although arguably, any set of 5 daubed numbers on the card could correspond to a valid Housie win if they're from a different range of 10).

Inconsistencies could just be in his head, or the caller's

The incorrect Bingo card, and the use of incorrect letter and number combinations could simply be because Marc is only familiar with Bingo on a surface level. Much like how, if you asked someone who doesn't play chess to make up a board position, they're likely to create positions that couldn't actually exist due to how the pieces move and interact, it's possible that he just knows that Bingo involves letters and numbers, and he doesn't know how they correlate, or what range the numbers can use. Similarly, the caller, who might be a fellow inmate at the asylum, might be confused and assigning random letters or misreading the ball (An uppercase T looks a lot like the uppercase I that would be on the 16 ball, particularly if you're holding it such that your finger covers part of the ball), or they might just be pulling the letters and numbers out of thin air.

Likely a throwaway reference to the T-16 airspeeder from Star Wars; I haven't rewatched Star Wars in years, but I still clearly remember Luke telling a fellow pilot (who did not believe anyone could hit the 2m exhaust port on the Death Star) "I used to bullseye womp rats in my T-16 back home. They're not much bigger than two meters." Presumably throwaway references like that are expected to be recognized by a non-trivial fraction of their viewers. Disney owns all the IP, so why not cross-reference within their properties?

Given the number involved couldn't possibly show up on a Bingo card (and several other numbers are also nonsensical), I have to assume the game was either run by someone making random references rather than actually drawing normally, or it was implying the observer was in fact losing their sanity and hearing nonsense, either of which makes sense in the context of a mental institution.

T-16 may be a reference to the QNB-T16 truth serum from Agents of Shield.

"This is QNB-T16, it's the top-shelf martini of sodium thiopental. It's a brand new and extremely potent truth drug. Don't worry, the effects only last about an hour." -Phil Coulson to Skye

While the other answers are the most probable, I would also like to point out that the caller does say "16 t" as well. The Skoda 16 T is a Polish train that is also called the Elektra.

Not the answer you're looking for? Browse other questions tagged marvel marvel-cinematic-universe moon-knight-2022 or ask your own question.