What did Obi-Wan Kenobi and Chewbacca talk to each other about at the Cantina?

Early in the movie Star Wars: A New Hope (1977), at the Mos Eisley Spaceport cantina, while looking to hire a charter for Alderaan, Obi-Wan Kenobi is introduced to Chewbacca by BoShek. Near the bar, the old hermit and the towering Wookie start a murmured conversation. They talked in the Wookiee language that, by that time, Luke didn't understand.

Regarding the mentioned scene, here a couple of Canon references:

From the Star Wars A New Hope novelization we can read:

In the course of the conversation the old man had occasion to gesture in Luke's direction. Once the huge anthropoid stared directly at Luke and let out a horrifying howling laugh.

Disgruntled by the role he was evidently playing in the discussion, Luke turned away and pretended to ignore the whole conversation. He might be acting unfairly toward the creature, but he doubted that spine-quaking laugh was meant in gentle good-fellowship.

From the Star Wars A New Hope movie Script (4th draft) we can read:

Ben speaks to the Wookiee, pointing to Luke several times during his conversation and the huge creature suddenly lets out a horrifying laugh. Luke is more than a little bit disconcerted and pretends not to hear the conversation between Ben and the giant Wookiee.

I assume that words and phrases like "to the Alderaan system", "no questions asked", "Yoda?", etc. could have been part of the conversation but I wonder if there is any Canon/Legend reference of the content of the aforementioned conversation between Obi-Wan and Chewie. 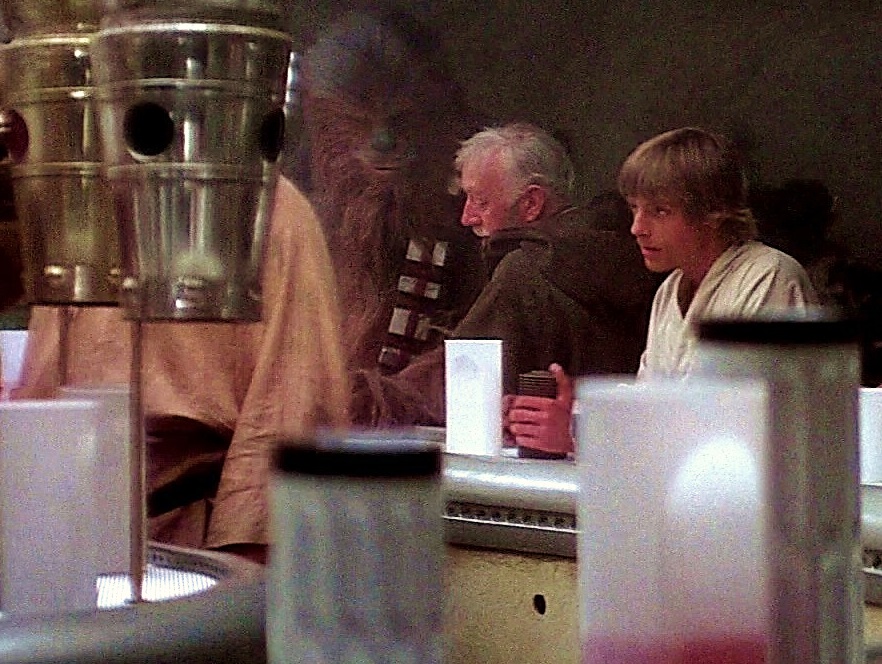 Ben watched as Luke dismissed C-3PO, who turned to exit the bar with R2-D2. Assured that no harm had occurred, Ben returned his attention to the Wookiee while Luke moved to stand beside him at the bar. Facing Chewbacca, Ben said, “The Millennium Falcon, is that the name of your ship? I was told she’s fast.”

Chewbacca replied with a series of low barks and grunts. Fortunately, Ben understood enough of the Wookiee language to reply, “No, that will be more than satisfactory. I’m not looking for anything elaborate, Chewbacca, just quick passage to Alderaan —”

He turned as casually as he could and saw the old hermit and the boy in the doorway. The hermit’s eyes met his, and just a hint of a smile showed on his grizzled face. Leaving the boy with their droids, he walked straight up to BoShek and said in an astonishingly rich voice, “May the Force be with you, my friend.”

The Force? Had he really felt it just now? “I-uh-thanks,” BoShek stuttered. “How did you know … ?”

“Your struggles are as plain as words for someone who is trained to see them. I could teach you much, but I fear my time here is short I need passage off the planet. However, since I believe you have a ship, perhaps we could further both our quests at once.”

BoShek could, hardly believe what he was hearing. This old guy was practically reading his mind. BoShek had never told anyone about his fascination with the Force, yet here came this complete stranger who picked up on it immediately. But he’d gotten part of BoShek’s story wrong. “I wish I did have a ship,” he said. “But I’m just a pilot.”

“Ah, that’s a pity,” said the hermit. “Perhaps when I return we can discuss the Force anyway.”

Chewbacca growled softly, and BoShek took the hint. “I do know someone with a ship who might be willing to take on passengers, though,” he said, nodding toward the Wookiee.

Note that both of these are Legends sources. As far as I'm aware, there's no Canon confirmation of the conversation aside from Ben's second-hand reporting of it to Luke.